Civilian volunteers in times of crisis. 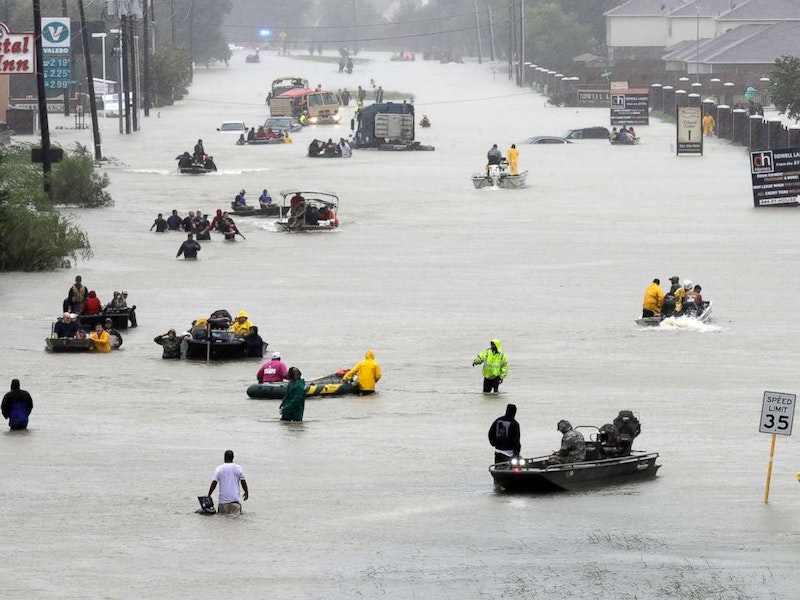 The continuing devastation brought by Hurricane Harvey has become one of the worst natural disasters in American history. According to the National Weather Service, the Gulf Coast of Texas has seen over 50 inches of rain, and that's before moving on to Louisiana. Gov. Greg Abbott has deployed the full Texas National Guard, and local emergency rescue efforts were quickly overwhelmed. The Federal Emergency Management Agency (FEMA) then issued a call for civilian volunteers to help with rescue operations.

FEMA's call was answered by the Cajun Navy, an informal consortium of Gulf Coast fishermen, outdoorsmen, and boating enthusiasts, in addition to former law enforcement and military members, who will use whatever resources are at their disposal to help those in need. Many of them are survivors of Hurricane Katrina and last year's flooding in Baton Rouge, and are putting their experience to use. They're in a unique position to help the people of Texas with a more thorough understanding of their needs, especially in regard to helping the elderly, the disabled, and with pet rescue. It's also been noted that smaller civilian boats can more easily maneuver around flooded residential areas. As a retired lieutenant general told The Washington Post: "They can handle their boats better than the average fireman, who handles a boat once a year during training. They use their boats all the time and know their waters, and know their capacity."

However, there are always those who embrace the gray cloud. I saw social media posts lamenting that the call from a federal agency for civilian volunteers was a sign of how dreadfully apocalyptic life in Trump's America has become. The reality is that in times of crisis, calls for civilian help are not unusual, especially for a crisis of this magnitude. Gulf Coast residents, in particular, anticipate flooding and hurricanes, and after the devastation of 1969's Hurricane Camille, the National Voluntary Organizations Active in Disaster (VOAD) was created in 1970. They’ve since become a nationwide organization that frequently works with FEMA to create local points of contact for relief efforts during natural disasters.

America has a long history of civilian volunteers in times of crisis, and it's largely unrecognized. Early settlers would pool their resources to survive, as would homesteaders during the country's westward expansion. The Civil War led to the creation of the YMCA, the United Way, and the American Red Cross. The first Volunteer Bureau was created in response to World War I. In addition to organized efforts, Americans frequently begin to be charitable within their own communities, like neighbors sharing food from their backyard gardens during the Great Depression. Or sometimes it's a little more substantial, like people opening their homes to those who lost theirs during the Great Recession. This informal tradition of hospitality has continued in regard to Harvey, with people opening their homes to displaced families.

Perhaps because of the recent film, the Cajun Navy has been frequently compared to the civilian response to Dunkirk. While not inaccurate, there is a similar, yet surprisingly little known, event in our own history. In the wake of the World Trade Center attacks on 9/11, the bridges and tunnels around Manhattan were closed. The only way to leave was by boat. Immediately overwhelmed by the amount of people looking to just get off the island, the Coast Guard and New York Port Authority put out the call to civilian boats in the area. In a spontaneous miracle, boats of every sort arrived—fishing boats, charter yachts, tugboats, and dinner boats. Making multiple runs throughout the day, these civilian volunteers were able to help evacuate almost half a million people from lower Manhattan in under 10 hours.

As noted above, many of those making up the Cajun Navy are disaster survivors themselves. They’ve not forgotten how the people of Texas stepped up to help during Hurricane Katrina and Baton Rouge floods. Louisiana Governor John Bel Edwards explained, "Nearly 12 years ago, Texans opened their doors to the people of Louisiana when Hurricane Katrina devastated our state. In 2016, Texas Taskforce 1 was dispatched to our state to provide support during the historic floods. We will do nothing less to support the people of Texas in any way that we can as they respond and recover from Hurricane Harvey."

As stories of local heroism emerge, one of my favorites has been "Mattress Mack," who has turned his furniture stores and warehouse into makeshift, pet-friendly shelters. Browsing his Twitter feed, it's also clear that local restaurants and food vendors are feeding the displaced. In addition, those same businesses are extending themselves to Guardsmen and other responders who are putting in long hours. Another amazing story is of a Mexican bakery whose staff was trapped by the floods. Over the course of two days, they continued to bake bread to feed their rescuers and other stranded people.

It’s clear that those participating in rescue efforts are putting their own lives at risk. In fact, many local first responders are people who have also lost their homes. While the more cynical people I've seen aren't numerous enough to comprise a vocal minority, that doesn't make them any less annoying. In times of crisis, the best anyone can do is help or get out of the way—and to know when they're not helping. Social media trolls never help.

The heroics and generosity that we've seen in the wake of this disaster are inspiring. It's a reminder that there’s tremendous untapped potential, and a willingness to be of service. The civilian response has already shown incredible resilience and ingenuity, and it’ll be necessary as affected communities work to rebuild. The most apocalyptic quality of what I would define as "Trump's America" is the self-aggrandizing, toxic extremes pulling at the fabric of our society. People are capable of putting their differences aside to keep civilization functional. Many of these volunteers have been, from a historical perspective, underappreciated because they have too much humility to demand recognition, operating with the view that the fruits of their labor are reward enough. Lincoln once expressed a wish for America to be seen as the last best hope on earth, and these are the people who make it so.