Nominating the Constitution’s most relentless defender would send an important message. 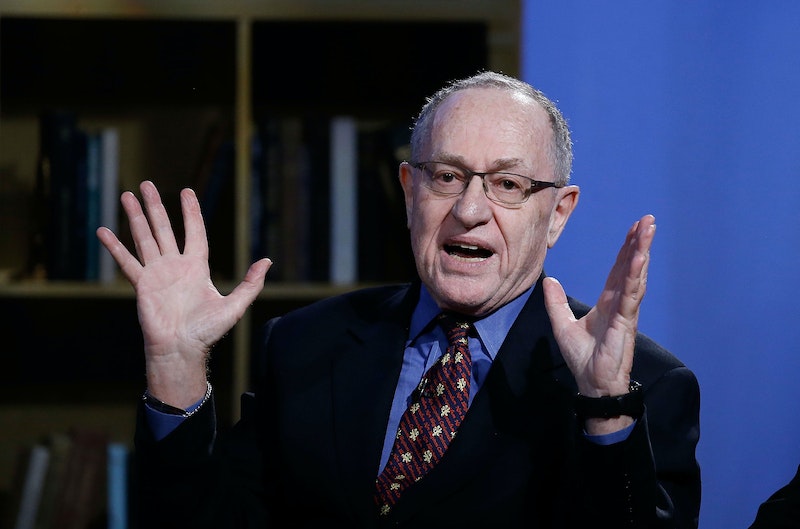 The second loudest roar out of Boston throughout this fall—next to the cheers and celebration that followed the final season of Red Sox slugger David Ortiz—emerged from the ever-smirking mouth of a particular savvy, liberal Democrat, Newsmax regular, Jason Chaffetz defender, and Friend of Megyn.

When Alan Dershowitz proclaimed in several interviews there’s no evidence he knows of that shows anti-Semitism in the career of Steve Bannon, Donald Trump’s selection for chief strategist, progressives and their media enablers lost their minds. It’d been a long week already, with the perpetual threat that Cornell students could run out of Play-Doh in their campus safe space.

Dershowitz quickly took apart the claims of the Bannon opponents. But perhaps Dershowitz watchers and fans saw the very public Bannon statements as part of a larger strategy, building since the summer. His prominent appearances this week, especially defending a Trump hiring, suggests he’s not just promoting a new e-book, which was right about major factors influencing the presidential election.

As the Trump Tower meetings continue, a question: Want to really make your opponents seethe? Trump, who has no discernible ideology, doesn’t care about offending conservatives, stomping on the necks of long-time Washington players, or worrying about the feelings of his antagonists, ought to send up the name of Alan Dershowitz for attorney general.

The two have common ground. Dershowitz, who calls himself a liberal and friend of Hillary Clinton’s, praised Trump as a “very effective candidate” in an interview a few days before the election. His views align with Trump’s in several important areas, and not just in support of Israel. Dershowitz wrote and spoke strongly against the Iran Deal. He criticized Black Lives Matter for what he saw are its anti-Semitic official statements. He regularly denounces threats to free speech endured by conservatives on American college campuses. On Megyn Kelly’s show he supported Rep. Jason Chaffetz’s efforts to gain more cooperation from the FBI—meaning fewer redactions—following hearings on the Clinton server investigation.

And Dershowitz has sent signals. In a Newsmax interview, Dershowitz was asked: If the Trump campaign asked you to advise them on Israel, would you be interested? “Sure,” he said, enthusiastically. “I’d accept anybody’s offer to advise them on the Middle East or on any other issue I care about.” Of course, the Bannon clamor itself is perhaps the loudest signal. The biggest moment in all of that was the MSNBC interview, a hostile environment relative to the issue at hand, but Dershowitz simply demolished Steve Kornacki. It’s also hard to believe that coincidence is the lone explanation for Dershowitz in that interview pointing to Rep. Keith Ellison’s connections to Louis Farrakhan, the same week Ellison is being considered for chair of the Democratic National Committee. Maybe this alone was the larger objective for Dershowitz.

The leap from informal Israel advisor to attorney general is not a small one. And could somebody with no law enforcement background whatsoever handle such a position? But Dershowitz would bring not only more than five decades of legal experience, outsized personality, and media brilliance to the task. Most importantly, he would bring The Dershowitz Style.

Charm, and then make your point. Smile while you annihilate bad ideas. Know the facts. Use facts to win, instead of personal invective. Invite the conflict. Just be prepared for it. If you can be extremely prepared, all the better. How much of these would Trump’s brash but otherwise awkward team benefit from embracing?

Another example from the MSNBC exchange this week: “Harry Reid, who I know very well and he’s a very good guy—I like him—should go to college campuses and see how unsafe they are for people on the right, for Christians, for Jews who support Israel,” Dershowitz said.

Dershowitz’s influence on a Trump administration and message, under constant attack, would be positive. Dershowitz is one hell of a self-defender. His assembly then deployment of factual refutation is to be studied. His op-eds are clinics in how to construct arguments. This is useful in a year in which “fake news” has been getting a lot of attention, and the Oxford dictionary has named “post-truth’ as its word of the year.” (Update: The Oxford Dictionary is no fan of Trump.)

And no, you don’t nominate an attorney general merely because of his effective style of debate, though talent at persuading those who oppose you as well as capacity to effectively repel critics go a long way in any high-level Washington job. The leading candidates also seem to be conflict embracers. Critics point out that if Trump selects Kris Kobach, this could mean Trump is focused on having someone in that position to defend and shepherd through his wall-building objectives. If he chooses Ted Cruz, this may signal Trump’s decision to go with more ideological style, and attack Roe v. Wade.

Just to extend the Dershowitz-as-attorney-general fantasy: There would be no way Dershowitz would take the job it he knew he’d be asked to prosecute Hillary Clinton. Trump’s supporters would have to content themselves with the knowledge that Congress will take care of the destruction of the person in question’s career legacy in its hearing rooms in the coming months.

Dershowitz has good instincts. One of his main points in his book is the electoral unpredictability of populism. On Nov. 3, he said: “The New York Times still has (Clinton) 85 to 15 percent. In terms of betting odds. Anyone want to make that bet with me? I will take that bet today.”

Sometimes Dershowitz veers from the Dershowitz Style and gets personal. But even then, the power of the result is entertaining, as when he called Bernie Sanders an “ignoramus” for Sanders’ inflated statements about West Bank child mortality rates. “He doesn’t know what he is talking about,” Dershowitz told Newsmax, in April.

I asked Dershowitz if he had any contact with the Trump team. He said no. “No interest in any position,” he wrote in a brief email. “Happy to advise informally on Israel or civil liberties, as I have advised other presidents both Democratic and Republican.”

Regardless, it’s been an unpredictable year. As somebody close to the situation might call it: This one would be big league.