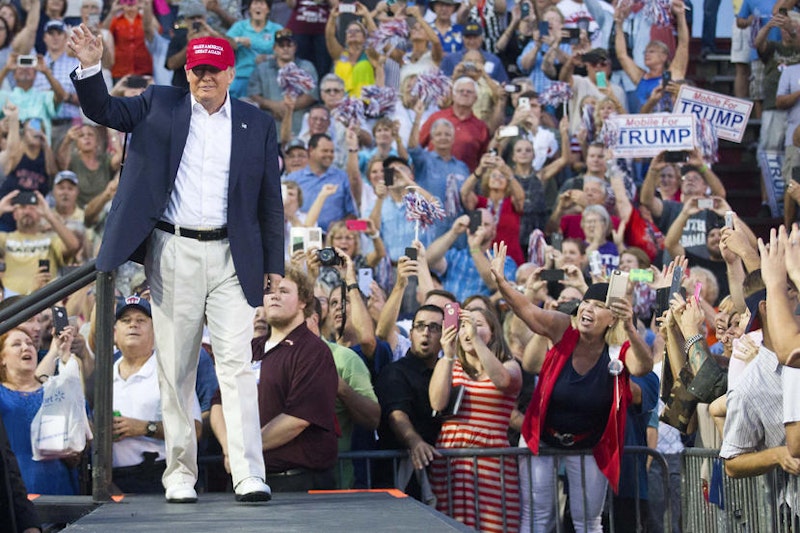 Michael Lerner wrote a post-election column in The New York Times, “Stop Shaming Trump Supporters,” in defense of people who the left, in their anger and delusion, have called a bunch of racists and sexists. He wrote that this group, which the Democratic Party abandoned long ago in favor of elites, is largely motivated by “inner pain and fear” rather than bigotry.

While Lerner’s approach offers a path forward and hope of winning the working class back into the Democratic fold, CBS News contributor and head political correspondent at Slate, Jamelle Bouie took a hard-line approach, expressing his unbridled contempt for 59 million deplorables in his November 15 column, “There’s No Such Thing as a Good Trump Voter.”

Bouie kicks off his rant by citing the Southern Poverty Law Center’s report that Trump supporters have harassed and intimidated more than 300 people since the election. He writes that millions of Americans are now afraid of how they’ll fare under the Trump administration, and stokes those fears by lumping all Trump voters in with the scum that felt the election gave them license to express their bigotry.

Bouie writes about “the Americans who backed Trump and his threat of state-sanctioned violence against Hispanic immigrants and Muslim Americans,” but provides no particulars on what sort violent threats he's alleging Trump made against these two groups. The writer has chosen to cope with his emotions by yielding to his worst instincts and simplistically playing the race card.

The Slate column offers no substantive analysis. It’s just another journalist venting his emotions. One more convenient excuse offered up to Democrats still reluctant to admit they backed a weak and uninspiring candidate and ended up with a nightmare. But lately, Bouie hasn't been getting much of anything right. On the October 12 episode of the Says Who podcast, he confidently declared that “for all intents and purposes this is over,” claiming that Trump had collapsed among every demographic he needed. Almost a full month ahead of Election Day, he said his prediction that Hillary Clinton would defeat Trump had already been “vindicated.”

Bouie certainly wasn't alone, but claiming “vindication” so prematurely suggests an extra degree of cluelessness. On the podcast, he speculated that the American political landscape might soon resemble Germany’s, where one major party spans from the center right to the center left, with the opposition party being “right-wing ultranationalists who are strong in the province's but unable to capture national power.”

Wrong again. The Democrats now prefer hobnobbing with the glitterati to “the provinces,” a weakness Trump recognized and capitalized on. Clinton spent too much time trying to convert GOP-leaning women in East coast suburbs, but those votes were always going to be “soft” ones that could dry up if the email issue flared again. While Clinton declared her candidacy was about “everyday Americans,” the way she campaigned said otherwise.

That was fine to a cultural elite like Jamelle Bouie. He knows little about the hinterlands, so he's chosen the lazy route of just writing rural Americans off as bad people, just like Hillary did with her foolish, and damaging, “deplorables” comment.

There are many reasons why people who aren't bigots voted for Trump, including anger over PC scolds. Many of Clinton's “deplorables” felt Trump was the candidate who understood them and would work harder to improve their standard of living. Those who aren't contributors to CBS News must often make hard, money-based decisions in the voting booth and hope their chosen candidate acts more temperately on certain issues once in office. Clinton's foreign policy stances have often made her look like a neocon, but nobody’s calling her supporters warmongers.

“If you have black friends you voted to oppress them,” Bouie, who’s black, writes, not specifying what Trump has done to indicate such alarmism. It's doubtful he saw any irony in declaring that Trump “condemned Muslim Americans with the collective guilt of anyone who would commit terror,” when collective guilt is exactly what he's imposing on every single Trump voter.

Bouie is peddling narcissism masked as righteousness. He focuses on attacking demagoguery, even though the column itself is a pure exercise in fact-free demagoguery. It's time for out-of-touch people like him who felt vindicated in October to listen. Their way resulted in spectacular failure. The Democratic Party now needs smarter voices that offer concrete plans to win back the working class, not people who will further alienate them.