The Democrats shouldn’t have tolerance for sexual harassment. 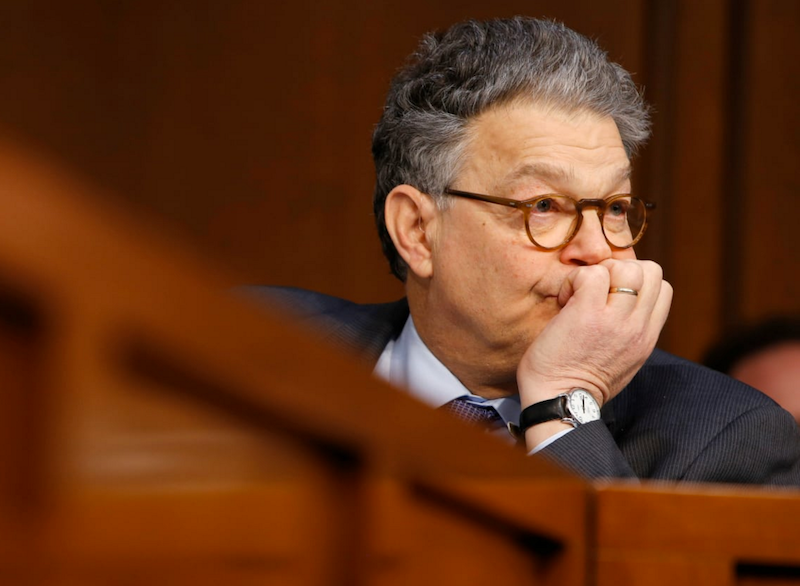 I’d been low-key hoping that Minnesota's Sen. Al Franken would run for president in 2020. He's a hard-working, intelligent, and effective legislator. He got Jeff Sessions to perjure himself, and his relentless and informed questioning of Trump officials is always a highlight of Senate hearings. His recent book, Al Franken: Giant of the Senate, is one of the all-time great political memoirs—a genuine page-turner, which explains the inner workings of campaigning and governing with honesty and wit. As a candidate, he’d be fun to watch in debates, and he'd raise the intellectual level of the campaign even if he didn't win. At the very least, I hoped he'd be in the Senate for years to come, and perhaps move into leadership.

Now I just want him to resign.

Franken’s been accused of two incidents (so far) of sexual harassment. The first involved a USO tour in Afghanistan in 2006, in which Franken performed with former model Leeann Tweeden, currently a radio host. Most of the commentary on the incident has focused on a picture in which Franken appears to be grabbing a sleeping Tweeden's breasts. There's been a lot of back and forth as to whether the picture was a staged joke. The real issue, though, is that Tweeden reports that Franken harassed her throughout the tour, writing a part where she had to kiss him, and then insisting they practice it. This week, another woman came forward to say that Franken groped her during a photo op.

Franken’s apologized in an admirably straightforward manner, and he's welcomed a Senate ethics probe. The contrast with Alabama senate candidate Roy Moore, who is facing much more serious allegations of rape and statutory rape, is stark. Moore has tried to discredit and destroy his accusers. Franken has not.

But even though Franken has handled the accusations about as well as possible, and even though he is a valuable senator, he still needs to go.

As Franken himself has said on numerous occasions, Democrats are trying, or should be trying, to be a party that works to improve the lives of ordinary people. Sexual harassment is a ubiquitous, serious blight on the lives of women, as individuals and as a group. Sexual harassment is demeaning and traumatizing. It prevents women from advancing in many professions. It's a barrier for women who want to enter certain male-dominated fields—like the media, comedy, or politics.

I've seen some liberals arguing that Franken is too important to lose. Others have railed against the hypocrisy of right-wing Franken detractors, who’ve called for the Senator's ouster while dismissing the much more numerous and serious allegations against Donald Trump and Moore. If Franken resigns, Republicans will be empowered to restrict abortion rights and hurt women, Franken supporters argue. His resignation won't even given the left a rhetorical advantage in calling out right-wing abusers. Republicans will just point to the resignations as signs of corruption, while continuing to back Trump.

All of this misses the point. Democrats are responsible for their own party, not the GOP. If Republicans decide to make their party one in which women are abused with impunity, that’s horrible, but Democrats shouldn’t follow suit. If that means that John Conyers, and others like him, have to step down, so be it. Sexual harassment is itself a major barrier to women's equality and well-being; rejecting it is a vital part of working for women's rights. At the moment, the most important thing Franken can do to show Democratic commitment to women is a letter of resignation.

Again, Franken is a good, hard-working, intelligent senator. But it's not that hard to find good, hard-working people to fill important roles—especially if you create an environment in which women, as well as men, are able to compete for those positions. There are lots of women in Minnesota without a history of sexual harassment who could fill Franken's seat admirably. Franken should resign, and Minnesota Governor Mark Dayton should appoint one of them.