You can’t be called on or corrected about the things you never express. 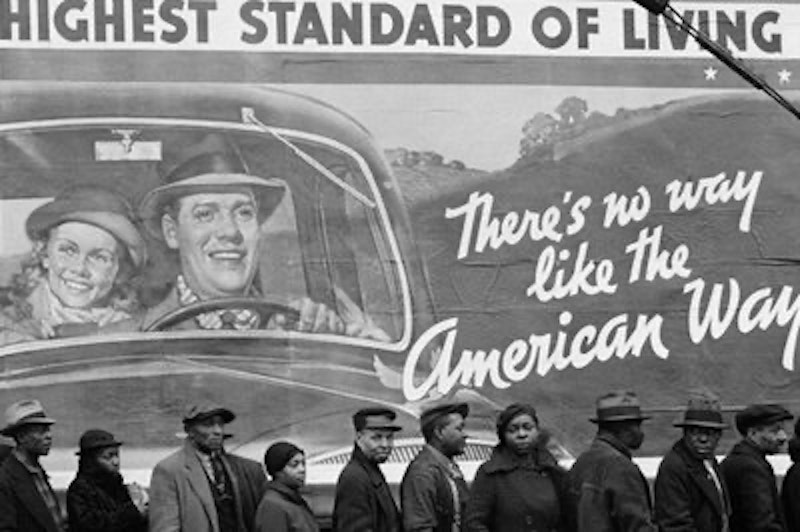 Perhaps you don't remember the 1990s heyday of the academic discipline known as “whiteness studies” or “white identity studies.” It sounds vaguely ridiculous or dangerous, for a variety of reasons; people like Richard Spencer, for example, are currently focused on whiteness as an identity. Women's studies and African-American studies were celebrations of the people being described, intended in part as enhancements of pride. If you're studying white people in order to enhance our pride, you're engaged in a reprehensible activity. Whiteness studies took itself to be anti-racist, but then again white people often take ourselves to be anti-racists and we're often wrong about that.

The scholars and polemicists who pursued the field 20 years ago contended with the widespread sense that while being black or Latino are definite identities with some specific content, “whiteness” didn't seem to have any particular features, being kind of the blank center against which “ethnic” identities are defined by contrast. The task of the discipline was to show that whiteness did have some very specific content after all, and the task was to make the content of whiteness apparent and to try to contribute to dismantling it or showing it to be some sort of delusion.

People like Noel Ignatiev (Race Traitor), David Roediger (The Wages of Whiteness), Ruth Frankenberg (White Women, Race Matters: The Construction of Whiteness), and William “Upski” Wimsatt (Bomb the Suburbs) worked on the project from various angles, often generating what still seem to me fundamental insights. But though you’ll still hear the occasional call to white self-reflection, the field’s become unfashionable, and hasn’t developed as its early practitioners might’ve hoped. I think this is unfortunate.

It's true, though, that the whole idea was highly problematic. Like white people talking about race in general, it was beset by pitfalls and pratfalls. It could more or less unconsciously or unintentionally express a white savior complex, for example, or it could get swept into a kind of white narcissism, where history and race were all about us.

My contribution to the field (published in 1998) was titled Act Like You Know: African-American Autobiography and White Identity. The title itself showed various problems. “Act like you know” was a phrase I appropriated from hip-hop (I got it off an MC Lyte record). I was a white man interpreting the self-accounts of people like Frederick Douglass, W.E.B. Dubois, Zora Neale Hurston, and Malcolm X. Indeed, I was reading their books as if they were about or for white people. Like I say, more pitfall than road.

But sometimes you need to get somewhere no matter the condition of the route. I still think whiteness studies or, more widely, withering white self-reflection, is required to get anywhere with race, and race is raging now, again, or always. What I'd suggest for white people is that we begin by examining ourselves. I don't think attempts to ameliorate racism that fail to do that are successful, or I think they have proven to be just more racism. For example, believe it or not, white people have done things like tear down black neighborhoods and move people into high-rise racial reservations, and taken their own purposes to be healing racism in this country. One central aspect of white identity, as I argued in my book, was that it essentially consists in an elaborate structure of self-delusion.

We owe various concepts to that period and its dialogue. One of them is the idea of white privilege, which can seem amorphous or just a way to blame all white people for racial oppression whether they have any concrete participation or racist attitudes or not. But the concept is fundamental, and, like a lot of people working in the area, I tried to give it some specific history and content. The idea of white privilege tries to show that we are still embedded in the unfolding history of slavery and economic exploitation, or that white people in a variety of ways both practical and psychological are still racists even though we have by and large stopped using racial slurs or explicitly advocating segregation. One thing we were trying to explain was why, if no one was a segregationist, we still lived (and live) in a society that is segregated in many respects.

We wanted to talk about the ways that American society still consisted largely of a racial hierarchy, and how this emerged out of a history in which we were still participating, or from which we were still benefitting structurally. We thought reflecting on that wasn't their responsibility; it was ours. We thought if white privilege didn't become more conscious, it was unlikely to end.

Another fundamental concept deployed in the field and that has persisted after that initial wave is the idea that race is a “social construction” rather than a biological or genetic reality. Like “white privilege,” this can sound like an irritating pc buzzphrase, but it's a fundamental insight. Race is something invented rather than something discovered, and then we have to try to understand when and why it was invented, and what its invented content is.

In my book, I tried to explain the content of race as mind-body dualism, projected on a society-wide scale and having as its goal the enhancement of the self-esteem of white people. White people supposed ourselves to be minds and supposed black people to be bodies; we thought of ourselves as spirits and them as animals, us as civilized and them as savage; all of those distinctions amount to the same dualism. Hence the association by white people of black bodies with violence and sexuality, beautifully summarized, for example, in the murder of Emmett Till.

The astonishing thing about this construction is that while white people have associated black people with animals and savagery and violence, our picture of ourselves as minds has permitted a history of extreme physical cruelty, rape, and murder. White people are what we have imagined black people to be. And though we do not know ourselves at all, we have shown ourselves with clarity to them. Black people know white people better than we know ourselves; that is, they, rather than we, are the knowers. I argued that if we wanted a non-deluded picture of ourselves, we had to turn to people like Douglass, Malcolm, and Public Enemy.

Those projects of whiteness studies remain to be fully accomplished. But another reason we could use a second dose is because race is re-polarizing and re-essentializing at the moment. Many of us who were working in the field had in mind that if the racial identities were clarified, we'd see that they were incoherent and much more fluid and interdependent than people thought they were, and that they could eventually take a more liberatory form or even disappear altogether. But the currently fashionable idea of “cultural appropriation” wants to assign each person and each song or outfit to a single rigid identity. People like William Wimsatt emphasized cultural crossings, intersectional identities and even the “race treason” of a white person acting black.

Pitfalls and pratfalls. But we're not going to get anywhere if we aren't willing to make mistakes, even boldly. You can't be called on or corrected about the things you never express. Meanwhile, we're still trying to figure out what the hell race is.