All Hail the Authentic Al Franken

Al Franken: Giant of the Senate may be the greatest campaign biography of all time. 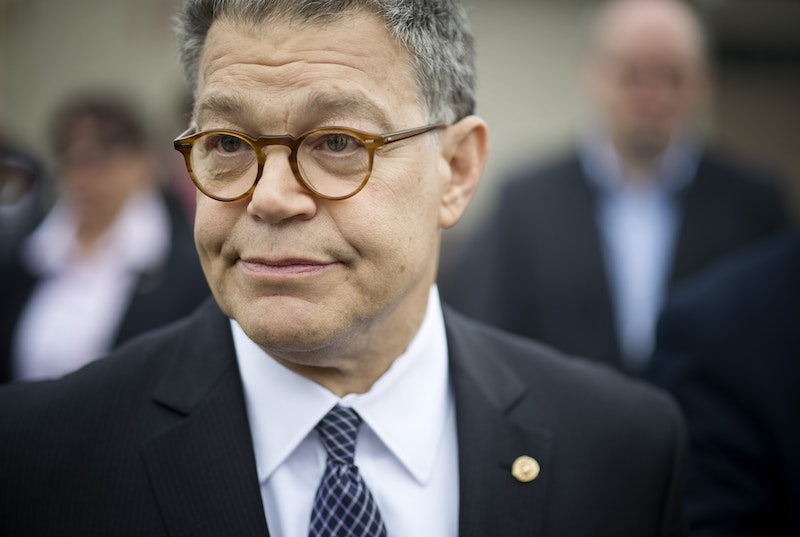 Al Franken's new autobiography, Al Franken: Giant of the Senate, isn’t that funny. Franken was a writer for Saturday Night Live and famously worked with comedians from Dan Aykroyd to Dana Carvey, but he was elected to the Senate from Minnesota in 2008, and the gravitas of the chamber has weighed on his humor. Franken's aware that he's been de-humorized; in fact, he writes about it explicitly in the book, and refers to his chief of staff as the Dehumorizer. In one of his early footnotes, he explains that he can't use words like "fuck" and "bullshit" because he's a Senator, and doing so would be out of line with his dignity, and also might get him in trouble with voters.

If that seems oddly honest… well, that's only because it’s oddly honest. Usually political biographies are steeped in authenticity claims; politicians assure you that Washington hasn't changed them one iota, and they were always righteously committed to focus-grouped talking points from the moment they stepped out of the womb while adjusting their ties. Bernie Sanders certainly doesn't write longingly about how the Senate prevents him from cursing in his recent campaign autobiography.

Franken, though, is a better writer than Sanders and/or a better writer than Sanders' ghostwriter. Rather than presenting himself as authentically committed to campaign boilerplate, he embraces an authenticity of lacking authenticity. His biography is remarkably frank about the trade-offs and machinations of the political process and Washington insiderdom. The result is both charming and informative—that almost unheard of political autobiography which is also a delightful page-turner.

Franken's book indicates that he's considering a presidential run, and some of the revelations—like the casual admission that he used cocaine while working on SNL—are meant to de-fang the inevitable opposition attacks. In other instances, though, Franken's honesty is gratuitous—the kind of thing you'd expect from a man who says that he has a visceral loathing of lies. Franken expresses great admiration for Obama, but also says, with matter-of-fact bitterness, that the Obama campaign refused to provide any support while Franken was locked in a brutally close race for Senate in 2008.

Franken's also remarkably straightforward about how the Senate works. The best ideas, he says, all come from Senate staff—though Franken's staff, trying to get Franken re-elected, get pissed at the Senator whenever he gives them credit. Franken also makes a strong, not necessarily popular case for collegiality. If you want to get a bill passed, he says, you generally need bipartisan sponsors, and it's vital to have good working relationships with colleagues whose ideas you despise. He talks about collaborating or joking with Mitch McConnell and Jeff Sessions—even as he, more predictably, recalls pressing Jeff Sessions so hard in his hearings for Attorney General that Sessions perjured himself. (Franken devotes a chapter to explaining why Ted Cruz is the most hated person in the Senate.)

Franken also takes an off-hand moment to kick a hole in the standard political rhetoric that says that all politicians are motivated mainly by a desire to serve the people. Franken does talk about his love for Minnesota, and how much pleasure he gets from helping people. But he also explains that his initial desire to run was sparked by his loathing of Norm Coleman, the Republican candidate who won the 2002 Minnesota Senate seat after Franken's mentor Paul Wellstone died in a plane crash. And Franken admits that a big part of wanting to be a Senator is that it gratifies the ego.

"Let me tell you a little secret about United States senators. We all love being United States senators. We all like having a staff of brilliant young people whose work we can take credit for. We all like having reporters ask us for our insightful takes on crucial issues. We all love being called 'Senator.'" He adds, "Most of us are doing this to make a difference in people's lives. Most of us are also really into the self-aggrandizing part of the job." It's hard to imagine Hillary Clinton or Bernie Sanders saying that.

Campaign biographies aren't just meant to sell copies; they're meant to boost the writer's political career. Will Giant of the Senate help make Franken a viable presidential contender? It's hard to say. He says in the book that his penchant for honesty and humor drives his staff to distraction, and has gotten him in political trouble in the past. It's easy to see Sanders, or some other progressive candidate, combing the book for talking points: Franken's friendships with Republicans, his defense of lobbyists, a couple of enthusiastic tributes to Hillary Clinton, or even his admission that he likes being called "Senator."

Authentic inauthenticity is a tricky move, and I’ve no idea whether it will pay political dividends. It makes for a great book, though—and Franken comes across as a dedicated, informed, and very intelligent guy. Win or lose, after reading his book, you get the sense that a Democratic primary with him in it would be more entertaining and substantive. And I'd cheerfully pay to watch him debate Donald Trump.