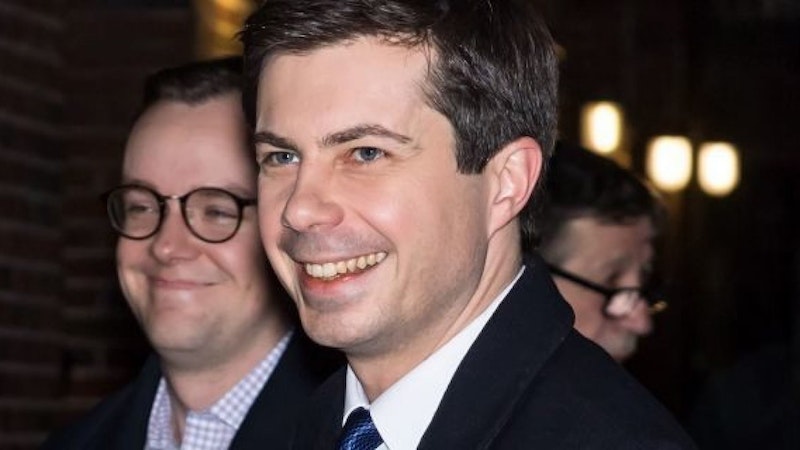 I don’t know who I’m voting for in 2020, but I’ve been keeping an eye on Pete Buttigieg. If elected, he'll not only be the youngest US president, but also the first openly gay one. LGBTQ news sites like NewNowNext, LGBTQ Nation, and the Advocate have been covering Buttigieg non-stop, and his campaign has worked hard to reach out to LGBTQ voters. Also, even though he’s a Christian, as a queer atheist I delight in seeing how Buttigieg has upset all the right-winged fundamentalists. Yet I wonder if LGBTQ voters pick him in the end.

Buttigieg has done a lot for queer representation in politics. “Following the presidency of Barack Obama,” Eugene Scott of the Washington Post writes, “many gay Americans contend the fight for LGBT rights has stalled and, in some cases, reversed.” The repeated attacks on LGBTQ rights since Obergerfell in 2015 prove that anti-LGBTQ bigotry is still alive and well: Masterpiece Cakeshop, faith-based adoption agencies turning away LGBTQ people, bathroom bills, the trans military ban, etc.

Buttigeig knows this. “You are certainly not free if a county clerk gets to tell you who you ought to marry based on their political beliefs,” he said during his official campaign announcement. “The chance to live a life of your choosing, in keeping with your values: That is freedom in its richest sense.”

Many see Buttigieg’s run for presidency as the LGBTQ community’s “Obama moment.” Like the former president, Buttigieg doesn’t center his identity in his message or shy away from it. “Being gay is not the major issue that drives people to him,” Des Moines business leader Rich Eychaner recently told BuzzFeed News. “The thing that drives people to him is he’s incredibly smart.” Buttigieg is unapologetically gay while also having a universal message, which is why he appeals to both LGBTQ people and cis straight people.

Some, however, feel Buttigieg downplays his sexuality. One example is Jeffry J. Iovannone of Th-Ink Queerly. “Our status as gender and sexual outsiders gives us a unique perspective on what it means to be ‘other’ and can instill in us a fierce sense of ethics, empathy, and justice,” he writes. Instead of downplaying his sexuality, Iovannone explains, Buttigieg should use it to explain how, because of marginalization, he can fight for justice for all Americans, not just the most privileged.

There’s a term we SJWs like to use called homonormativity, which is “the assumption that queer people want to be a part of the dominant, mainstream, heterosexual culture, and the way in which our society rewards those who do so, identifying them as most worthy and deserving of visibility and rights.” In other words, it’s when LGBT people (mostly the LGB ones) compromise themselves for cis straight people’s approval. “We’re just like you,” they say. “We want a house in the suburbs with a white picket fence and 2.5 kids. We’re not like those other icky queers who are sex workers, polyamorous, HIV-positive, or trans.” The result is a seat at the table for the LGBTQ people with the most privileges—white, cis, middle-class, able-bodied, etc.—while everyone else gets table scraps.

Buttigieg’s campaign runs the risk of upholding homonormativity if it’s not intersectional, especially when it comes to racial issues. In 2012, he demoted South Bend’s first black police chief Darryl Boykins after accusations came out that Boykins secretly recorded his white colleagues using racist language. Buttigieg fired Boykins, but nothing happened to the white officers. It also doesn’t help that Buttigieg said “all lives matter” in a speech three years later. He’s since apologized, and laid out his platform for racial justice a few weeks ago, which includes “homeownership, entrepreneurship, education, health, and justice.” Still, I wonder if he’ll be able to reach out to LGBTQ people of color, especially since most of his supporters so far are wealthy white people.

His comments about Chelsea Manning don’t help either. Last month Buttigieg told CBS Radio he doesn’t support Obama’s decision to commute her sentencing, saying that “the way for [military abuse information] to come out is through Congressional oversight, not through a breach of classified information.” Even the libertarians at Reason agree that this doesn’t look good for Buttigieg. He did speak out against the trans military ban, but considering the horrible conditions trans inmates face in prison, he’ll have to work extra hard to prove his support for trans people extends beyond just letting us serve in the military.

Buttigieg has tremendous potential to not only make America somewhat stable again, but also give the LGBTQ population more visibility. So far, however, he seems to be focused on the most privileged among the LGBTQ community: white, cis, and middle-class. I hope he’ll be able to address unique issues particular groups face as his campaign progresses.