A Plague On This House

Anti-immigrant sentiment is sabotaging America’s future. And it’s your fault. 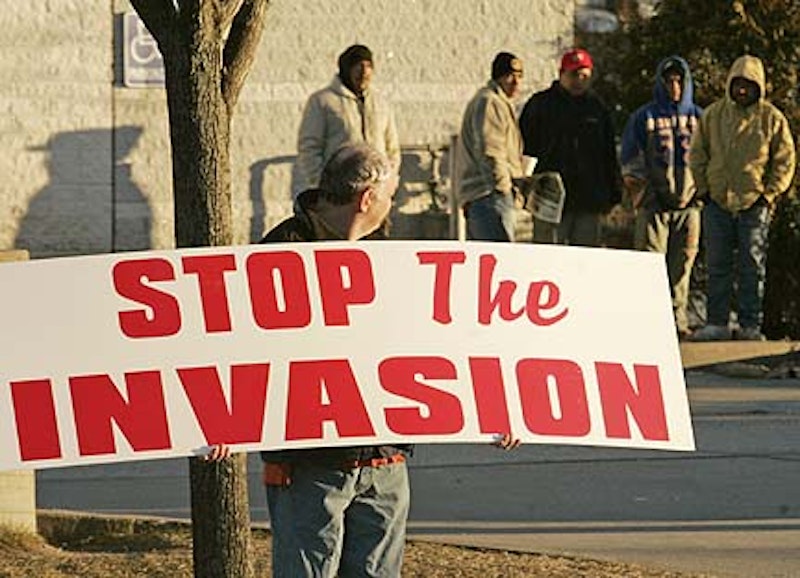 There are few pains quite as piercing as shattered naïveté, the pangs of being wronged coupled with the self-loathing regret that knows you brought it onto yourself. When it comes to immigration in this country, I know I’m naïve—I’ve said so before in this space. I believe that America is the best place in the world and the best place to be an immigrant. I recognize that this doesn’t mean it’s for everyone, but I take a fierce pride in our multi-colored, multi-heritage population.

But the events of the last few weeks have left me feeling out of touch. Protests in Tennessee and Staten Island have publicized the recent movements to ban the building of mosques around the country. This sickens me. Freedom of worship is a cornerstone of the Constitution and of our heritage. Residents of the central Tennessee town at the heart of the controversy have said that Islam is a political movement not a religion (a “terrorist organization” in the words of one local).

On the other side of the disdained immigrant coin, we have the creepy release of the Utah list publicizing personal details of illegal immigrants. We have Democratic governors expressing deep concern this week over the Obama administration’s suit against Arizona’s new law targeting illegal immigrants. This White House has been derided quite a bit for being indecisive and refusing to take a difficult stand (see: dithering over Afghanistan, inability to close Guantanamo, farming out health care to a partisan Congress, much-smaller-than-expected stimulus package, etc.). The announcement of the Arizona suit has been a breath of fresh air: a clear stand on a divisive and important issue.

Of course, polls show the nation supports Arizona, the Republican governors support Arizona, and the Democratic governors don’t even want to talk about it because immigration is “such a toxic subject,” according to Tennessee Gov. Phil Bredesen. Ignoring the issue, though, will allow the Arizona law to land on the books. Regardless of intent, this law serves to intimidate American-born citizens, as well as legal and illegal immigrants, of Latino descent. When “reasonable suspicion exists that the person is an alien who is unlawfully present” (codeword for “Mexican”) that person must present documentation proving they are an American citizen. I’m white, but if I lived in Arizona, I’d be worried that a deep suntan would get me pulled over based on that vague language (you can read the whole fuzzy thing here).

Over the past decade, the immigration debate in the U.S. government has been shaped largely by two concerns: security and the economy. The reduction of student and work visas, the increased blockage of both our borders—these were done post-9/11 under the auspices of protecting the population. These policies over time have proved useless at best and harmful at worst, stifling our trade and businesses without any tangible security benefit. Economic populists like Lou Dobbs have supported such measures claiming that immigrants steal American jobs. I used to think that these points of view were merely anachronisms, borne of an era with little reliable information on the realities of immigration.

Studies over the past few years have reached a stirring consensus, though: immigration is good for the American economy. Immigrants are keeping our population growth up, staving off a Europe-like situation where economic growth has stalled and the working-age population struggles to support the retired. Additionally, highly-skilled immigrants—like software engineers—bring enormous value to American business. Books like Columbia University Prof. Amar Bhide’s The Venturesome Economy show that immigrants disproportionately start their own companies (thus adding to and not subtracting from American jobs, like for instance, Google co-founder Sergey Brin) and tend to fill immediate needs that are not available in the American talent pool, making American businesses more efficient.

There are a growing amount of studies showing that even unskilled immigration provides benefit to the entire economy. Economist David Card released a study in 2006 that countered previous reports that unskilled immigrants hurt the wages of native-born high school dropouts (though the net effect on the entire economy has been near-universally deemed positive) and showed that immigrants actually increased the wages of dropouts, as well as brought new skills to the labor market, helping businesses run more effectively. A study, cited in this LA Times article, shows that unskilled immigrants and native-born people cluster in completely different occupations, a product of different skills and experiences.

Foolishly, I thought reality mattered in this debate. As our economy has soured, the calls for protection have ratcheted up with bans on hiring foreigners at TARP banks and a ban on being Mexican in Arizona. I guess this is where I am supposed to patronize you and tell you that I know immigration is a complicated issue, and I know our system is broken. But fuck that. Yes, illegal immigration is unfair. It is unfair to the thousands and thousands of people who get turned away from legitimate work visas. It is unfair to the illegal immigrants subjected to awful working conditions without government protection. It is unfair to the states missing out on tax revenue. But it’s our fault. People talk as if they have had no hand in where we are today, as if the problem manifested itself. If we simply let in the people who want to come in, we fix the problems. Our inability to fix it is on us.

The other day, my language instructor—who is of Indian descent—told me what it was like to move to Washington, D.C. from her small, affluent, all-white Long Island town. After 9/11, she said everyone at school would call her and her family terrorists. “I never realized there were people who liked foreigners until I came here,” she said of Washington. It occurs to me what a bubble I’ve lived in. My friends and I don’t even talk about immigration because we all think the same thing. My girlfriend is the daughter of very successful immigrants. I love meeting people from other countries—the stories they bring, the different cultures. I root for them. Why would we want them to feel disenfranchised? We want them here. Their success becomes our success. I thought this was common sense.

But common sense doesn’t exist in this conversation. Instead, over 50 percent of New Yorkers, in the city that prides itself most on its cosmopolitan worldliness and melting pot identity, disapprove of a mosque being built near Ground Zero. Extremist anti-immigrant groups have more than doubled in number over the past two years. We are a big nation, one that is judged by the entirety of its actions. A handful of immigrant-friendly communities and social groups around the country cannot undo the crippling nature of the truth: security and economics seem to be only excuses used to keep out people we just don’t like. We are all guilty by association. We are supposed to be the freest, most welcoming nation on earth, and we are turning our back on that legacy. We are fighting a war against ourselves, and we are losing.