A Jackpot of More than 100 Degrees

It's humid and hotter than a rooftop in the Northeast. It's the most wonderful time of the year. 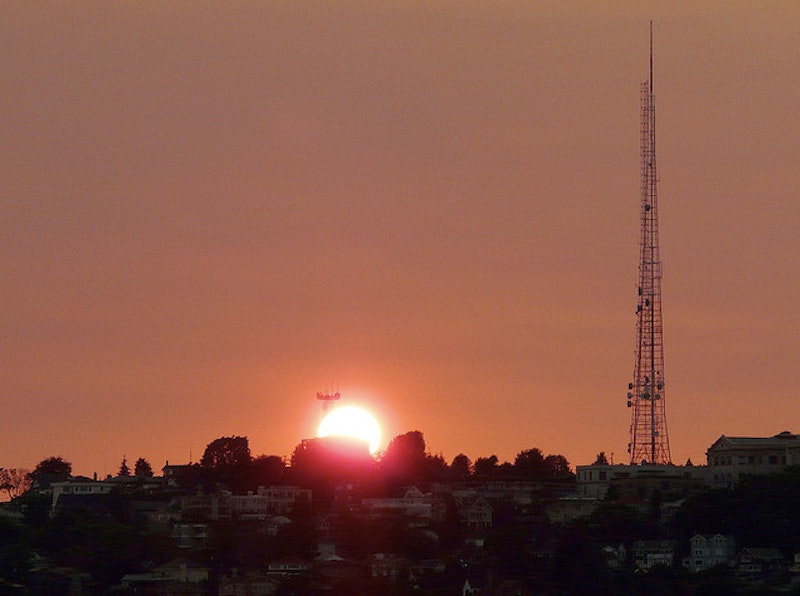 Last week, when a heat wave immobilized the East Coast, causing an atmosphere that’s referred here in Baltimore as “soup,” I didn’t even blink. Yes, it was extremely hot, and that tends to happen in this part of the country every single summer: complaining about it won’t lower the temperature by 30 degrees. That’s one reason I never read or listen to weather stories, except when an impending hurricane or blizzard is on the radar, since they don’t change from year to year. For example, a July 6 New York Times story could’ve been written a generation ago, as the lead sentence demonstrates: “A record-breaking heat wave tightened its grip on New York City on Tuesday, as triple-digit temperatures tested Consolidated Edison’s power supply, threatened the health of the elderly, and tried the patience and resilience of anyone who dared to venture outside.”

There were the usual man-on-street interviews, and, astonishingly, the unanimous consensus was that indeed it was hot outside. Aside from an anecdote gathered by reporters Patrick McGeehan and Fernanda Santos, in which a waiter from Astoria let Times readers know his PlayStation and computer shut off, the same exact piece was written, I swear, back in1966, although I doubt anyone named Santos worked at the Times at that time.

Perhaps this is insensitive carping on my part, because when extraordinary weather occurs a lot of people are shaken, miserable or even croak, and that’s hardly jolly, but I happen to like the heat. A lot. And while I won’t touch the global warming/climate change brouhaha—it’s a no-win debate, which I don’t have time for, since who isn’t for the continuation of the human species—during the summer months I have the opportunity to get all feel-good Green and complain about the waste of energy expended on round-the-clock air conditioning, even when it’s a relatively mild 80 degrees. You might think that some socially active environmentalists would pipe up about movie theaters and malls and office buildings and trains and planes that are so cold that the employees have to wear sweaters, but no, that’s not cricket.

On that topic, when I was a kid growing up on Long Island, where it was also hot every summer, crickets chirped in our garage every night, giving my mother fits. Paraphrasing the words Bessie Smith mournfully sang early in the 20th century, mom could squeeze a coin until Thomas Jefferson or FDR came to life, but she opened the purse for the capture (and snuffing out) of crickets, putting a nickel bounty on each one of the critters caught. I felt bad as part of this posse, but a nickel was nickel, and it kept me in Good Humor ice cream bars.

As a youngster I wasn’t too crazy about sweltering days, although the shady woods behind the 14-house development where we lived provided lots of cool (in both meanings of the word) diversions, like climbing enormous trees, jumping in foxholes, catching turtles and fooling around with friends in a decrepit bunker that was, in neighborhood lore, a storage unit during World War One. (It was also an ideal spot to smoke pilfered Lucky Strikes, and cough up both lungs.) My weather epiphany didn’t come until my mid-20s when one July day, the thermometer hitting 102 in Baltimore, and clad simply in my drawers in an apartment with no a.c., I had a Zen moment and decided to just accept the heat. Cold turkey.

Two years later, I traveled to Bangkok and Manila, where the heat is unforgiving, an immutable (and unremarkable) way of life, and was perfectly comfortable in a linen suit. This didn’t always work out: upon leaving the Philippines and flying to Berlin, I arrived in that snowy city at seven in the morning, clad just in the flimsy suit, and the Nurse Ratched at the Hotel Kempinski was downright hostile, telling me to roam the streets until check-in time many hours later. And when I lived in Manhattan, while others schvitzed and whined, I was perfectly happy on the humid days of summer, although the stink of steaming piss on the sidewalks was unpleasant, as were the dead rats outside restaurant dumpsters.

One day, at the New York Press headquarters in the Puck Building, a friend from Denver was in town and her boyfriend, after hanging out for an hour or so, windows closed and a.c. blocked off in my office, asked Patty, remarking on my dress shirt with sleeves not rolled up, “Is Russ a junkie, hiding his arms?” She laughed and allowed it was just a weirdo tic of mine; frankly, I wasn’t quite as amused as it reminded me of two employees who really were on the spike, one of whom was a close friend who succumbed to the addiction a few years later, dead at 41.

Anyway, East Coast residents have it pretty easy as far as natural disasters go: no tornados to speak of, no raging wildfires, mudslides, or, with the exception of Florida and on occasion the Carolinas, rarely a life-altering hurricane. It’s beyond my imagination how people can live in states like Minnesota or Wisconsin, where winter seems to stretch from October to May, and a skein of 100 degree-plus days, or weeks, is as rare as a healthy and edible blue crab from the Chesapeake.

My wife, who grew up in Los Angeles, has the exact opposite weather temperament from me: she likes frosty days and wilts in the heat. Fortunately, we’ve reached a quite suitable compromise, and so in the winter she tolerates my fiddling with the household heat, and on summer days I bite the bullet and accept a relatively modest blast of air conditioning. That means I sleep with two heavy blankets, but hey, you can’t put a price on household peace.