Killing Me Not So Softly

Despite lagging poll numbers, Democrats keep looking better every time a major Republicans figure opens his or her mouth. 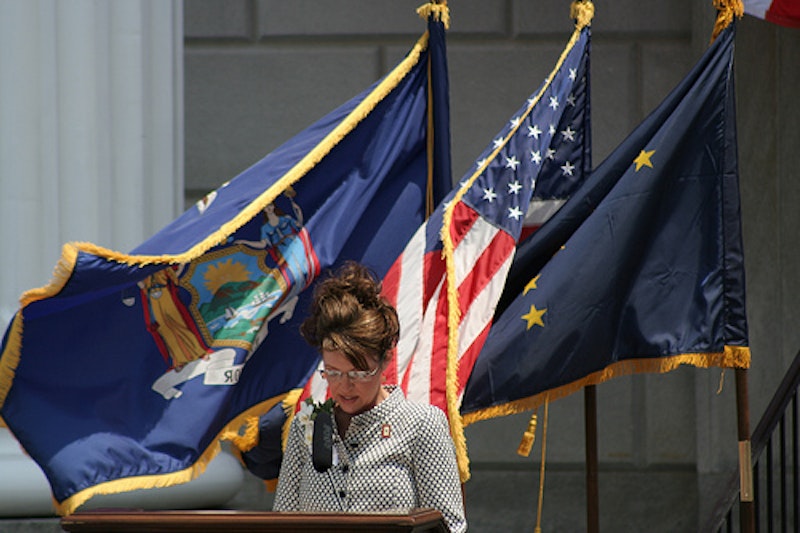 There’s a reason why the Republican Party is often called the “stupid party” and it’s not a measure of its collective IQ but a reflection of things its members say and do. The GOP is so giddy about picking up midterm election seats and maybe even control of Congress that they may be talking themselves right out of it. As for Democrats, just let the GOP keep on talking and talking—and talking.

Mort Sahl, the comedian and screenwriter, observed that, “Anyone who maintains a consistent political philosophy will eventually be tried for treason.” Republicans needn’t worry. Consider this: As most people are aware, Michael Steele, chairman of the Republican National Committee, said of the war in Afghanistan: “This was a war of Obama’s choosing. This is not something the United States has actively prosecuted or wanted to engage in.”

Steele’s a piece of work. Nearly everybody agrees. But enough’s enough for some Republicans, and a claque of party hierarchs on and off the record is calling for Steele to step down as GOP chairman. His effectiveness to lead in an election year is being questioned and contributions to the RNC have fallen off noticeably as the money gets detoured to other GOP committees.

So conservative bloggers immediately began circulating the name of the political diva of the right flank, Sarah Palin, as the logical successor to Steele. Please, God, go for it. But Steele has a contract and says “I ain’t going nowhere.” As for her part in the Republican comic opera, Palin is trying to convince the Tea Party movement to exempt the defense budget from their anti-government spending crusade.

“Something has to be done urgently to stop the out-of-control Obama-Reid-Pelosi spending machine, and no government agency should be immune from budget scrutiny,” The Washington Post quoted her as saying. “We must make sure, however, that we do nothing to undermine the effectiveness of our military. If we lose wars, if we lose the ability to deter adversaries, if we lose the ability to provide security for ourselves and for our allies, we risk losing all that makes America great. That is a price we cannot afford to pay.”

Palin’s latest reach-across-the-party is a video called “awakening moms” in which she pushes the GOP further to the right by linking the Tea Party movement to conservative social values and motherhood.

Want more? Sharron Angle is the Republican nominee for the U.S. Senate in Nevada, and Sen. Harry Reid, the Senate majority leader she’s challenging, says thank you very much. Angle has been endorsed by the Tea Party Express, the Club for Growth, Joe the Plumber, Phyllis Schafly and Palin. Here’s why: Angle supports U.S. withdrawal from the United Nations because it’s “a bastion of liberal ideology”; Angle supports banning abortion completely, even in cases of rape and incest; she supports a federal amendment to ban same-sex marriage; Angle wants to phase out Medicare and Social Security; she opposes water fluoridation; she wants to eliminate the IRS tax code; and she supports armed civilian militias. And Angle also supports the cut-off of unemployment benefits as a way of forcing unemployed workers to get jobs. To repeat, Harry Reid thanks God every night.

In Florida, the Tea Party rivals are trying to out-Tea Party each other with litmus tests over whose credentials are the purest. There are 20 Tea Party candidates for House and Senate seats, and Republicans who’re trying to control the Tea Party movement are claiming that Democrats have infiltrated the movement. Democrats say only, Huh?

And finally, although it’s possible to go on and on, there’s Rep. John A. Boehner, the House minority leader with the permanent day-glow complexion. He’s visibly salivating over the prospect of succeeding Nancy Pelosi as speaker. Here’s an example of how not to do it. Boehner described the financial regulatory reform bill as comparable to “killing an ant with a nuclear weapon.”

Believe it or not, all of the above speak for and about the Republican Party. But in the interest of brevity and limited attention spans, let us not waste the time to parse the thoughts of other GOP buzzbombs such as Gov. Bobby Jindal of Louisiana; Sen. Jim DeMint of North Carolina; Sen. Tom Colburn of Oklahoma; Rep. Darrell Issa of California; or Former Rep. Tom Tancredo of Arizona, not to mention Orley Taitz and the Birthers.

Republicans tend to eat their young. They’ve created an election year monster that they are now unable to tame and in the end it may cost them what conventional wisdom as well as history say should be rightfully theirs: Every out-party, with one or two exceptions, gains seats in non-presidential election years.

But the GOP has allowed the Tea Party movement, which it initially encouraged, to take on a life of its own at the extreme margin the party. And the GOP establishment has even lost the loyalty of its 2008 vice presidential candidate who has developed a national constituency of her own outside the party in much the same way Spiro T. Agnew did when Richard M. Nixon considered dumping him in 1972. Palin has thrust herself into the forefront to become the most visible spokesperson for the right wing of the Republican party. And there’s now the realization that the Tea Party movement is really a sham: They were Republicans by another name all along, a fringe collection of wing-nuts and free-lance loonies.

What is even more remarkable is the lack of discipline within the party’s official ranks. The evidence mounts almost daily that the GOP is composed more of uncontrolled blowhards than a party with a policy that speaks with a single voice. The RNC’s Steele speaks independently and has often been accused to trying to set policy without consulting Congressional leaders. The Republican Party is imploding. One reason is that there are really three Republican parties—the national party, the Congressional party and the Palin party. And they rarely intersect. The party, if there any longer is such a thing, has a single goal, and that is an attempt to make the November elections a referendum on Obama. Even with the country in sorry shape, a party without a policy or a plan other than embarrassing the president has little chance of convincing the voters that’s reason enough to win.

But with Obama sinking in the polls and perhaps lacking vote-pulling power in the November elections, the best the Democrats can hope for is that the Republicans keep on doing what they’re doing.