A Political Pesonality, Split by I-95 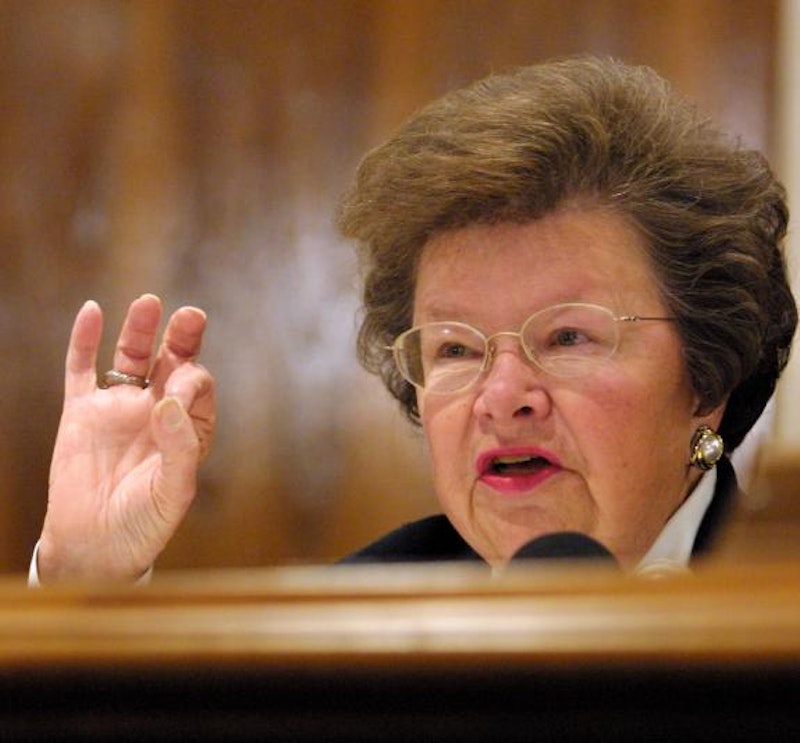 An analysis of Sen. Barbara Mikulski’s dual personality politics is like a visit to a decent psychiatrist: Nothing very much happens but it sure makes you feel good.

She’s the senior-most woman in the Senate but she’s never held a major committee chairmanship. Milkuski’s been a senator for 24 years, yet she’s sponsored or co-sponsored only a dozen bills and had only one enacted. But she remains the most durable and popular political figure in Maryland. And she has no challenger for the Democratic nomination to a sixth term, high tribute in a volatile election year when anger against incumbents has reached an ear-plugging pitch.

A collection of recent polls gives her fail-safe leads of between 25-30 points ahead of her closest Republican challenger, Queen Anne’s County Commissioner Eric Wargotz and several other no-name GOP competitors. Her favorability ratings are high, her negatives are low, and there are very few undecided voters when it comes to Mikulski. And to sweeten the appeal, she has $3 million in the bank after already spending $2 million prepping for the active phase of her campaign, according to published reports.

Six years ago, in her last campaign for the Senate, Mikulski dispatched Republican State Sen. E. J. Pipkin, of the Eastern Shore, by a resounding vote of more than two-one. And she’s had a pretty easy time of it since her first run for the Senate in 1986, when her GOP opponent, Linda Chavez, a Democrat reborn as a neo-conservative Republican, characterized her as a “San Francisco style liberal.” That was her toughest race but she nonetheless won by more than a quarter of a million votes. Others she decapitated along the way were Dr. Ross Pierpont (twice) and Alan Keyes, a frequent candidate for various offices, including president.

So what’s the magic formula? For Mikulski, it’s as simple as it is complex: Be an inside player in Washington and the parochial school daughter of Highlandtown grocers in Baltimore. And that takes some doing, almost a complete personality make-over every time she crosses the Maryland border to or from the District of Columbia. She’s an elitist at one end of I-95 and a populist at the other. And very few voters are the wiser.

Simply put, she’s seen as a “fighter” and as “feisty” by most Marylanders and voters seem content not to look beyond her sparkplug personality for anything more profound. It’s really nothing more complicated than that.

On Saturdays, for example, Mikulski likes to cruise a different Baltimore area supermarket every weekend, kind of an everywoman out meeting constituents and complaining about the high price of foodstuff just like every other shopper. But come Monday, she’s back in Washington cutting deals for earmarks in this bill or that or making certain to slip in an amendment that will provide for Maryland in one way or another.

And that’s the trick in the netherland of legislating. Her name may not appear on many pieces of legislation, but Mikulski has been very effective at bringing home the pork chop for Maryland through earmarks, amendments and vote trades. As an example, in the massive Obama health care bill, Mikulski was able to slip in an amendment making certain that every woman has access to mammogram coverage. As is often remarked about Congress, it’s possible to get a lot done if you don’t care who gets the credit. She’s cast some controversial votes, too. She caved to the anti-Section 8 crowd on “Move to Opportunity” and she went along with the Bush Administration on FISA, the Foreign Intelligence Surveillance Act.

In the dance of legislation, it’s not how many times a name appears on bills but how a legislator is able to influence the final version of the bills that pass. The key to Mikulski’s cachet in the Senate is the number of subcommittees that she chairs, especially those on appropriations and health. One delivers money, the other gives her leverage on her favored subject, women’s issues.

What’s more, Mikulski has a keen sense of place. She resonates with purely local issues instead the big-picture matters that produce words but not votes. She fought for a new firehouse for Dundalk and she made a personal cause out of winning financial help for the children of the woman firefighter who was killed during a practice drill in a blazing Baltimore abandoned house.

And when she was recovering from a nasty broken ankle and was preparing to announce her candidacy for re-election, she didn’t give a lofty speech. She said: “I’m ready to kick butt.”

There’s a dark side to Mikulski as well. She has a reputation on Capitol Hill as being very difficult to get along and work with. She is not pleasant or easy to work for and goes through staffers like dispensable chattel. And, nearly annually, The Washingtonian magazine ranks her as the meanest legislator on Capitol Hill and the one most difficult to work for.

So Mikulski plays to both the Baltimore and Washington media markets, each of which encompasses a huge bloc of Democratic voters in the city and the Maryland suburbs around Washington. When on Capitol Hill, she pitches to the Washington market, and back home in Baltimore she works the local talk radio circuit.

A social worker by training, Mikulski launched her career in politics by challenging the very establishment of which she is now a member. She first won attention by helping to block the proposed East-West Expressway which would have torn up and rumbled through her Fells Point neighborhood. Next, on the momentum of that success, Mikulski decided to run for City Council from the old East Baltimore First District but was told to wait her turn. She ignored the admonition and ran against the dominant political machine in 1971 and won. She was the break-through candidate who began the systematic dismantling of Baltimore’s sclerotic political organization. In 1976, after one term, she reprised her electoral success. She defeated the incumbent congressman, Rep. Edward Garmatz, and served in the House of Representatives until 1987 when she became a senator. The only electoral race Milkulski ever lost was in 1974 to incumbent Republican Sen. Charles McC. Mathias Jr.

The secret to the Mikulski paradox: There are really two Barbara Mikulskis—the one who works in Washington and the other who lives in Baltimore. And neither pretends to know the other.