The security at the Canadian border is hurting our economy for no good reason. 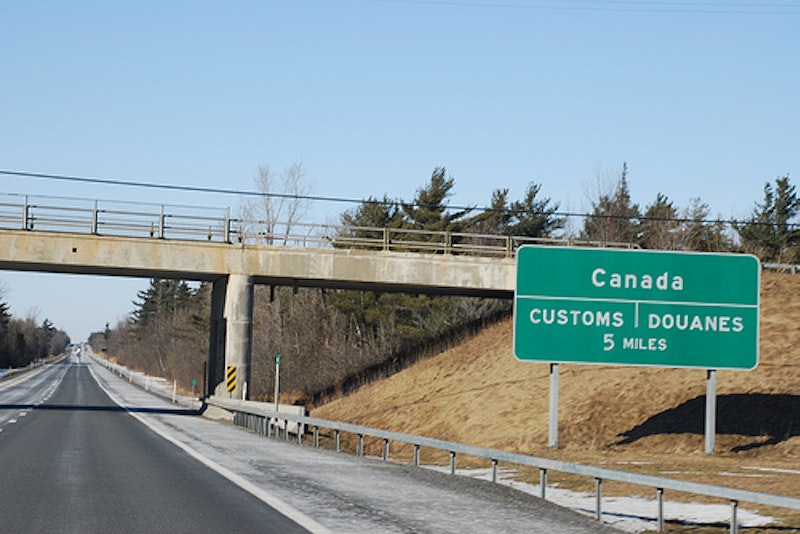 My brothers have never had Schwartz's smoked meat. Similar to pastrami, though a little less peppery and somehow meatier, Schwartz's smoked meat is a Montreal greasy spoon delicacy. And last week, my brothers should have been able to try it. We were set for a family reunion at our great aunt and uncle's home in Vermont, followed by a jaunt to Montreal a few hours away.

Unfortunately, my family is not from a border state like Michigan, where I live, and had no idea they would need passports to re-enter the United States according to the law that went into effect earlier this summer. When I called to remind them to bring their passports a few weeks before the trip, we discovered my brother's passport had expired two months ago, and my aunt's passport hadn't been renewed in 20 years. They tried to rush order passports, but the processing hadn't come through. Of course, once we got to Vermont, my parents realized that only my father had brought his passport, and the rest were tucked in a drawer somewhere. So, our big eight-person Montreal trip was halved, and while my trip there was certainly amazing, it wasn't the family reunion we were all hoping for.

The conversation about secure American borders usually centers on the emotionally charged border between the U.S. and Mexico. Since 9/11, though, advocating for universally tighter borders-specifically the U.S. and Canadian border-has become much more politically salient, dodging the implicit racial and class issues that emerge with Mexico. Advocates of tightening the U.S.-Canadian border, including Department of Homeland Security head Janet Napolitano, have an easy rallying point: one of the 9/11 hijackers entered the country through Canada. Which might be an interesting point if it weren't for the simple fact that it's flat-out wrong. Indeed, no hijacker came through Canada.

In the aftermath of 9/11, the United States has increasingly "thickened" its northern border, bulking up on security requirements and personnel. The recent passport requirement has stirred a flurry of mention in the Canadian and world press focusing on the fears of Canadians and the negative effects of the increased security. For whatever reason, the reaction on this side of the border has been relatively quiet. The same people who berated George Bush for a narrow-minded unilateralist foreign policy seem either unaware or unwilling to criticize President Obama for carrying out a narrow-minded unilateralist foreign policy that directly and very pointedly affects alienates millions of our closest ally's citizens, as well as millions of our own citizens.

Buttressing security may seem simple, but it doesn't take into account the effects of the tightening border. On the ground, the new security policies have choked both American and Canadian output, creating a real decline in the nations' quality of life, economic strength, and business competitiveness. The Brookings Institution, a liberal American think tank, released this study, updated last month, tracking the statistical plummet of trade between the U.S. and Canada since the terrorist attacks in 2001. Brookings also released a paper written by scholar Christopher Sands, advocating a complete restructuring of U.S. and Canadian border management, weakening and decentralizing the security apparatus that is costing us millions.

Aside from the obvious tourist dollars, which should be flowing at top rates considering the relative strength of the Canadian dollar, people may not realize how much business actually occurs between these two nations, who form the largest bilateral trading partnership in world history. Canada consumes 20 percent of all U.S. exports, according to Sands, and the United States consumes 76 percent of Canada's exports, according to The Economist. This doesn't take into account the massive intertwined manufacturing and business systems that exist between the two nations. Each day, the auto industry alone generates $1.5 billion in goods flow between the two countries. Complex assembly lines that rely on perfectly-timed delivery routes are being slowed and in some cases even halted due to border delays.

Sands offers many clear-headed ways to address the issue, such as recognizing that all borders are not the same by giving states greater say in border control and working closer with Canada to reform the current security systems. These concrete plans and changes need to be enacted, but Sands and others don't really acknowledge the fundamental conflict playing itself out at the Canadian border: we must find a balance between security and productivity.

The amount of money and jobs lost, especially in the tanking auto industry, don't seem worth investing and wasting on a security system designed to monitor a border that, wait a second, no terrorist has ever gotten through. I've said this before about airport security and terror alerts: we could be using those resources on the intelligence and police departments that seem best suited to combat terrorism or for planning a reasoned response to an attack. Unmanned surveillance and digitalized information exchange won't hinder trade and could even help security. Our economic might is one of our primary means to influence the world, and we're sacrificing it. We need to get over the illusion of security because people are hurting in a real way, and the loss of jobs and money are much more damaging to many more people than anything a terrorist-and it remains to be seen if they could even get in-could do.