McChrystal Is Not the Issue

Why are we still so heavily engaged in Afghanistan? 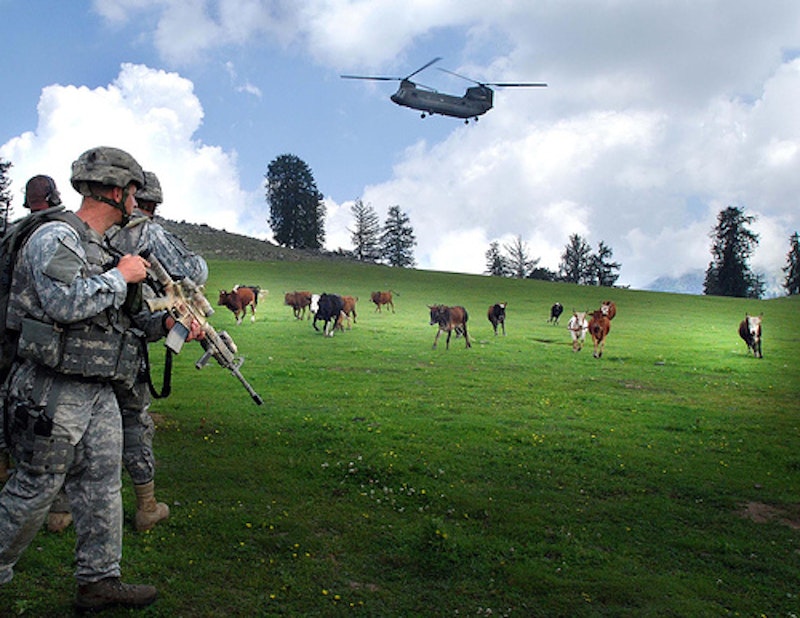 The flap over comments made by ousted General Stanley McChrystal in Rolling Stone and his replacement as commander of American forces in Afghanistan by General David Petraeus has left me shaking my head in befuddlement. Not that I don’t understand why the Commander-in-Chief fired McChrystal. President Obama is, after all, a politician; having the General in charge of enforcing military and political policies in the war-torn country make observations that are critical of the President and his regime is untenable. Supplanting McChrystal with a military commander who will implement Obama’s political objectives without question is, therefore, understandable. The real question is, why, after all this time, are we still fighting a war in Afghanistan?

Back in 2001, after the terrorist atrocities at the World Trade Center, the Pentagon, and a Pennsylvania field, and the concomitant loss of innocent lives, most Americans, including myself, supported President Bush in sending our troops into Afghanistan. Grieving as one nation, our collective consciousness cried out for vengeance on al Qaeda, the perpetrators of the heinous attacks. Deploying our American soldiers into Afghanistan to root out al Qaeda and its leader, Osama bin Laden, as they hid out among their Taliban allies, seemed the right and the just thing to do.

Now it is 2010, and our troops have been in Afghanistan for almost nine years, making the war there the longest in American history. The invasion’s main objective, capturing the al Qaeda leader, continues to elude US forces, for bin Laden is now believed to be either across the border in Pakistan, or dead. Sending American soldiers into Pakistan, a US ally and nuclear power, to verify bin Laden’s death or presence there is not likely to happen. Given the original objective no longer seems achievable, Obama’s deployment of an additional 30,000 troops into Afghanistan is hard to understand.

Maintaining the war in Afghanistan is unfeasible in light of what doing so has cost this country. Currently, there are 87,000 service men and women in Afghanistan, a number that will increase to 102,000 by next year. As of July 11, 2010, 1171 American men and women have died fighting this war. In addition to the loss of lives, keeping US soldiers deployed in Afghanistan has been financially costly to American taxpayers. For fiscal year 2010, the war will cost $105 billion, and is projected to cost $117 billion in 2011. To date, the total cost to our country of almost nine years of fighting in Afghanistan is over $300 billion. That is a huge amount to spend on a foreign war in this economic environment, when unemployment is high and people are losing their homes because they cannot pay their mortgages.

Obama, during a speech at West Point in 2009, gave his reasons for deploying the additional troops to Afghanistan despite pre-election campaign promises to withdraw the ones already there. According to the President, since al Qaeda continues to operate from “safe havens” in Afghanistan and Pakistan, the security of our country is at stake.  Escalating the war by committing additional forces will help to stabilize an Afghani government weakened by a resurgent Taliban. Fighting the Taliban, while rebuilding Afghanistan and its infrastructures, will insure that al Qaeda does not have safe havens there, preventing the “cancer” from spreading and keeping America secure.

What the President failed to mention in his West Point speech is that the actual number of al Qaeda operatives still remaining in Afghanistan is relatively small. Prior to 2001, there were 10,000-20,000 al Qaeda fighters in the region. Since then, however, al Qaeda’s popularity has declined with Arab nations, and its strategic jihad objective, of replacing existing regimes with Taliban-like led governments, has failed. Top al Qaeda leaders, including Mohammed Atef, a former leader of the terrorists’ network, and Khalid Sheikh Mohammed, the alleged mastermind of the 9/11 attacks, have been killed or captured, leaving the organization severely weakened. At best, current intelligence estimates, which Obama was aware of at the time of his speech, number the al-Qaeda members in the area as being no greater than 100. Yet, as the president stated, destroying al Qaeda remains our top priority in the war.

We have now come full circle, for what was true in 2001 holds true today, and our objective after nine years is to root out al Qaeda from among its Taliban allies. Admittedly, totally discounting the terrorist organization’s ability to foment violence and discord in target nations is not wise. However, expending billions of dollars and thousands of American lives in a foreign war, essentially an internal, civil one, to combat a weakened and demoralized secondary foe with seemingly little reach remaining also does not make sense. The President should remember his campaign promises and keep to his projected schedule of withdrawing troops from Afghanistan by 2011.