Let’s care about each other and live. 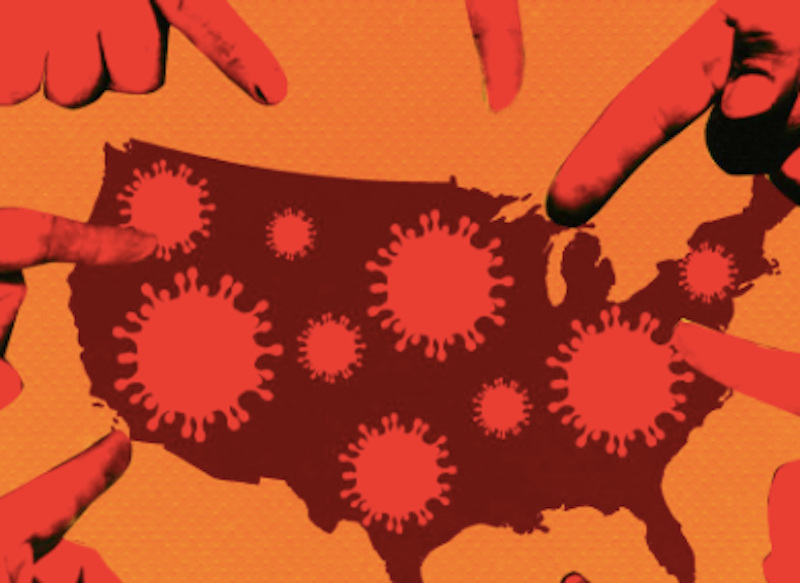 In “The anti-quarantine protestors aren’t Rosa Parks. They’re more like Typhoid Mary,” Max Boot compares devotion to individual freedoms, Trump’s Federalism-of-convenience, and obsessiveness with free markets to a viral cytokine storm, arguing that “The same ideologies… that have enabled America’s rise may bring us down if they are carried too far during a deadly pandemic.” In this sense, the recent lockdown protests are manifestations of a uniquely American, mostly libertarian value system, which is as short-sighted as it is lethal.

According to Boot, the protestors aren’t freedom fighters or social justice resistors. They’re anti-social agents of community spread—like “Typhoid” Mary Mallon, an asymptomatic carrier, who may have caused up to 50 deaths as an in-house cook in early-20th century New York. Boot thinks this is insane. He recalls the Prohibition-era adage, “My right to swing my fist ends where your nose begins,” and modifies it: “My right to work ends where your infection begins.” No “liberation” is possible from the necessary public health guidelines in a pandemic.

But Boot isn’t risking much by making this argument. Of course the nation and the entire world are at risk. Of course an economic system defined by commitment to “free markets and hostility to big government” results in under-equipped hospitals and people without health insurance. Of course the cant of radical individualism is ill-equipped to address these things and seems to overlook them completely.

My first tendency is to dismiss Boot’s piece as another empty op-ed or criticize him for focusing on the silly and the obvious. Stephen Moore’s characterization of the lockdown protestors as “modern-day Rosa Parks” is beneath consideration. It’s a throwaway comment so absurd that it qualifies as either audacious sarcasm or inadvertent trolling, depending on how much credit one wants to give him.

Still, sometimes it becomes necessary to state the obvious, especially when confronting alt-right agitators. Given the partisan divisions afflicting our national discourse before the pandemic, there’s no reason to assume readers will recognize the obvious, the absurd, and the silly, even when it’s standing on the corner shouting “LIBERATE MICHIGAN!” through a bullhorn.

As with the Tea Party before them, the lockdown protestors have been highly vocal and visible but, as Axios notes, “the recent protests in Michigan and elsewhere against stay-at-home orders—which have drawn national press coverage—don't reflect how the majority of Americans think about the response to the virus.”

Most Americans are being smart, listening to health officials, staying home, and practicing social distancing to the best of their knowledge and ability. This is admirable, especially when Trump’s apologists and mouthpieces have grown so heated. Unfortunately, this might be the most important reason to let Max Boot tell us what we already know.

Take, for example, Victor Davis Hanson’s “It’s a Free Country, Brother” in The National Review—currently one of the most polemical, most egregiously libertarian, anti-lockdown arguments. Hanson, who is a neoconservative military historian and not a scientist, has previously advanced unresearched theories on the origin of the disease and seems very in need of someone Max Boot to slowly and simply restate the obvious.

Hanson tries to reframe the pandemic as primarily a case of governmental overreach. He seems as eager to ride his war horse into battle at the head of a citizen militia as the dude waving the Confederate flag at the Brookfield, Wisconsin protest. We haven’t noticed that venerable racist symbol show up much since Charlottesville’s historic convergence of stupidity, racism, murder, and right-wing piss-fear.

Much like the alt-right extremist groups and conspiracy opportunists quietly facilitating the lockdown protests, who see an impending race war of Turner Diaries magnitude whenever there is any kind of demonstration, Hanson is nursing fantasies of militias and insurgencies: “a free and empowered people, even in times of mortal danger, long nursed on a Bill of Rights, is hard to subjugate or shut up, even after over a month spent locked up in their homes.” I know my Kentucky long rifle must be around here somewhere. Maybe the basement?

He’s relieved that “In these strange times, American individualism and the Bill of Rights that birthed it are still proving, for a while longer, too strong for the natural forces of fascism masquerading as ‘we had to destroy freedom to save it.’” But as Boot puts it in his deadpan op-ed:

No one is suggesting that we sacrifice our most cherished liberties. Indeed, our freedom of speech and our political checks and balances are critical advantages that prevent our government from simply covering up coronavirus deaths as Beijing tried to do. But some individual rights need to be scaled back in wartime—and we are now in the fight of our lives against a pandemic that has already killed more Americans in three months than died during the three years of the Korean War. It’s a question of where you draw the line.

In other words, if our freedoms stop at that line, if consideration and concern for each other is more important in a pandemic than libertarian individualism, if my personal rights end at the point where my community could be harmed by my behavior, then what is Trump and his extension, Hanson, actually saying?

The President calls for rebellion against state governmental health regulations, ostensibly because he’s balancing human lives against the unenviable position of being an incumbent in an election-year recession. He riles his supporters with inflammatory encouragement. And unqualified fantasist-apologists like Hanson amplify that by characterizing the pandemic solely in terms of the individual’s needs and wants without considering the fact that as of earlier this week, there have been 45,318 documented virus deaths in the United States, making “America first” at least in death.

It seems to me that if we end the lockdown clumsily and arbitrarily, without a lot of careful consideration and solid science informing our decision, our rights are being violated, particularly the right to live the rest of our lives ventilator-free.

A global pandemic changes everything. These changes are not and will not be easy or simple. But this is not a time for Civil War militia fantasies, denial, or realpolitik. Let’s care about each other and live. Let’s care for each other. And let’s reopen the country as soon as possible once we’re able to draw that line.