The No Politics of Quarantine

Bret Stephens says nationwide lockdowns are “playing by New York rules,” as if the virus itself is a cultural elite. 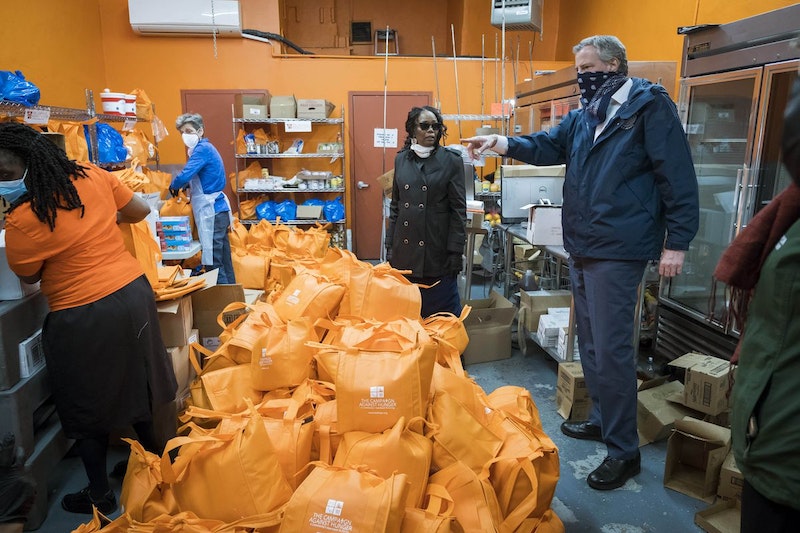 Reliably, Bret Stephens has laundered the most moronic coronavirus commentary into The New York Times. He was less silly at The Wall Street Journal, but ever since starting at the Times in April 2017, he’s been a total nut. Minced oaths on Bill Maher, emailing the dean and provost at George Washington University to complain about a tweet one of their faculty made referencing him, and just four months ago, promoting eugenics and race science in a column that contended that Ashkenazi Jews are intellectually superior by dint of genetics.

Executive Dean Baquet or then-publisher Arthur Sulzberger must’ve taken him aside three years ago, weeks after Donald Trump was inaugurated, and given him the business. Be provocative, be contrarian, be the conservative we miss, a harmless foil. Stephens’ interpretation of that advice sometimes yields interesting results—he plays the jester. Bari Weiss, a generation younger, understands how to deliver what Stephens never can convincingly: Gawker-lite provocation.

Stephens’ latest column is one of his dumbest, claiming that Democrats and #NeverTrumpers are going too far with nationwide lockdowns. Unfortunately, the sentiment isn’t that uncommon. “America Shouldn’t Have to Play by New York Rules.” What an astonishing headline (and Stephens is an unabashed #NeverTrumper). How stupid do you have to be to look at the public health catastrophe of COVID-19 and come to the conclusion that quarantine is just more nanny state coastal elitism? Does Stephens have the virus?

“New Yorkers think they’re the center of the universe” is one of the most hack angles a columnist can take. It is a cliché older than all of us, and while coastal elitism is obviously abundant, this isn’t the same. In another hell where Michael Bloomberg is President, he’s making Coca-Cola illegal and smoking cigarettes punishable by death—that’s “coastal elitism.” Taxing junk food and making fun of “white trash” as if it’s any different than making fun of Chinese or black people is coastal elitism. Perhaps I should cut Stephens and the rest of the syndicated hacks a break (like Mark Shields, who said on PBS the other day that, “[Trump] is not Will Rogers, he’s not Jerry Seinfeld, he’s not known for his sense of humor.” Are you kidding me? That’s the only thing Trump has going for him).

The Times published a much better piece on reopening the country yesterday by Shan Soe-Lin and Robert Hecht, arguing what's been obvious for over a month: "To suppress COVID-19, we need to test those with no symptoms." No significant area of the country can be reopened until there is sufficient testing for the entire population. Stephens mentions this, and throws his hands in the air, and continues on with the plan. There is no other plan. Mass testing is a necessity to return to work safely. The large amount of asymptomatic carriers makes this obvious. There isn't any other way around it pre-vaccine, unless you want to offer yourself as a "control group" like the cuckoo cuckoo Mayor of Las Vegas.

I completely understand the desire to reopen and "get back to normal," whatever that means at the moment. Normal wasn't that great. Things were not going well. Our President is a megalomaniacal moron, everyone hates each other, society is more stratified than ever, and for those who oppose the death cult of the GOP, we are flogged and gaslit by the DNC, who offers us a man that could not recite the alphabet if asked on a dime. Joe Biden has brain problems, this is obvious. He is being kept away from the public, when another candidate could be countering Trump's bizarre daily briefings (likely no more).

Quarantine sucks. I want it to disappear in the summer like Trump and dimestore psychics insist. I understand. But the situation is grim, and this is magical thinking. Stephens admits he isn’t a scientist, but goes on to speculate about mortality rates, case numbers, and death counts across the country compared to New York City. Stephens asks us to “Consider a thought experiment” about New York State being its own country, and how that separation would affect the rest of America’s coronavirus toll. Do you follow? He cites low deaths and caseloads across much of the country, and then leaps to this: “No wonder so much of America has dwindling sympathy with the idea of prolonging lockdown conditions much further. The curves are flattening; hospital systems haven’t come close to being overwhelmed; Americans have adapted to new etiquettes of social distancing.”

He goes on: “Right now, there’s a lot of commentary coming from talking heads (many of them in New York) about the danger of lifting lockdowns in places like Tennessee. Perhaps the commentary needs to move in the opposite direction. Tennesseans are within their rights to return to a semblance of normal life while demanding longer restrictions on New Yorkers.” Who knew people in Tennessee were immune from COVID-19?

He writes: "I write this from New York, so it’s an argument against my personal interest. But I don’t see why people living in a Nashville suburb should not be allowed to return to their jobs because people like me choose to live, travel and work in urban sardine cans.” What? How do these two thoughts connect at all? New York is driving the virus? New York is setting policy for the virus? What do the living conditions of New Yorkers have to do with the spread of COVID-19 across the country? What does Stephens have to say about New Orleans, a city closer to Nashville and severely impacted by the disease? What about Florida? Georgia? His thoughts don’t track in this column at all. He is saying nothing that a Times Square t-shirt doesn’t cover. DA BIG APPLE, BABY! CITY THAT NEVER SLEEPS!

Stephens sticks the landing with some genuine bigotry: “Gina Raimondo, the Rhode Island governor, was on to something when, a few weeks ago, she wanted to quarantine drivers arriving from New York.” Another moronic suggestion: this is a request for authoritarian power in a country that can’t coordinate between its federal, state, and local leadership. The American government couldn’t institute a nationwide quarantine right now even if it wanted to: without fascistic enforcement, people will break quarantine.

Stephens concludes: “The rest of America needs to get back to life. We New Yorkers prefer our own company, anyway.” Says the guy who grew up in Mexico City and went to boarding school in Massachusetts. Don’t speak for New Yorkers. Who prefers their own company? People living in Chinatown tenements? South American and West African immigrants biking and bustling up empty avenues to deliver $75 orders of chicken parm to their feudal overlords? Those that can’t telecommute to their job at Whole Foods and still take the subway every day? I’m sure they’re thrilled to be a New Yorker right now.

Stephens doesn’t have a Trump-sized bullhorn, and most Times readers are suspicious of reopening the country so early. This isn’t a dangerous column; it’s just stupid.