We Are All Stasi Now

Inequality and isolation in lockdown UK. 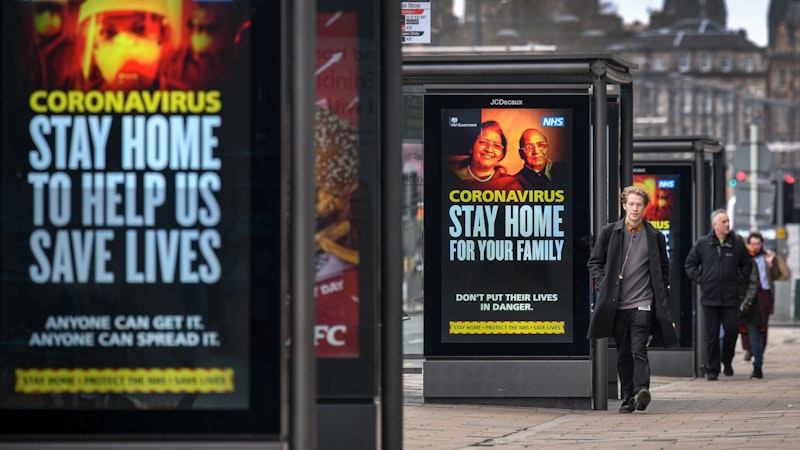 How are you coping with the lockdown? I’m enjoying it. Not that people are dying, or that so many people are afraid, but I like the solitude, quiet walks in the country, empty streets, fresh air, the sound of birds singing, the sight of blossoms on the trees, the onset of a joyous and bountiful spring.

Even the reported deaths might not be as bad as they seem. There are people dying nearby—even some that I know—but overall, I think, there may less death in the world now that the agents of violence are unable to pursue their global strategic aims.

I can’t confirm this. Lockdown has driven everything else off the news. There may be wars raging all over the planet. But with the emergence of this new invisible enemy, maybe the human race can stop making an enemy of itself for a change and focus on what unites us: which is that we’re all at risk now, regardless of what class or color or part of the world we are from.

Here in the UK our Prime Minister is apparently recovering from the illness. I say “apparently” because he seems to have tested negative for the virus an inordinately short amount of time after having been in intensive care. It seems too quick, and too convenient. Does that mean he never had the illness? Who knows? But it’s a measure of the trust people feel in the government that the question’s even considered.

This is a slightly tongue-in-cheek proposition, but whatever else you can say about Boris Johnson—and whatever the cause of his hospitalization—he’s capable of spinning anything in order to gain people’s sympathy. We’re living in strange times and we can no longer take anything on trust.

That’s not the only conspiracy theory making the rounds. David Icke has made incendiary remarks connecting the illness to the emergence of 5G technology. Icke’s a fringe figure—despite having hundreds of thousands of Twitter followers and the ability to fill the Wembley Arena for 12-hour lectures—but his views are widely circulated. For instance, Eamonn Holmes, a middle of the road news anchor on ITV, Britain’s second broadcaster, said that the 5G conspiracy story was easy to dismiss because “it suits the state narrative.”

It’s not often you hear a line like that from the sofa of This Morning TV. He said, “I don't accept… mainstream media immediately slapping that down as not true when they don't know it's not true.” Holmes is about as mainstream as you can get. He’s since said that he had been misinterpreted.

Our Queen, meanwhile, has been on television urging us to stay indoors. This is a bit rich coming from a woman who lives in a house the size of a shopping mall, with grounds the size of a large city park, and who also has several other spacious residences to isolate herself in. Her son and heir decided to spend his own period of isolation, along with his entire staff, at the Queen’s 50,000-acre Scottish estate in Balmoral, despite having several homes of his own to choose from.

In the cities there are people who have little more than a single room to live in. How does she imagine that would feel? Many people have mental health problems. A friend of mine lives in a small apartment on a housing estate. He has people on all sides and above, and the walls are like cardboard. He has no garden. Recently one of his neighbors went berserk, breaking all the windows of his home and then setting light to it, before the police were called. Clearly the isolation was getting to him.

Then we have the police patrolling our streets and parks looking for errant isolation-breakers and other anti-social elements refusing to comply. Another friend witnessed an old man with a walking stick being harassed on Brighton beach after he sat down to rest. Three coppers for one old man. You’re not allowed to sit on a beach, sunbathe in the park or swim in the sea—even if you are more than two meters apart—but you’re allowed to wander around the supermarket aisles, breathing the same fetid air as your fellow shoppers, for as long as you like. Don’t you think there’s something wrong here?

People are informing on their neighbors, calling the police to illegal barbecues or grassing people up when they have visitors. This brings to light how tyrannies arise since we’re now living in one. Remember how fascinated we were at the stories of betrayal in East Germany, with neighbors informing on neighbors, and apartment block spies handing people over to the state authorities? It seemed so exotically grim at the time. It turns out they were just like us: concerned citizens wanting everyone else to obey the rules. We’re all Stasi now.