Catching up with Shaheen Wacker and Mic Oala, two of the women behind Black Lives Matter Berlin. 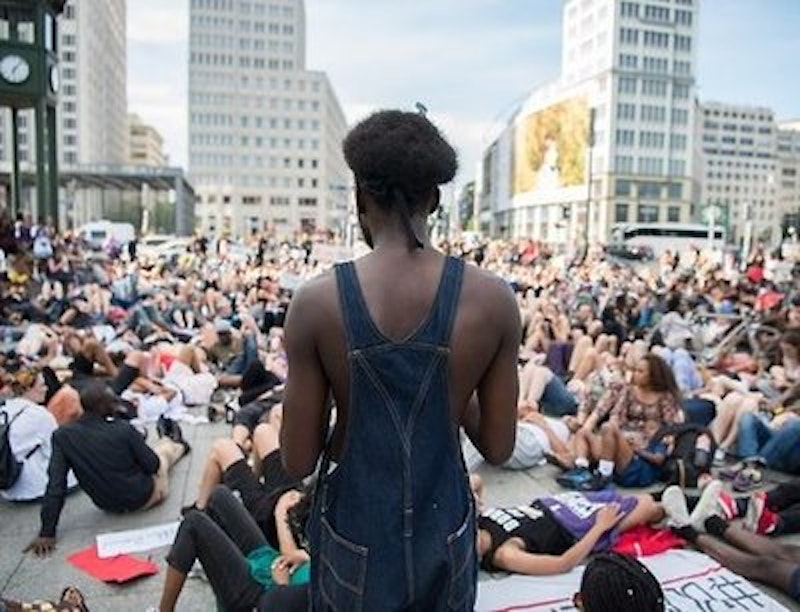 As everyone celebrates Gay Pride, puts on their rainbows and gets lit on Absolut Cocktails, let’s consider Black Lives Matter. Black Lives Matter centers on black women, queer, trans and disabled people as well as those without papers, people along the gender spectrum and those with records. If you have a problem with any of that, you should sit down with yourself and think about your politics.

During the month of June, Black Lives Matter Berlin—a new unofficial offshoot of the American chapter—curated a program of cultural events, movie screenings, dance workshops, poetry nights, and panel discussions that collected the experiences of black people in Berlin and of the diaspora. Organized by the feminist women*collective, Black Lives Matter Berlin is one example of how grassroots communities can create social change. Real change is never created by waiting for permission, funding or sitting idly but by jumping straight in, feet first.

More than just a march, Black Lives Matter Berlin created space for people to come together and build a community around racial justice, creativity, food, music, dance, storytelling and joy. Because black and brown bodies and communities are constantly under attack, here and elsewhere, we need community now more than ever. Community ties us together. Community reminds us we’re not alone.

Splice Today: Black Lives Matter Berlin offers a rich program of cultural and political events centering blackness and black people throughout the month of June. This is the first time you’ve programmed a month of activities. What have you learned so far?

Shaheen Wacker: There’s a disparity between the reality of black people in the US versus black people in Germany. There’s not really a united black community in Berlin. You have the Ghanaian community, the Nigerian community, the black German community, and isolated individuals who are often not connected to their heritage. There are also lots of people who are not really political with their blackness. Obviously we experience racism but we learned different ways to deal with it because in Germany you cannot rely on the power of a community to help you.

Some dance crews planned to hold a workshop last week that was free for black people and people of color because we wanted to center black people and people of color. They should have the opportunity to come without being concerned about having enough money. We have a month-long program, and if everything costs money then it’s not realistic to expect people to come to everything. So that was the idea—it’s free for black people, people of color, but white people can come on a donation basis. But it wasn’t communicated clearly and so there were people who were concerned about reverse racism or that we were seeking revenge on white people. That was not the idea, but as it is most of the time, white people and their feelings get centered. It becomes how would [white people] feel if we do this instead of how would black people feel if we do this for them? We learned that it’s very important how we communicate because sometimes we are too academic and think that all people know what racism is, that it’s systematic, and that people of color don’t have the power to be racist against white people.

ST: It’s true that conversations around blackness and brownness often get co-opted by whiteness and white feelings. How did you diffuse the situation?

SW: We made it free for everybody but we talked about how being pro-black doesn’t mean anti-white after that workshop too. We want to have white people on our side who support Black Lives Matter and who want to support their friends. We had a talk after the first workshop and asked the group how they felt about our idea that this workshop should be for black people and people of color. White people understood it and black people and people of color came because of that, so most of the time it’s preaching to the choir. But the whole discussion was food for thought for everyone involved.

Mic Oala: What I also found really good was that the idea caused quite a debate within the dance crews who hosted the workshop, even if people didn’t understand or support the concept at least they started thinking about it. It’s one thing to do cute events and it’s another to talk about political issues. One of the dancers commented that we have a good life in Germany. “Yeah, there’s discrimination here and there, but in general it’s all good.” But our talk was a wake-up call for some, and I think this was really, really good.

ST: In light of wakeup calls, what was the moment or series of moments that led you to launch a Black Lives Matter movement in Berlin?

SW: Recognizing that there’s a reality that black people live in that white people have no idea about and don’t care about. That reality is only reflected in mainstream as the arts we do. Dance, music, rap—these are expressions of what black people have experienced in history. It’s about the beauty and power of rising from the ashes and creating beautiful things from violent experiences.

MO: Of course we do something good, and for a good cause. But at the end of the day, we do it for ourselves. It’s self-therapy, it’s self-empowerment.

ST: You spoke earlier about the disparities of being black in Germany versus being black in the US—that black folks in Germany aren’t necessarily unified and have a range of experiences. How would you describe the main differences?

SW: Black people are not seen as German or as part of Germany, so there’s also no interest in black German history. I heard that in America you learn about slavery in school—at least maybe one session or something—and then if someone has a question everybody turns to you because you’re “the expert.” In Germany you don’t even have that. When you meet people they ask you where you’re from and when you say a German city they’re not really satisfied and ask you “Where are you really from”—they want to look back to your family tree. But there’s much more oppression for African people and people who have African parents, don’t speak the language like I do and especially refugees because they don’t even have legal papers to do anything here.

ST: Which event has been your favorite so far?

MO: The Krump workshop! No really, there are so many different programs and everything I’ve attended was really special, food for my soul. You want to laugh and cry at the same time because you’re so touched by each and every person. There’s poetry, dance workshops, storytelling. And then A History of Remembering organized by Isaiah Lopaz. It was a huge dinner table for 40 people in a gallery space. There were three black women who did a mixture of storytelling and poetry about their life experiences. Then Troy, one of the brains behind Jamaican fusion restaurant RosaCaleta, and his team came with bowls and plates full of the most delicious dishes of Jamaican cuisine. After the dinner Troy took the microphone and talked about his life, his upbringing in Jamaica, his grandmother. You could feel how everyone was touched and nourished by the food and the stories.

ST: The Black Lives Matter Berlin March kicked off on June 24th. What would you say is your hope for the March this time around?

MO: There are a lot of people in Berlin who just do things, even without funding, just like we’re doing now with Black Lives Matter Month. We also don’t have the funding. It’s very grassroots work and we can only make a change by really putting our time, money, energy, and health in it. People have to sacrifice a lot for this, but then again it’s also empowering. That’s why this Black Lives Matter Month is so good. We’re finding other people who are ready to do it because there are already so many people fighting. We just have to find each other.

SW: We have a Black Lives Matter calendar now, and that’s a step. You can see every event in Berlin that’s connected to black people. And that’s something I’ve been looking for forever.