Otto Warmbier's pain was funny to them, and he wasn't even a bad guy. 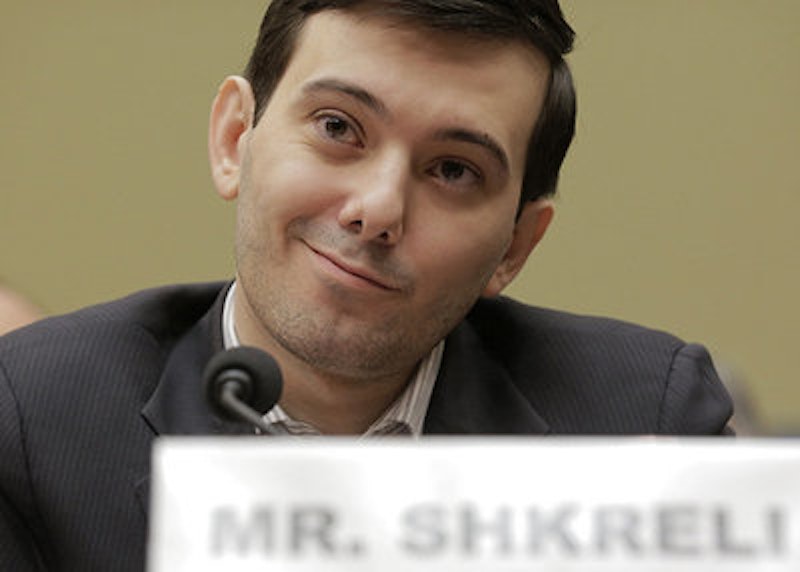 The so-called Pharma Bro, Martin Shkreli, is now on trial in Brooklyn for securities fraud. Many on the left think of him as “the most hated person in America,” and they'll once again remind everyone that the former head of Turing Pharmaceuticals is the newest Satan. It's hard to find a better opportunity to burnish your credentials as a good, caring person than taking potshots at this brat-faced worshiper of free markets.

To prepare yourself for the deluge of Shkreli abuse, take a moment to ponder the case of Otto Warmbier, the former University of Virginia student sentenced to 15 years hard labor in North Korea last year. The rogue state returned him to the U.S. in a coma recently, and he died in his hometown of Cincinnati shortly thereafter. Most likely he'd been beaten into that coma. Warmbier never jacked up the price of a crucial drug exorbitantly, nor did he behave “creepily” on Twitter towards a feminist writer for Teen Vogue. He was just an anonymous college student who’d been arrested in a prisoner state.

In such times, Americans used to rally around each other. Now when the worst person in the world has decided you'll get a perfunctory trial in one of his kangaroo courts for the alleged crime of stealing a poster and hurting the will of the North Korean people’s will to work, the sympathy you'll be accorded is directly related to your identity, not your nationality or the simple fact that you're a fellow human being. It comes down to your skin color.

Warmbier, a white frat member from an elite university, quickly became a target for ridicule. Larry Wilmore, host of the since-cancelled Nightly Show on Comedy Central led the charge against this new object of scorn, who was soon to be sentenced. With the word “ASS” superimposed on the screen, the 45-year-old TV host warmed up his eager audience by mocking the kid’s name, which sounds like “warm beer,” as he ran footage of the captive crying and begging the court for mercy. “Listen up, frat boy,“ Wilmore continued, lecturing the captive (“Otto Von Crybaby” he called him) that this isn't like some dumb frat prank.

Salon weighed in, of course, with, “This might be America’s biggest idiot frat boy: Meet the UVA student who thought he could pull a prank in N. Korea.” His plight was “richly deserved,” the left-wing media outlet added. The Huffington Post contribution was: “N. Korea proves your white privilege is not universal.” Ebony Magazine was so thrilled by the teaching moment Warmbier’s plight provided that it broke out some black dialect: “You Gon Learn Today: On the Revocation of White Privilege in North Korea.”

This is just a sample of the pure hatred emanating from the left, directed towards a fellow citizen who’d hurt nobody. Not one of the detractors expressed any doubt that Warmbier was innocent of the petty crime the prisoner state had accused him of, opting instead to take the word of the most repressive regime on earth. None of them mentioned conditions in North Korea’s infamously brutal prisons or what the possible sentence was. Instead, they sadistically took the opportunity to mock the suffering of a person who they knew nothing about. That he had parents (Larry Wilmore is a parent) who were also in agony meant nothing to them. That's a pathological lack of empathy.

So try imagining what Martin Shkreli’s in for now. He's already a bad guy to leftists by being white and college-educated, like Warmbier, but he's also the laissez-faire capitalist who has a punchable face. It's mostly because, as Reuters put it, Shkreli “outraged patients and U.S. lawmakers by raising the price of anti-parisitic drug Daraprim to $750 a pill, from $13.50, in 2015, when he was chief executive of Turing Pharmaceuticals.”

I hope the lawmakers responsible for the legislation that made it possible for Shkreli to squeeze the market like that weren't among the ones outraged, because businesses aren't generally in the habit of keeping prices low for altruistic reasons. Daraprim’s a generic drug any pharmaceutical firm can produce. Anyway, Shkreli dropped the price back down to normal profit range the same week The New York Times broke the story.

Shkreli’s being tried for securities fraud now in a case unrelated to the one that made him infamous. He's become the face of corporate greed, not by dint of the sheer amount of cash he's insatiably sucked up, but because he got involved in an issue involving emotions (sick people’s lives we're potentially at risk) and because he's a provocateur addicted to the limelight. People who are much greedier don’t make such mistakes. They maintain a blander exterior, and make sure that photos of them with a big smirk on their faces don't circulate all over the Internet.

Go online to see how badly many on the left want Shkreli to suffer now. They're sure he's guilty of this financial crime and deserving of a long prison sentence because he once jacked up the price of a drug for a few days, and then weirded out a Teen Vogue writer who’d taken shots at him. Of course they’re sure. Look how bloodthirsty they were to see the U.S.’s worst enemy destroy the life of a college student. Larry Wilmore only apologized to Warmbier’s parents after he'd died and the incriminating video had resurfaced. His hand was forced. On Twitter, they're asking the judge not to give Shkreli a break. He stands to serve 20 years behind bars, and that would bring great joy to many “liberals.” When it comes to punishment, they can never get enough of it when it's the “right” person who’s getting it.