The votes aren’t there now, and won’t be in August. 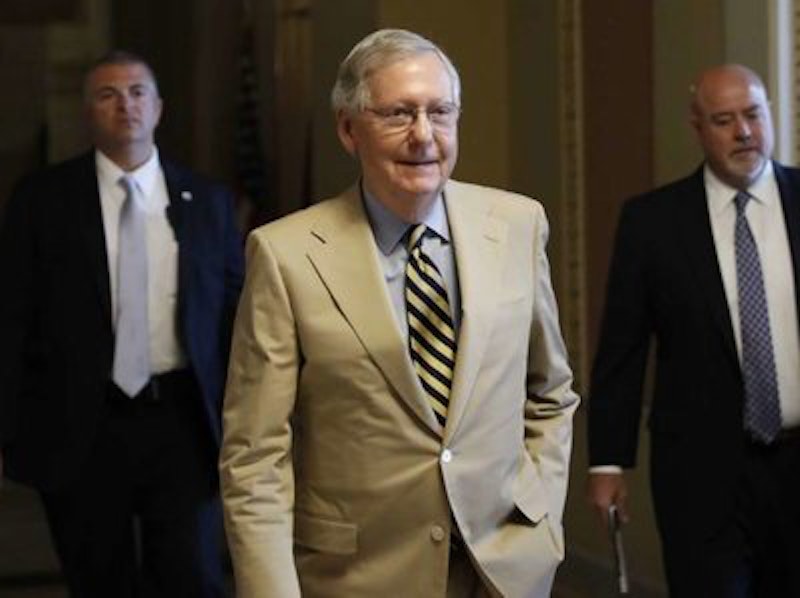 Caution: The Republican healthcare bill may be hazardous to your health. To begin with, chances are that President Trump has little or no knowledge of what’s actually in the bill. But he desperately wants to sign it so that he can chalk up a legislative accomplishment—any legislative accomplishment—and keep a campaign promise. He might not know that what Republicans call choice is having someone else pay the bill.

But just when the Senate bill needed momentum, Trump again stepped on his own story. His fusillade of tasteless tweets about Morning Joe co-hosts Joe Scarborough and Mika Brzezinski shifted the debate from the sick to the sick-o. Trump described the MSNBC morning show co-hosts “poorly rated,” “low IQ,” “crazy Mika” and “psycho Joe.” Worse, he tweeted that Brzezinski was “bleeding badly from a face-lift.”  That was enough to drive away even Trump’s supporters and allies in Congress and deflect attention from the business of governing. Makes you wonder whether Trump’s hat size is bigger than his IQ.

But back to the issue of life and death. The Senate bill, a re-work of the punishing House measure, is also an unrequited gift to the rich and the extraordinarily rich, which is the marshmallow center of Republican orthodoxy. It would eliminate a series of taxes imposed under Obamacare and Medicare. And the cuts affect only two percent of the population, those making $250,000 or more. The Senate version, like the House plan, is a massive redistribution of wealth camouflaged as healthcare revision. Now the Senate is considering backing off the tax cuts for the rich to try and pick up a vote or two.

To accomplish this fiscal legerdemain, the plan, the handicraft of Senate Majority Leader Mitch McConnell and a handpicked band of henchmen working in secrecy, would cut 22 million of the nation’s poorest from the Medicaid rolls to produce the $800 trillion for the tax off-set over the long haul. And this is where those with healthcare get kicked in the wallet. Every person in America who has a healthcare plan will be paying for free healthcare for those who don’t. The GOP plan removes the mandate and takes the nation back to where it was before Obamacare—healthcare for all paid for by the few because hospital emergency rooms can’t refuse treatment. They simply pass on the costs to the insured.

Many people with healthcare may not know it, but every time they pay a premium, whether by check or payroll deduction, about half the payment comes off the top to reimburse hospitals for the care they provide free for the uninsured. And so it will be the case once again if Trump and the Senate Republicans squeeze out enough votes to pass their version of the House bill to eradicate Obamacare. For all Trump cares, the bill could be written on the wind and he’ll sign it if it gets him on television and compresses into 140 characters on Twitter.

The Senate version of healthcare, as that of the House, was undercut by the non-partisan Congressional Budget Office, though with a finer blade. The CBO said the Senate bill would lop only 22 million cardholders off Medicaid while the House version claimed 23 million victims.

And here’s a noteworthy item that Trump should label fake news: Senate Republicans claim their plan would cut premiums, but for many they’d actually rise dramatically. For people 55-64, for example, premiums would more than triple in some cases. That is part of the whiplash of eliminating mandatory healthcare coverage and shrinking the insurance pool. Young and healthy people who require little healthcare may drop coverage that has the effect of raising the costs for older people who do require more.

Senate Republicans are splintered in different directions—the few who believe the plan goes too far, the few who feel the plan doesn’t go far enough and the strays who are terrified of facing their constituents. The majority supports the President and the leadership but the number is not enough, at this point, to pass the bill. With Vice President Mike Pence on standby to cast the deciding vote, McConnell can’t afford to lose more than two of the Senate’s 52 GOP votes. At last count, there were at least six Republican holdouts—and the list is growing—with different objections to the bill and not a single Democrat willing to support the plan to repeal Obamacare. Many Republicans are angry over McConnell’s handling of the bill in secrecy.

McConnell, with a motivating push from Trump, tried to force a vote by the end of last week. But lacking the required number, he was compelled to revise his timetable and hope for a vote and passage before the August recess. McConnell is using the intervening time to try and craft a bill that resolves all GOP objections. In the final frenzy to capture votes, McConnell’s team has added billions to combat opioid addiction and is tinkering with formulas and easing cutbacks. By the time the bill emerges from the sausage grinder, who knows what it’ll look like.

Winning votes is no simple task. Considerable pressure is coming from the states to ease up on the cuts to Medicaid. Thirty-two states and the District of Columbia had signed onto the Medicaid expansion under Obamacare. The expansion of Medicaid brought 11 million new people into the program. The Senate plan would convert Medicaid coverage for the poor, disabled and the elderly in nursing homes into block grants and allow the states to decide how much coverage to provide. Medicaid spending would decrease by 26 percent by 2026 and the savings would provide the tax cut for the wealthy. The working poor receive tax credits under the Obamacare system, but those, too, would be cut sharply by the GOP.

Maryland’s Republican Gov. Larry Hogan, who refused to endorse Trump but reluctant to criticize him for fear of offending his base of support, has been under considerable pressure from Democrats to speak forcefully against the healthcare revisions. Hogan says the GOP proposals won’t work for Maryland. “Congress should go back to the drawing board in an open, transparent and bipartisan fashion to craft a bill that works for all Americans,” Hogan’s office said in a statement. Fat chance.

In Maryland, the Medicaid expansion under the Affordable Care Act added 291,000 new enrollees to the program. Nearly 1.3 million Marylanders—about 20 percent of the state’s population—are covered by Medicaid and the Children’s Health Insurance Program (CHIP).

Trump has shown little interest in content of any kind, satisfied with bullet points, paragraph summaries and killer graphics, as one aide described Trump’s preference for simplistic visual prompting. The complexities of policy elude him, and his brief attention span must be satisfied within a minute or two or he’s dismissive. But Trump, who often hides his incandescent brilliance from public view, tweeted another simplistic solution to a complicated problem. He has reduced public policy to an apparent attempt to eradicate any trace of his predecessor, Barack Obama, having been president: If the Senate can’t resolve its differences, kill Obamacare for now, and come back later and replace it. Now that’s pure genius.