America Ain’t the Leader No More

Ya blew it, big guy. 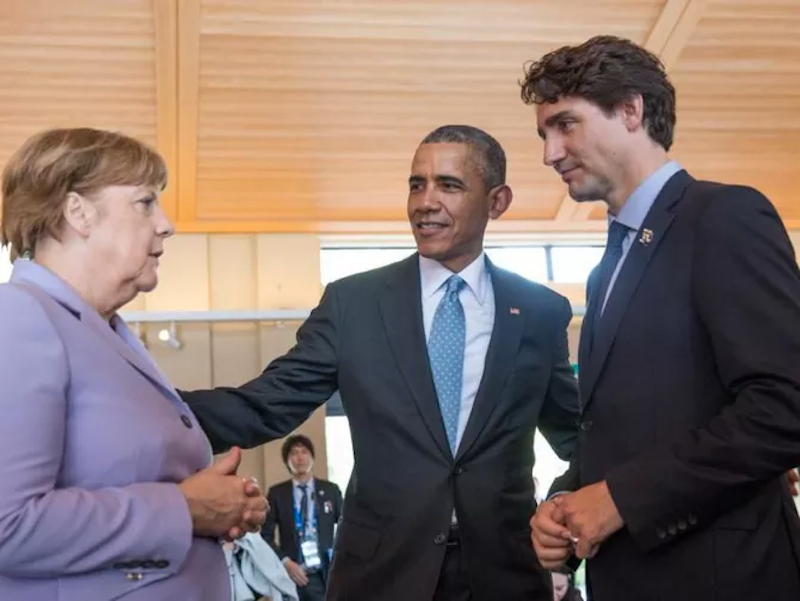 Here’s a neat meme. “I’m glad you both could make it,” says Obama. “I’d like to talk to you about… The Avengers Initiative.” You can see who’s in charge. Obama’s got a hand on Justin Trudeau’s back and another hand on Angela Merkel’s shoulder. Merkel and Trudeau have their faces aimed toward each other, or just past each other. Her chin aims down and so does his, and their hands are bunched in front of them, useless. Obama, half-smile on his face, is looking at Merkel. He looks at her keenly.

In real life, of course, today’s Obama is leader of nothing. Nick Fury runs SHIELD, Obama runs his mouth. That can be a valuable occupation, but it isn’t the same as power. As the leaders of the West seek a strategy, Obama can serve only as a figurehead. Like Thomas Mann in Los Angeles, he shows that his nation’s virtues can survive his nation’s activities. He doesn’t speak for America, he speaks (let’s be subtle) for one particular America, one that doesn’t have a government just now. He’s the favorite spokesman of a large swath of the US, maybe the majority. But that swath has lost hold of the executive, legislative, and judicial branches. Merkel and Trudeau make decisions. Obama gives voice to principles and hopes.

Put differently, America’s out of the leadership game. The West will have to cope without us. In four years we may be back, but not back where we used to be. If we sit at the head of the table, we’ll find that seat isn’t what it used to be. A leader has to be reliable; we’ve shown that we aren’t. Look at our record: twice in two decades and America’s gone haywire. That’s not reliable, that’s a menace.

In 2020, maybe drunk dad will go back to being dried-out dad. He’d better. But the family won’t forget. As a weary Lisa Simpson told Homer, “I wish I could believe you. This time.” America, that big thing, will keep on being important until its government caves in (which could happen). But the planet’s other industrial democracies can’t assume we’re on their side. Some gamma rays happened and now we’re the Hulk. Maybe we’ll fight the good fight, maybe we’ll rip up Tony Stark’s mansion. We’re something they have to plan around, not plan with.

As Rome’s empire got smaller, the emperors on the coins got bigger. In that spirit let’s enjoy the meme of Obama and his pals. I really get a kick out of Obama with his hand on Merkel’s shoulder.

DVD review. Clint Eastwood, like America, is weathered and sometimes addled, yet potent. In between fits, he made Jersey Boys, a perfectly good pop-star biopic costing $40 million. Reviews were mixed, with critics noting that Eastwood didn’t know much about East Coast pop music with Italian roots. Maybe, but Frankie Valli and the Four Seasons are great, and so are comical tough-guy mooks who wear satin jackets and fuss with their hair. Do a good job with them and you’ll have a fun movie. Eastwood did a good job.