About the convoy, Mayor Jim Watson says it is disruptive because it’s noisy. 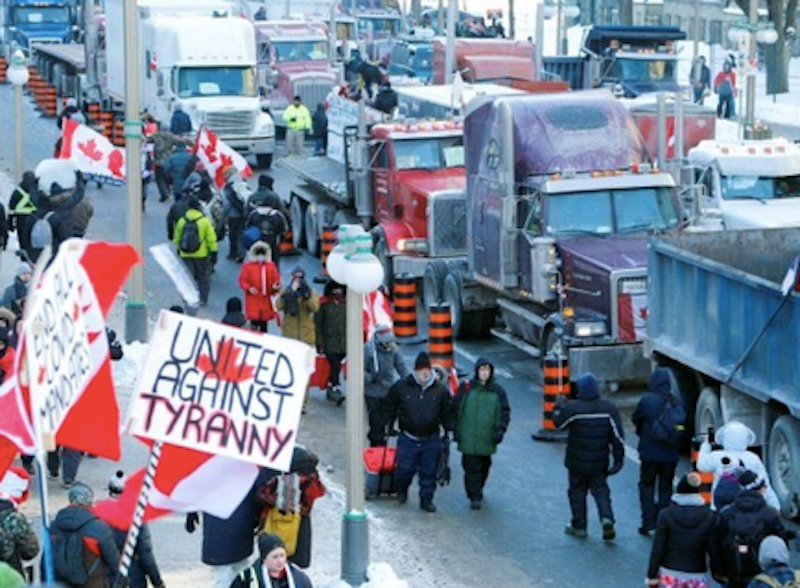 The watchword of freedom is evermore, resounding in strength and rejoicing in peace, despite the contempt of politicians who slander the Freedom Convoy and say nevermore. The watchword of the enemies of freedom, from the mayor of Ottawa, Canada, to the prime minister of Canada, is Stop, for the Liberal Party of Ontario and the leader of the Liberal Party of Canada have an illiberal disdain for the sound and fury of civil disobedience.

About the convoy, Mayor Jim Watson says it is disruptive because it’s noisy.

To the truckers, who rank in the thousands and fill the roads for miles, Prime Minister Justin Trudeau says leave. He says the protesters symbolize hatred and division, denouncing them for that which they not only abhor but seek to destroy: the Nazi flag. Trudeau ignores this fact, despite a $6500 reward—from the truckers—to anyone who can successfully identify the man bearing the false flag of tyranny and deceit.

As the truckers fly the Maple Leaf of nationhood, and as their members include First Nations people, the convoy belies Trudeau’s anti-racist rhetoric. Not that it matters, because anti-racism is the last refuge of a Quebecois mouthpiece with an arm tattoo.

In his refuge of certainty and protection, under the armed protection of the Royal Canadian Mounted Police, Trudeau’s free to exercise his privilege.

Outside his official country residence, where the largest of four houses is a mansion with 16 rooms and over $10 million in renovations, Trudeau’s free to isolate for five days on 13 acres. He’s free to pantomime maturity.

He's free to pose like a leader without acting like one, or practice his yoga poses without listening to the outside world. Regardless of the pose, whether he turns his back to the protesters or turns his gaze inward and does the deaf man’s pose, he’s deaf to the noise of democracy.

He refuses to hear the voices outside Parliament Hill.

If he hears anything, let it be the sound of the start of a hot boring day.

Let the day open with a montage of life, of sounds from a day in the life of a city, before the morning ends in silence.

Let the Peace Tower bells ring at noon, the chimes of ego and power fading in Trudeau’s ears, as a man with a white flag appears.

The man shouts but does not surrender.

He shouts a chorus of protest, a verbal salvo in lieu of a volley of rocks or bullets, because he forswears violence.

Those who would shout him down would just as soon order the authorities to shoot him down, unaware that those who bear arms—patriots and brothers to the last—are no society of killers.

Thus is the chorus an anthem—a chant—of courage and pride.

The chant crosses provinces and borders, echoing from the capital city of one country to the port city of another.

The chant is the cry of the people, faithful and free: “Ottawa! Ottawa!"