A Black Father's Thoughts on Ferguson 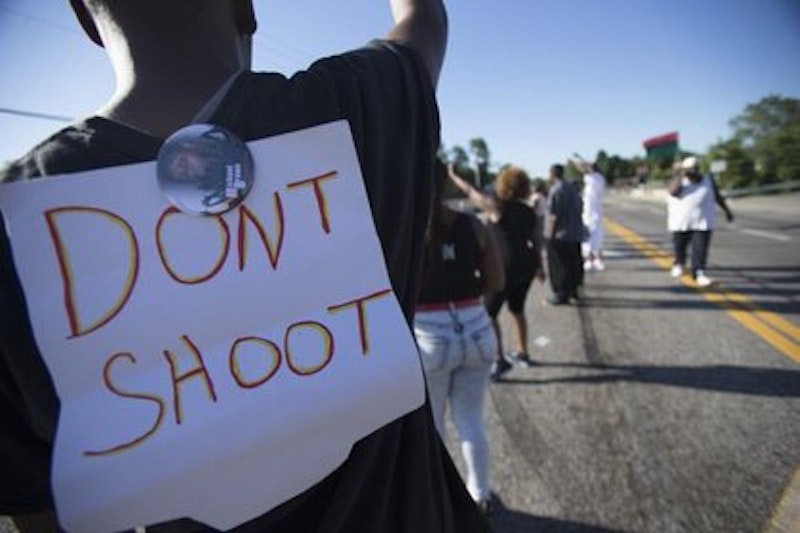 As a child, I spent every other weekend with my father. One of our rituals was to visit the Kmart on Liberty Rd., in Randallstown, a suburb of Baltimore. Dad would buy me cheese popcorn and I’d spend ridiculous amounts of time in the toy section, fondling Transformers and G.I. Joe figures with my eyes, working up mental Christmas lists. For every five intact toy packages in that section, there was at least one that a pint-sized vandal had violated and relieved of some character, accessory, or booklet—a reality that goes some way towards explaining my most memorable experience at this Kmart. I was in second or third grade, a dazed little kid drooling over something or other, when a store employee materialized and proceeded to harangue me. Surely, she insisted, I was stealing something, was preparing to steal something, or had at some point stolen something? I hadn’t; it hadn’t even crossed my mind. But the sheer, unhinged ferocity of these accusations led me to take on the albatross of guilt for a crime I hadn’t committed, or even considered committing, and, being young and scared and without a parent immediately at my side, tears sprang and ran down my cheeks—the employee was crying too, and in retrospect, she may have been having an emotional breakdown—and fled the toy section.

I waited for a long time to tell my parents about this episode. Kmart never held the same allure for me after that. When I actually did steal something from a store, two or three years later, the experience was comparatively anti-climactic, perhaps because the object I chose to five-finger was so deeply uncool. It was something I could’ve easily afforded, a present for a classmate who’d given me a Hardy Boys book for Christmas. The place was a nearly abandoned Frank’s on Reisterstown Rd. in that nebulous zone where it’s impossible to say whether you’re in Owings Mills or Reisterstown; it was early evening, and the cameras, scanners, and other means of anti-theft detection in place at more sophisticated chain stores were nowhere to be found. I can still remember how it felt to slide that bold of embroidery floss into my parka—it retailed for probably 69 or 79 cents, tops—and those intense bolts of guilt and fear that rocked me as my mother paid for whatever she bought and we exited through the sliding glass doors to her car. That was enough, at that age, to keep me clear of any further act of criminality.

Both of those stores mentioned above were shuttered long ago; the Kmart was replaced by a Home Depot, while the Frank’s, and the High’s which sat at its right flank, like a court jester, sit empty and bedraggled, awaiting deliverance via wrecking ball.

I’ve never been much for writing about race, or railing against racism, even as I’ve felt its ripples surround me and color my sense of the world. Much of the reason for this is defensive—the idea that by acknowledging racism, I would be granting a power or control over me. Better to look askance at it in a detached, intellectual way. Better to shrug. Better to smirk. Better to take solace in those who loved and understood me than to dwell too deeply on the death by a thousand small cuts that is life as a minority in this country. Growing up middle class in the 1980s and early 90s in a largely Jewish community—attending progressive and Catholic schools—I could receive the standard-issue civil rights education yet sidestep the thought of myself as a victim. Certainly, over the years, I felt my internal temperature rise over events personal and societal, but there was always some way to distract myself or unplug from real, true fury. I could dissociate from whatever had happened, or was about to happen. Note that I wrote, “could” there. “Could.” Past tense. Before Michael Brown, and before Ferguson.

In a handful of articles directly about or alluding indirectly to notions of racism for this site, I’ve barely begun to scratch the surface. There are so many stories I could tell, of discrimination coyly subtle or brusquely overt; they’re the same stories any person of color in this country could share. The sheer banality of these experiences seems to render them meaningless, minor, a small price to pay. After all, it’s not as though the governor sent the National Guard to attack my friends and me with fire hoses. It’s not like I was pulled over by police and slammed to the ground and searched and sent on my way without a word of apology. It’s not like a cross was ever burned on my lawn, or somebody scrawled “NIGGER” on my school locker, or my college roommates left a noose on my bed when I was in class. Nothing that overt, nothing that insane.

So: what’s different this time? What’s changed? What tipped the scales, what altered the angle? What’s got me so hot under the collar? Look, I’m not a lawyer, or an aspiring lawyer; there’s no point in attempting to parse the grand jury evidence from the dubious comfort of the armchair in my office. Nor was I on or near the scene when Darren Wilson shot and killed Michael Brown. There’s a lot I don’t know or understand about this, and about many other aspects of a world that grows stranger and less familiar with every passing day.

Here are some things that I do understand. I am the father of a terrific eight-year old boy who is mostly respectful, but who can be hot-headed at times. His mother and I devote our lives to teaching him right from wrong, just as my parents taught me—just as everyone’s parents teach them. The thing about children, young people, even adults, is that we do stupid things—sometimes small stupid things, like stealing from stores or mouthing off to authorities. And maybe, in theory, those are things we should do, learning mistakes—we get a stern talking to, we get community service, we get the belt.

We—and this is where I’m going to go #AllLivesMatter instead of #BlackLivesMatter for just a moment—should have the right to be people who made a bad choice and had to atone for it. Not thugs, automatically. Not criminals, automatically. Not animals. Not shot dead in the street meaninglessly—to say nothing of the galling incompetence of what came immediately after that. Regardless of whatever transpired between Brown and Wilson, Brown never got the chance to learn that stealing was wrong; nor did he have a chance to regret anything, to reflect on what he’d done, to laugh at the immaturity, the recklessness. What if his encounter with Wilson had gone differently somehow – if Brown had been arrested or just talked into returning what he stole? What if Brown and Wilson had struck up a begrudging friendship? What if? There is no “what if,” because Brown is dead, and Wilson – who is also very young – is unrepentant.

Let’s not even argue: this is more likely to happen to young black men and women in this country than to young people of other races and ethnicities. And while Wilson himself is a deeply troubling figure on too many levels to explore here, in some ways I’m less aggrieved over him and what his media interviews might indicate about American law enforcement than—deep breath, because this is what really, really pisses me off, and what most scares me in terms of the world my son is about to inherit from me—the dark, putrid, racist inhumanity of thousands upon thousands of comment-section trolls, unleashed and unfiltered, puking hateful opprobrium on the heels of every online Ferguson-related think pieces.

Yes, of course, everyone has a right to hold and express opinions. Certainly, there are reasonable, thoughtful commenters who argue quite eloquently and from a place of certainty that Wilson was in the right, Brown in the wrong—men and women who believe the truth on their side and probably aren’t horrible people; I’ve no real truck with them. The problem is that these people seem to be in the minority. The vast majority—you know who you are, and fuck you—are uncouth, bristling, unbridled racists trotting out genocidal jeremiads and triple-underlining cultural stereotypes. I’ve no idea who they are. I probably shop, drive on the same streets with, work with, vote with, and breathe the same air as these citizens, or their fellow travelers, without even realizing it. You probably do, too. Everyday. Pray they aren’t deputized, badged, and pulling motorists over, with justice system decks stacked in their favors, no matter what. Pray they don’t pull you over, or your friends. Or your children, when they’re old enough to drive.