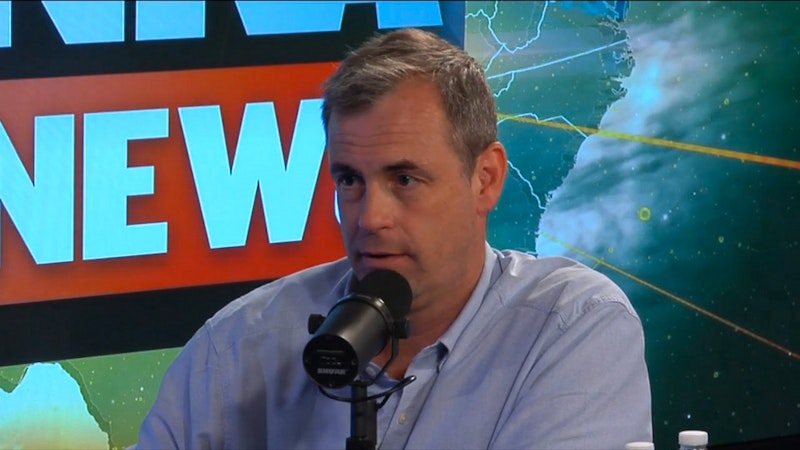 Some readers may remember the Weekly World News’ pseudonymous columnist Ed Anger, whose far-right screeds were so scabrous that, taken at face value, even a diehard John Bircher would blush upon reading them. I used to buy most of what MSM newspapers derisively dubbed the “supermarket tabloids,” since you never knew what might pop from their pages. And Ed Anger was pretty funny—one assumed his columns were put-ons—but the joke wore off faster than WWN’s silly UFO/three-headed giraffe covers. More than The National Enquirer—which went glossy and abandoned goofy sex & violence stories in the 197Os to cash in on celebrity gossip—WWN was, for a time, embraced by a small segment of the youth market as a kitschy conversation starter.

Anyway, today’s Ed Anger is an L.A. attorney/writer/veteran named Kurt Schlichter, whose loony columns appear on townhall.com and occasionally in newspapers like The New York Post and Washington Examiner. Give the guy credit: like Ann Coulter (although not as successful) he feeds fringe conservative acolytes with the nonsense they like to read. On Dec. 1, for example, his column “Obama Shafts Hillary With Amnesty and Ferguson,” can’t really be read with a straight face, although I suppose some people do. Schlichter’s also a stand-up comic, giving credence that he’s going for a Howard Beale of the Right persona, and maybe it’s working. It’s Schlichter’s putative notion that Hillary Clinton is getting screwed by Barack Obama, and that might be the lame-duck’s greatest legacy. Fine by me if Obama alienates enough Democrats that Clinton (or whomever the Democrats nominate) that a Republican wins the White House in 2016, although unlike Schlichter, I get hives whenever demagogue Sen. Ted Cruz opens his mouth.

Schlichter’s prose is so vile that any serious journalistic opponent of the Democrats—say Andy Ferguson, Matthew Continetti, James Bowman or Dan Henninger—must wince upon reading the man’s words. Like this: “It is important to understand that neither the executive amnesty scam nor the bogus outrage over Ferguson actually had anything to do with race per se. Obama and his gang are Marxists. This was always about class… Ferguson wasn’t about the nonexistent phenomena of white cops shooting unarmed black gentle giant college students for no particular reason. It was about keeping the [Democratic] core constituents angry while distracting them from the five million job competitors The One just imported.”

Tell me that’s not (tortured) comedy.

I agree that the Ferguson protests (outside of Missouri) were over-the-top, an opportunity for some fun—and earnest outrage—for mostly young people, and reckless when major thoroughfares were blocked for essential workers like ambulance drivers and firefighters. But no rational person would disagree that the circumstances of Michael Brown’s death were murky, and, furthermore, a flashpoint for all the anger over the ongoing violence in most American cities—against blacks and whites—most of which never gets reported. But Schlichter writes, “If sacrificing the life of some working stiff flatfoot from flyover country like Darren Wilson was the price, Obama and crew were happy to pay it. Like all outside the base, he is expendable.”

Obama’s a crummy president, in the mold of Jimmy Carter, but he’s not a Marxist (as his network of multimillionaire donors who financed both his presidential campaigns would affirm) and isn’t a patch on Bill Clinton when it comes to race-baiting. As for his immigration dictum, I don’t agree with the way he went about it—it’s a frightening precedent for what else he might do in his remaining two years—but it’s about time the issue was addressed, for it’s both morally and economically correct.

It took awhile, but finally there’s a pundit who’s angrier than Ed Anger.