The coming decades will redefine the nation. 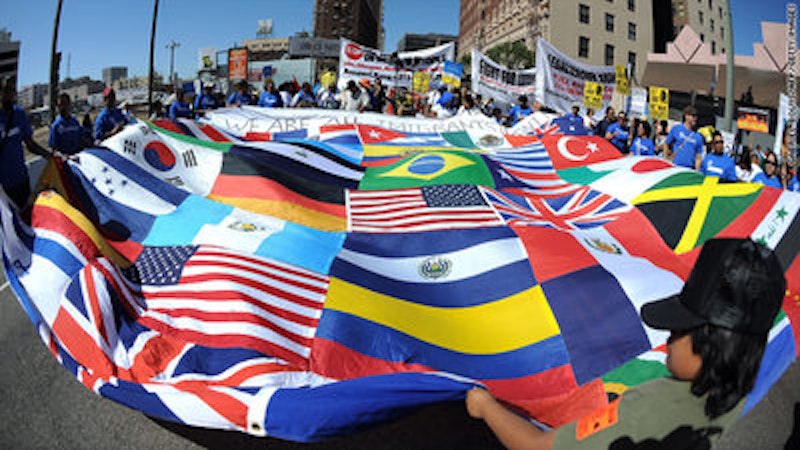 Diversity is supposed to be America’s most treasured and one-of-a-kind product. It’s our birthright. We import it. We export it. We revel in it. We’re all part of it. Yet, unique as it may be, diversity is, paradoxically, tearing the nation apart.

President Barack Obama likes to say that diversity is “who we are” and diversity is “what America is all about.” But the streets of Ferguson, Cleveland and New York—and dozens of other cities and towns across the country—tell a different story, the same tale of a half century ago that was written in blood in the streets, back roads and busses of the South and of a Civil War that took more lives than any other conflict.

The FBI reported that there were 461 civilians shot and killed by policemen’s guns in 2013, justifiable homicides, they said—but nobody knows the actual number—much in the same way that Michael Brown was shot at 12 times by a policeman, 12-year-old Tamir Rice was gunned down while playing with a pellet gun in a park and Eric Garner, an asthmatic, begged for oxygen as he was being choked to death in a banned practice by a cop. Grand juries in Ferguson and Staten Island declined to take action against the cops while policemen in Cleveland have been characterized as lacking adequate training. The three have exposed the raw side of diversity.

In today’s digital world, everyone with a cell phone is a photographer and everybody with a computer is a reporter. Already Obama’s urgent call for police body cameras has been turned inside out. The police chokehold that killed Garner was photographed by an amateur bystander and shown with numbing repetition on television and Brown’s lifeless body lay splayed on the street for nearly and hour. The abundant visual evidence failed to convince grand juries.

Civil disobedience is as American as the Revolutionary War. The cause of diversity is manifesting itself not only in racial confrontations with police but also in demonstrations on the streets to make the case for legitimatizing illegal immigrants who’ve staked a claim on American soil without proper entry. It’s a brazen new concept: We’re here illegally; make us legal. And with the stroke of a pen, five million of the estimated 11 million undocumented immigrants will be protected from deportation and on the tax rolls.

Diversity, sui generis, doesn’t necessarily compute with color. Diversity in America is a kind of symbiosis where a bunch of alien parts are thrown together and expected to co-exist, if not especially happily then at least peacefully, in American democracy. A Pakistani who goes to Great Britain is still a Pakistani. A Pole who moves to Italy is still a Pole. And a German who settles in Argentina will always be a German. But anyone of those who immigrates to America is—de facto—automatically an American, with, or even today without, the proper processing.

Diversity may be dandy in the short term but history is against the United States in the long run. The Union of Soviet Socialist Republics, that Cold War jumble of polyglot nations called Russia, imploded and fell apart because it was an unnatural alliance. So, too, did the Balkan states crumble into separate pieces, with the Serbs and the Croats behaving like the Hatfields and the McCoys of American lore.

English is America’s official language. But there are 311 different languages spoken in America—149 of them immigrant tongues and 162 indigenous to America, including mutations such as Ebonics and Gullah and even a piffle of a language called Wolof, an exotic import from Gambia. (It is worth noting that Ebonics, which disappeared as fast as it arrived in the 1990s, was a thoroughly contrived kind of slang and was designed to extract financial grants. Ebonics was a required language course at some colleges and universities.)

According to census data, there are 14 million households in the U.S. where English is not the primary language. Think back a century and there’s nothing new or novel about that. By contrast, most nations have one language and one culture. To put the matter into perspective, the Johns Hopkins Hospital, which serves its immediate East Baltimore neighborhood as well as the world at large, has 50 interpreters available 24 hours a day who speak 130 different languages.

Diversity is the newly sanitized word that replaced the abandoned and detested word “quota” of a couple of decades ago when every race, creed and gender was (and to a hidden extent, still is) reduced to a common denominator that fit neatly into a mathematical formula to meet some federally established guideline to achieve “fairness.”

The courts, for better or worse, have begun to unravel some of the artificially contrived quotas and affirmative action advantages.

The face of America is changing rapidly in many ways. Foremost among them is the steady arrival of Hispanic and Asian immigrants. The high birth rate among them and the corresponding low birth rate among whites will remake the nation as well as its politics. And unless Republicans figure out how to deal with the new political alignments, America will have a minority-majority white party and a majority-minority rainbow party which, to some extent, already exists.

Diversity implies discrimination. That’s what laws are for. But occasionally the arc of the law bends too far. In the 1960s and 70s, aggrieved minorities sought relief in the courts because Congress and state legislatures either refused or were slow to act on their complaints.

Today, minorities, mainly blacks and Hispanics, are turning to the Department of Justice and the White House for action because of the paralytic Congress and the unsympathetic high court. But the fact remains: When one group’s rights are broadened, another group’s are diminished.

Consider this: In Montgomery County, Maryland, the Board of Education voted to eliminate references to all religious holidays from its school calendar, according to The Washington Post. The declassification of Christmas, Easter, Yom Kippur and Rosh Hashanah followed a request from Muslim leaders to give equal billing to their holy day, Eid-al-Adha. Kids will still get the days off when they coincide with the holidays but they’re not supposed to know what for.

The velocity of history is overwhelming the ability of many to keep pace with it. Famine, war and disease are causing huge population shifts and migrations not only in America but around the world. Religions are being re-made and new ones invented. Gender assignments are being convoluted. Social movements come and go as anarchy and tyranny ebb and flow. Political realignments, nothing new in America, are breeding a new form of demagoguery.

Diversity in America is nothing new. Everybody here came from somewhere else, as Obama likes to say. And each new wave brings with it resentment—the WASPs resented the Irish, the Irish resented the Italians, the Jews were met with resistance wherever they went, there were riots when blacks were given their freedom in the 1860s and in the crucible for the expansion of freedom in the 1960s. Hispanics are the newest unwelcome guests (except to do the nation’s dirty work.)

There was a time when America was the great melting pot, when every new arrival strove to be an American even to the point of Anglicizing names and shucking ancestral traditions. The America of today is more of a mosaic than a melting pot. Most new arrivals want to claim a piece of the American pie at the same time they want to preserve their ethnic traditions and identities within their own circumscribed towns and neighborhoods.

The one constant throughout the turmoil and upheaval of diversity is that government is the glue that holds us together. Without government and the scold of the law, America would be just another tribal nation. Diversity is America’s house divided.