A cornerstone of the state’s peculiar politics. 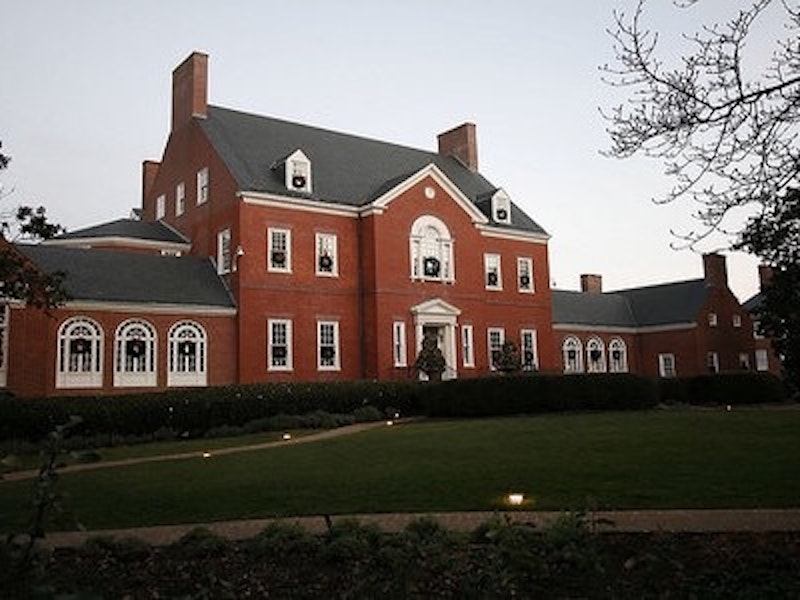 The following article was adapted from a longer manuscript.

It’s great to be governor. Maryland’s taxpayers are more than generous to their First Couple in ways that go beyond a paycheck (which is due to automatically increase next year.) There are countless reasons, and among them is an arms-length list of supplementary perks—a fully staffed 54-room Georgian mansion, a fleet of limousines with bodyguard-chauffeurs, an armada of helicopters, paid vacations and conferences at many of the nation’s glitziest resorts and most fashionable cities.

But of all the glitter and tinsel in the life of Maryland’s governor and his wife, none is more central—or in the recent past, more controversial—than “Government House,” the official name of the Annapolis residence where governors are required by law to reside.

Gov. and Mrs. Martin O’Malley (D) have been quiet about their eight years in the fenced-in house at the center of Maryland’s antique capital. So, too, were Gov. Robert L. Ehrlich Jr. (R), and his wife Kendall, during their brief occupancy except for Ehrlich’s bawdy mention at his 2003 inaugural of their trial run on the mansion’s beds. Ehrlich used the mansion to great effect as a fundraising venue where he regularly entertained small groups of donors and supporters.

But in the run-up to the recent decade or so, turbulence has been more the rule than tranquility. So let this be a warning and a guide to the incoming couple, Gov.-elect and Mrs. Larry Hogan (R). Welcome to life in a fishbowl.

The life of a governor’s wife is a lonely existence. She has 54 rooms to roam and ruminate in, and, occasionally, rearrange with the assistance and approval of the Maryland Historical Trust. She is separated from her husband not only by 200 yards of simulated antique brick street, but by the demands of the governorship—long days at the office and even longer nights on the political rubber-chicken circuit.

So the first courtesy of occupancy is to assign mansion ownership to “the people of Maryland.” Bootsie Mandel was so convinced that the official residence belonged to the people of Maryland that for six months she defiantly refused to surrender the mansion to her husband, Marvin, and her successor as chatelaine, Jeanne, during a nasty abandonment and divorce.

“It’s that damned mansion,” Mandel said at the time. “If it weren’t for the mansion this thing [the divorce] would be over.”

For over the years, the mansion has become the center of disputes as well as a metaphor for power. When Gov. William Donald Schaefer installed Maryland’s First Friend, Hilda Mae Snoops, as official hostess of Government House—oops, excuse the slip—the governor’s mansion, the first thing she did was to proclaim that the mansion “belongs to the people of Maryland.”

Patricia Hughes, wife of former Gov. Harry R. Hughes, a few years earlier, haughtily dismissed the décor of the Mandel-Lee years as “tacky” and rechristened the mansion as “Government House” with the proclamation that it “belongs to the people of Maryland.”

Jeanne Blackistone Dorsey Mandel, attempting to ease her entry into public life after years of rumors and romance in the shadows, announced to a reporter only hours after her hasty wedding that the “mansion belongs to the people of Maryland.”

Barbara Bootsie Mandel was so convinced that the residence belonged to the people of Maryland that she barricaded herself within its walls and refused to leave. Mandel complained then that the people of Maryland provide a residence for the governor and not necessarily for his spouse. To prove the point, Mandel even had the law researched and the findings leaked to Bootsie.

Only Mimi Lee, who was installed briefly as interim First Lady, truly believed that the 54-room Georgian mansion belongs to the people of Maryland. As far as she was concerned they could have it, do anything they pleased with it except make her live in it. She refused to have any identification with the mansion. She preferred the privacy and the easy comfort of the rambling Lee estate in Silver Spring. Mimi Lee spent most of her time as First Lady wearing Sonny’s Surplus fatigues and teaching canoeing and swimming to Girl Scouts in Montgomery County instead of skulking the mansion’s cavernous rooms as a lonely prisoner in a long dress.

When Pat Hughes moved in, her instant assessment was “tacky.”

When Jeanne Dorsey, still unmarried to Mandel, moved into the mansion on the same day in December, 1973, that Bootsie moved out, Marvin Mandel confided that Jeanne had spent hours “tearing the place apart and rearranging it.”

When Bootsie moved in, she said the mansion was run down and neglected. Even worse, the immediate past occupant, Spiro T. Agnew, had made off with the mansion bank account and all of the crystal except for several jelly glasses. Agnew also removed all of the wine from the cellar bins except one bottle of Manischewitz, perhaps his middlebrow idea of an ethnic joke.

The Agnews lived briefly on the Maryland Lady, the state yacht that Ehrlich disposed of by auction on eBay, while the mansion was being refurbished and wired with a sound system so that Agnew could listen to his favorite elevator music, Montovani. Agnew’s patrons at the same time installed and stocked a wine cellar as well as a sauna in the mansion.

Bootsie busied herself organizing the house to her taste. She ordered a new supply of matchbooks embossed in gold with the state seal and the words “Governor’s Mansion.”

“Government House sounds too much like a prison,” she said, even though that’s what the nameplate on the front gate read.

As a matter of record and observation, no one recalls a word, either pro or con, about the mansion from the mouths of Judy Agnew or Avalynne Tawes or Honolulu McKeldin. They were simple homebodies and happy wives who cared nothing about politics or attention and who had no need to use the mansion for other reasons.

Then along came Schaefer and friend who had just been given new authority over the mansion and one million freshly approved dollars to re-do what Pat and Harry Hughes spent $3 million and eight years doing which won a picture spread in Architectural Digest. The General Assembly had approved legislation that would transfer custody of the mansion’s public rooms from the Maryland Historical Society to a Governor’s Mansion Trust. And even before the changes and the budget were approved, Schaefer had ordered a $45,000 oriental carpet for the mansion’s grand foyer.

One of the first things Schaefer did upon taking office in January of 1987 was to complain that Hughes had left the mansion’s household budget depleted. Schaefer was forced to secure an advance from the budget department to pay for his inaugural dinner. It was later discovered that Pat and Harry Hughes, just before turning the government of Maryland over to Schaefer, had used the remaining $6000 in the mansion bank account to pay for alterations to their personal wardrobes.

There was ugly talk, too, that Harry and Pat Hughes had allowed many of the mansion’s one-of-a-kind pieces to be auctioned off as a way of raising money to buy furniture that fit the historic demands of the new period theme. No inventory or records exist. Another public fuss developed over the whereabouts of mansion furnishings when Mandel was forced to abandon the governorship following his conviction on charges of corruption and Hughes ordered an inventory after assuming occupancy in 1979.

During the 1987 session, a House of Delegates subcommittee toured the mansion and reported that it was in serious disrepair, especially the areas where the Hughes’ puppy was allowed to roam freely without benefit of paper training.

The pernickety Schaefer and Ms. Snoops were especially critical of the so-called Billy Baldwin room, done in the overstuffed style of the Maryland-born interior designer. To show their displeasure and disdain, they dismantled the room, put its contents in storage in the mansion basement and replaced them with electric trains at Christmastime.

During another holiday season, the room was used for an Easter egg hunt. The final tribute to Schaefer’s dubious taste was the Hilda Mae Snoops fountain that he had designed and installed on the mansion’s lawn. Schaefer, to be charitable, was Maryland’s king of kitsch.

Later, Gov. Parris Glendening (D) a succeeding occupant, in a huff and a display of executive privilege, ordered the fountain turned off after a feud with Schaefer over a Board of Public Works’ issue. Schaefer, in retaliation, outed the worst-kept secret in Annapolis—that Glendening was having an affair with a member of his staff who, as it turned out, was pregnant without benefit of clergy. This embarrassment contributed to Glendening’s divorce and hasty remarriage.

So why is the Governor’s Mansion or Government House or the Regal Residence or whatever it’s called, no longer just a big house but a very big deal? The imposing piece of brick real estate, encircled in its own spike-fenced plot of grass across the street from the State House, is more than a tax-supported roof over the governor’s head. It has become a cornerstone of Maryland’s peculiar system of politics.

Government and politics is no nine-to-five job. So the mansion provides convenient busy work for the resident first lady who, for the most part, is left husbandless—or friendless—to amuse herself for long and lonely hours of the day and night. Bootsie liked to say, “Look how much I’ve done for the mansion.” And she had.

Jeanne devoted as much of her puttering time to the mansion’s lawns and flower beds as she did to the interior of the house. A miracle of flowers took place with every change of season or bloom, all freshly installed in full blossom by agronomists from the state’s division of Buildings and Grounds at the expense of the budget of the Department of General Services. After all, the mansion belongs to the people of Maryland.

Jeanne’s indoor extravagance was reserved for the Christmas holidays, when commercial decorators were brought in to transform the mansion into a showcase for the ornament industry. The mansion belongs to the people of Maryland, and they had a chance to witness Jeanne’s holiday handiwork by attending the New Year’s Day open house, a custom that was later abandoned by the Hughes. About 2000 of the mansion’s owners would usually stop by for a look. Schaefer and Ms. Snoops appeared to share Jeanne’s exuberance for Christmas decorations, not only in the mansion but all state buildings whose occupants competed against each other with Schaefer as contest judge.

The official residence also supplies a handy public relations device that allows the first lady to put a smiley face on the family album. The slightest whiff of rumor or gossip about the private difficulties of Maryland’s foremost public figures will produce the stock story about the governor’s mansion and Maryland’s First Decorator. It’s a human trumpet’s way of blaring to the world that all’s well in the Faerie Kingdom hard by the Chesapeake Bay in Crabtown, USA.