$15 Million for a Book by Tucker Carlson Is Insane

There’s no market for his unorthodox politics. 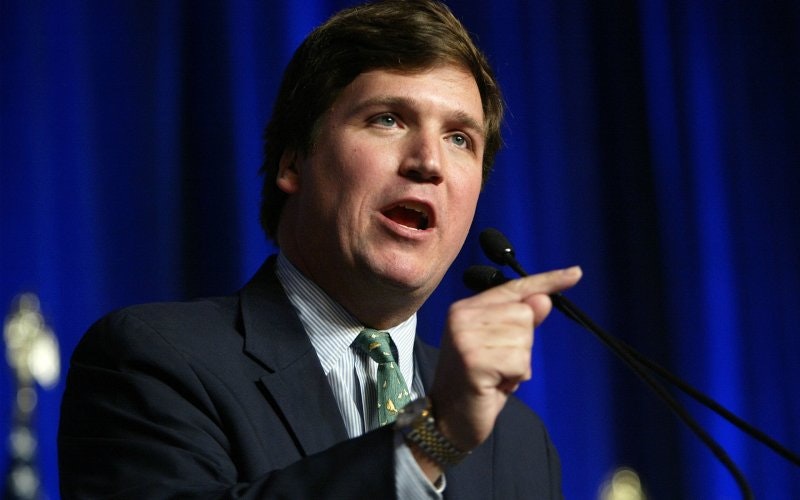 A New York publisher is about to take a bath. The publisher is whichever one pays out $15 million, the alleged asking price for a book by Tucker Carlson. Carlson is the Fox News personality who just replaced Bill O’Reilly.

When I heard that Carlson is receiving $15 million offers, I pictured myself as a successful Manhattan book editor who’s being pitched the idea for his book. I’d invite Carlson’s agent into my spacious office, offer him coffee, and then tell him before writing a check that I have a few questions.

Is the market for conservative books saturated? The conservative counter-assault against political correctness is now 30 years old, dating back to Allan Bloom’s The Closing of the American Mind. That 1987 volume was followed by Dinesh D’Sousa’s Illiberal Education, then Ann Coulter, who has written more than a dozen books. Coulter spawned Ben Shapiro, who has written at least five books about the awfulness of liberalism. Today there are Breitbart, the Media Research Center, National Review, Drudge, Glenn Beck, The Weekly Standard, and thousands of bloggers and YouTubers who hammer the leftist media every minute of every day.

Are the people reading these people in books and online going to shell out $30 for more of it from Carlson? Right-wing bad boy Milo Yiannopoulos fetched $250,000 for a book (it was never published). That amount is doable for Carlson. Anything more might as well go to charity, because it’s not going to be recouped in book sales.

Do Carlson’s personal political views hurt or help him? Carlson is not a traditional conservative. He flip-flopped on the Iraq War—with good reason, once the intelligence turned out to be bad—and is in favor of gay marriage, once arguing, "I'm just for marriage generally. I'm for people making a lifelong commitment. Do you know what I mean? I'm not against gay marriage, actually, and I'm the most right-wing person I know.” Carlson, in fact, skews libertarian. This says a lot for his intellect and independence, but it also clouds the pitch for a book. Who is the appeal to?

Libertarian books don’t sell as well as red-meat conservative ones, simply because there are fewer libertarians in America than conservatives. Besides, the best libertarian writers are the people who work at Reason, so that turf is well-covered. So if Carlson isn’t going to offer a Ben Shapiro shellacking of the left, or Bill O’Reilly bromides, or a screed about the transgenders talking over the world, but rather a kind of hodge-podge of righty argument and libertarian spin, is that enough to move $15 million worth of books? Would you buy one?

Will the personal story angle work here? Probably not. Carlson is a bright and pleasant family man and a solid journalist. He’s never been to rehab or caught with hookers. He was raised in a wealthy family by good parents. His father was Richard Warner Carlson, a former Los Angeles news anchor and U.S. ambassador, as well as president of the Corporation for Public Broadcasting and director of Voice of America. His stepmother is Patricia Caroline Swanson, an heiress to the Swanson frozen-food fortune and a niece of Senator J. William Fulbright. Carlson married the daughter of the headmaster of his exclusive Rhode Island boarding school. His brother is named Buckley Swanson Peck Carlson.

Sure, there was Carlson’s debacle on Dancing with the Stars but unless there was a bastard child spawned from his experience on the show, it’s old news.

So what’s the draw? What will make readers excited about buying a book by him? There’s one possibility. Carlson could sell the book as an expose of Fox News itself. He could pitch it in the fish-out-of-water genre, with Carlson as the squeaky-clean prep school kid thrust into Fox, our modern Caligulan circus. Better yet, he’s a Luke Skywalker figure whose mission is to balance the journalistic Force by confronting the Evil Empire, with Roger Ailes as Jabba the Hutt and Bill O’Reilly as Darth Vader. (Megyn Kelly could pass for Carlson’s virtuous long lost sister, assuming the Princess Lea role).

Sex, suspense, conflict, a hero in genuine jeopardy and an uncertain ending. That, I’ll buy.