A Remembrance of Larry Hogan, Sr.

The current Maryland governor’s father was GOP Congressman who called for Nixon’s impeachment. 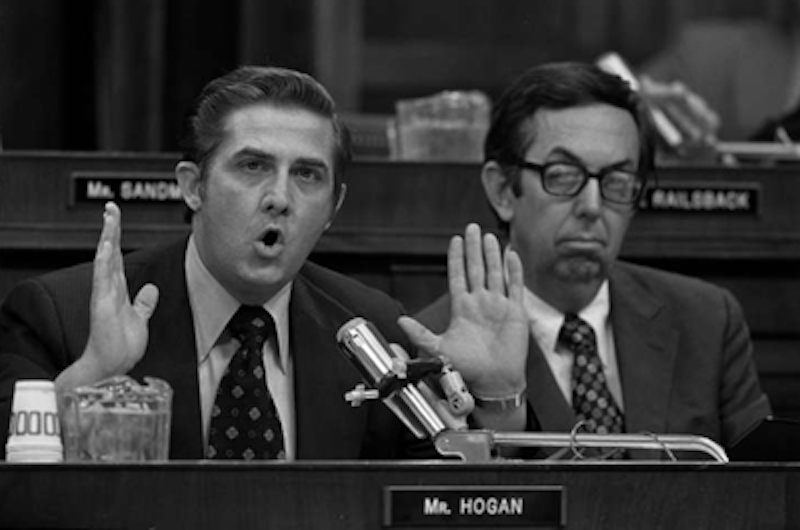 Obituaries are a form of autobiography. How a life is presented is pretty much how it will be remembered. Larry Hogan Sr., father of Maryland’s current governor, was celebrated, mainly in his own quoted words, for his courage as well as his defiance. But when Hogan Senior died on April 20, he left behind a paper trail that omitted several significant pages.

The obituary writers and other memoirists, who sought to bring Hogan back to life for a few farewell paragraphs, got the story-line right, quoting from archives and other reliquaries. But there were blanks in the narrative that even Hogan might not have known—such as the main reason for his defeat in the 1974 Republican primary election for governor. It’s the coda to his life and a footnote to history.

Hogan’s quotes at the time—lifted from ancient and molding files—attributed his loss mainly to his lone-wolf support for the impeachment of President Richard Nixon at the height of the Watergate scandal, the first Republican in Congress to do so. Hogan was the only member of the House Judiciary Committee to support all three articles of impeachment. One of the articles was sponsored by Maryland Rep. Paul Sarbanes (D) who Hogan would run against in 1982. But Hogan’s biggest mistake was entering a race for governor that he had no chance of winning.

The question lingers: Was Hogan’s act against Nixon a moral stand or a grandstand?

“I assumed that in coming out for the impeachment I would lose the nomination [for governor of Maryland], which I did. It had absolutely nothing to do with politics. I still resent people saying that now,” Hogan told The Washington Post in a 1987 interview.

Maybe so, likely not. Here’s a competing view of how and why Hogan lost the nomination.

Hogan’s career in politics began in 1962 as campaign spokesman for Frank Small, the Republican candidate for governor. It ended last November with a single vote for president, his son’s write-in. In between he served three terms in Congress, one term as Prince George’s County executive, and he ran and lost once for governor, once for U.S. senator, and he lost his initial run for Congress in 1966. But it was in 1974 that he met the immovable object that would end his career in elective politics.

Earlier that year, Hogan had announced his candidacy for governor—the year Maryland’s popular Democratic governor, Marvin Mandel, was waiting for his divorce to become final so he could marry Jeanne Blackistone [sic] Dorsey, his inamorata of a dozen years. On July 23, 1974, Hogan called for the impeachment of Nixon, and that night he bought 15-minute blocks of television time to explain his decision to the state he wanted to govern.

Shortly thereafter, Hogan, an ex-FBI agent, announced that he had hired a retired FBI agent and Watergate spy—John R. “Fat Jack” Buckley—to dig up dirt on Mandel, mimicking the very Watergate tactics he claimed to despise. Supporters of Mandel saw mocking humor in Hogan’s shambolic decision and bit back. They had pink-and-black bumper stickers printed with an elephant in one corner and a cautionary slogan that read: “Fat Jack is Watching.”

One was plastered on a state car and parked in front of the State House. It was photographed by a wire service photographer and appeared in several newspapers, as hoped for. Fat Jack called the State House and asked for one of the bumper stickers. The source of their origin or supply or was denied with good humor and a little white lie.

Hogan, like the 1970 Republican candidate for governor, Former Secretary of State C. Stanley Blair, Spiro T. Agnew’s hand-picked candidate, apparently thought he could exploit Mandel’s relationship with Jeanne Dorsey. Blair, who was Agnew’s chief of staff, arranged an IRS audit of Jeanne and had Attorney General John Mitchell order a wiretap on her phone. The St. Mary’s County judge who signed the wiretap order was godfather to one of Jeanne’s children. Mitchell’s buggers never had a chance. Hogan, by contrast, was relying on Fat Jack.

Mandel concluded his speech: “And I issue this warning. Any candidate, Democrat or Republican, who by innuendo, by suggestion, slur or smear, attempts to discredit my administration had better be prepared to document his charges or to remain silent. The public is persuaded by achievement, not by unproven whispers or hints.”

But Hogan, the Republican, had another opponent as well. He was challenged by another member of the GOP, and a longtime friend of Mandel’s who had served in the House of Delegates when he was speaker. She was Louise Gore, whose life Mandel had saved in 1963 when she lay near death after a fatal accident in which another delegate was killed. Gore was a member of the legendary political family that included a senator, a vice president and a famous author with politics as a sideline, and the owner of the popular Jockey Club restaurant in the Fairfax Hotel in downtown Washington. She was also credited for having introduced Agnew to Nixon.

In the summer of 1974, with Mandel’s campaign quietly underway before the formal announcement, and three months before the September primary election, a group of Republican legislators—led by Sens. Paul Bailey, of St. Mary’s County, and Edward Hall, of Calvert County—met with Mandel in his State House office. The chatter was mainly about the legislative session that concluded in April. Bailey eventually got to the point of the meeting: He asked Mandel directly which Republican candidate he preferred as an opponent—Hogan or Gore. Mandel was surprised by the question. But he smiled and settled on Gore—the former legislator whose life he’d saved. Not a word about impeachment, or Hogan’s role in it, was ever mentioned during the lengthy meeting. At the meeting’s conclusion, Bailey stood up and said: “Okay, fellas, let’s get to work.”

Context is important. At the time, party distinction in the General Assembly was, for the most part, a blur. Under Mandel’s speakership, and later his governorship, Republicans were treated as political partners. The GOP members of the legislature, many of them the liberals of the day, were the nucleus of the party’s political machine and election day’s reliable voter delivery system. They were largely extensions of Mandel’s political apparatus through the bonding and bonhomie of the legislature during that period.

On another occasion, a Hogan campaign employee, a Democrat, came to the State House with another offer: He suggested a peek at a Hogan poll in exchange for a look at Mandel’s. The trade-off was made. Both showed Mandel winning comfortably despite his abandonment of his wife for a divorcee and mother of four 18 years his junior. But they also gave Hogan a comfortable edge over Gore in the primary.

At about the same time, Democrats from Western Maryland had been urging Mandel to bring a popular Republican from the area into the fold. Mandel appointed Woody Peeler [sic] as a judge on the Maryland Tax Court of Appeals, in effect relying on Peeler as his campaign agent among Republicans in the western-most reaches of the state.

Organization is the key to winning primaries, and it’s one of two things polls can’t detect. The other is voter turnout. The Republican machine was now at work full-bore for Mandel. Hogan never had a chance. The night Gore won the Republican primary election and became Mandel’s challenger, Mandel turned and said: “How in the hell do you campaign against a woman”? But that was a long time ago.

—Frank A. DeFilippo was Gov. Marvin Mandel’s press secretary from 1969-78. Parts of the recalled material in this piece are extracted from his unpublished manuscript, Shiksa: The Rise and Fall of Marvin Mandel.