Those Dumb Kids and Their Mattress 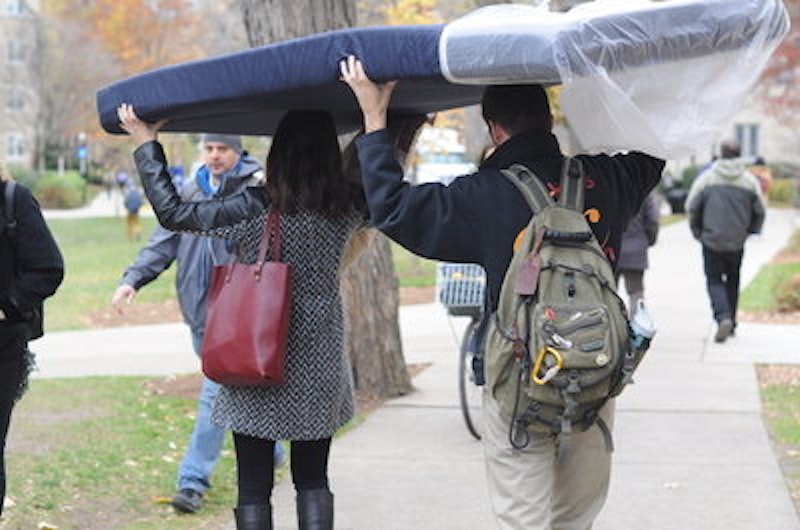 Brace yourself, here's a senior at Northwestern University on a serious social ill: “You’re erasing the very traumatic experience of people when you’re saying that people are whining or being childish.” And here's an open letter by some young members of the campus community: “As activists, peer educators, and compassionate human beings on Northwestern’s campus, we are writing to publicly express our outrage and disappointment,” etc. The compassionate human beings go on for 800 words, and the tone never changes: “victim-blaming glee,” “callous,”  “profoundly reactionary,” on and on. Not that many kids signed it, maybe 40 or so, but the document is still remarkable.

The letter writers are worked up because a professor wrote an essay, a high-spirited, maverick sort of essay in The Chronicle of Higher Education. The notion that dangerous profs seduce students is just melodrama, the piece argued, a story people tell themselves. The essay said teachers and students should be able to fuck, and that kids today fuss way too much about their alleged fragility. The argumentation was nowhere, but the professor (her name is Laura Kipnis, and her college years were the 1970s) put across an outlook: society is headed someplace bad when kids spook themselves and want to huddle inside a college's rulebook.

“Terrifying” was the word used by one student when talking about this essay. That word and The Chronicle of Higher Education don't get together too often. The student had in mind the essay's scoffing about the sex prof menace. Other kids throw in the piece's attitude toward trigger warnings and fragile student nerves. The professor is “flippantly” dismissing symptoms, the open letter says. She's “patronizing and reveals a deep lack of empathy,“ and she expects “survivors” to “conform to her narrow expectations.” The survivors in question survived whatever it was that left them unable to view a particular film for the professor's class. A girl interviewed by the student paper said she was the unidentified student whose request for an out is discussed in the piece. That girl said she had been diagnosed with obsessive-compulsive disorder. That was what she had survived, the diagnosis.

The open letter pioneers a new use for “somehow.” The professor talks as if the experience of a groping victim were ”somehow less traumatizing than that of survivors of genocide.” All right, the letter says “rape and sexual assault,” not groping, but everything in that category appears to weigh equally. Consider this: the letter accuses the professor of a “staggering disregard for the pain and grief that countless members of the Northwestern community have shared since last February.” That's when news broke on campus that a student said a professor had groped her. The news was followed by months of lawsuits and accusations, which people read about in the press. This is the pain and grief being disregarded: not the assault (or alleged assault) itself, but reading about it.

All in all, the letter finds her views intolerable: “We can only hope that the Northwestern community will meet Kipnis’ toxic ideas with resounding opprobrium, because they have no place here.” Admittedly, only a select few of the students appear to feel this way. Along with the 40 letter signatories, the college paper counts 30 or so kids who took part in a mattress-carrying protest and presented a petition that had about 60 names. Bear in mind that Northwestern has more than 8000 undergrads and more than 8000 graduate students. On the other hand, look at the campus groups listed with the signatures: Asian Pacific American Coalition, Rainbow Alliance, Title IX at NU, Take Back the Night. If you're an activist at Northwestern, odds are good that you take the letter seriously.

More from the letter: “anathema to the safe culture of healthy sexuality,” “gaslights, belittles, and condescends,” “spits in the face of survivors of rape and sexual assault.” Here's a favorite of mine: “callous in her delegitimization of vocalized trauma.” Which is the point made by the senior up top, the one concerned about very traumatic experience being erased.

The upshot is that the kids want something done. Responsible parties should set out the right line. Somebody in charge ought to say something. Or, as the “erasing” senior put it, “We’re not going to just sit here and wait for nothing to happen.” The mattress petition speaks out: “We call for a swift, official condemnation of the sentiments expressed by Professor Kipnis in her inflammatory article and we demand that in the future, this sort of response comes automatically.” They want the university to say the article is bad, and to say that any other bad articles are also bad.

The university is not inclined to do so. The president did consider the students' petition, but only as it passed his desk. He's bland but unregretful in his explanation. “It seems inappropriate to me for a college president to comment on a student vote or faculty op-ed,” he wrote, “but I understand why others might disagree.” (The student vote was a resolution referring to “the illegal occupation of Palestinian lands.” Alumni didn't care for it.) My guess is that the mattress escapade will have just two big results, both of which have already taken place. First, a selection of the kids got to meet with the vice president for student affairs. Second, a respectable feminist named Michelle Goldberg wrote an alarmed piece at The Nation that quoted Kipnis on “infantilization” and described an “intellectually stifling” atmosphere as professors fretted about social media blowback if some fragile student said their teaching had been a trigger.

Wait, here's a third. The dean of students came out to talk with the protesters, and later he gave the student paper a good quote. “I think it’s terrific that they’ve gotten together and decided they want their voice heard,” he said, and he said the university would “absolutely” consider the students' petition, which it did with the results we have seen. In effect, the dean of students patted them on the head.

Probably that's what the exercise was about. The former president of another school recently summed up her experience with modern students. She said a college girl came to her and announced she was starting a club for bondage practitioners and that the school should give it official recognition. Just having the club wasn't enough; she wanted sanction. As the ex-president (she's Judith Shapiro of Barnard College) puts it, students are now “in the habit of seeking formal institutional support and approval for the kinds of activities they used to be capable of managing themselves.” Sounding like Professor Kipnis, the ex-president refers to the kids' “self-infantilization.”

The good news is that the anti-Kipnis contingent comes to about 0.0075 percent of Northwestern's student body. But maybe that's because they're activists. People who get worked up about left-wing issues are always a small minority. Maybe the rest of the kids are just as feeble but don't think to package their drippiness as identity politics. They just go to the professors and whine one-on-one, in greater waves than the past, with a greater readiness to say that anything that makes them feel bad isn't just unfair, it's aggression. If so, there's one line the professors had better not try. “For me,” says the “erasing” senior, reflecting on Kipnis, “it was very annoying to see her conflate struggles together… to erase people’s difficult struggles by putting on a mask that this is just how life is.” But what if it is?