A Warning to Black Kids in the Ivy League 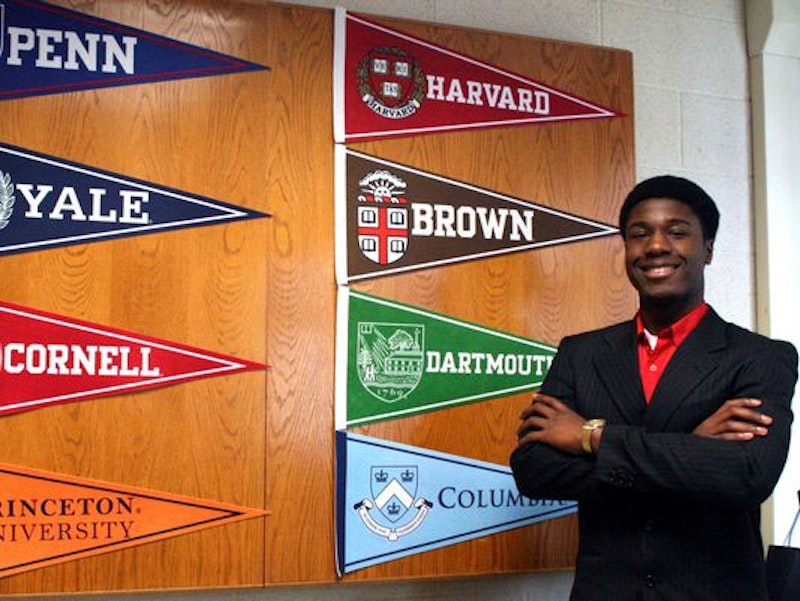 I was so surprised to go online and see the splash North Carolina overachiever Victor Agbafe—a black guy—made when word got out that he was admitted to all eight Ivy League schools. C’mon AP History! But black Long Island high schooler Kwasi Enin made a similar media splash last year when he was also admitted to all eight Ivies and ultimately chose Yale. In America, the 300-best-colleges-industrial-complex puts a premium on young people getting admitted to hot schools, particularly the Ivies and Stanford. But what I don't understand is why the media always goes crazy when an exceptional black kid does something like getting admitted to all Ivy League schools. Why is this national news?

The undertone on these types of media stories, which always masquerade as celebration and pride, is usually an element of surprise that a black kid could get into one Ivy, let alone all of them. The media wants black kids to be freaks. Freaky black kids make national news when they’re shot by police and they hit the headlines when, as freaks of intelligence and overachievement, they succeed and do amazing things.

Like Coca-Cola and Twinkies, “the Ivy League” is one of the most iconic American promises. For many, but certainly not all, it's the ultimate post-high school prize. If you can get into Harvard, well then you've really made it! Getting admitted when the odds are stacked against you is always good news so I understand the excitement. I'm not one of those people who thinks the Ivy League is useless or that a college education is no longer necessary, even as higher education shifts towards an intensely corporate model where 18- to 22-year-olds are seen more as customers than students by the university. I don't think everyone needs to go to college and, for that matter, I don't think everyone wants to go to college.

My message for black kids who want to be educated in the Ivy League is to work hard and make the best of the experience, but don't get lost in the fantasy. Sometimes I think about what it must have been like for Edward Bouchet, one of the first black Americans to earn a degree from Yale College in 1874 and the first American to earn a Ph.D, also from Yale. How did he handle daily acts of racism? Were there times he just wanted to totally give up?

You'll feel special because you're going to be an alum of a fabulous university. You’ll feel inspired by the campus buildings and have a sense that the work you’re doing is really important and necessary. You'll gossip with your peers about how low the admissions rate was when you applied and that will give you a sense of pride. You’ll go to Masters Teas with incredible people and you'll study abroad and work on important community projects. You'll make jokes about the other, “lesser” school in town. You’ll talk about “Y bombing” or “H bombing,” and you'll know someone with a cocaine problem. In a lot of ways this stuff is just part of the college experience. But when you're black, there’s more. A police officer will demand to see your college ID as proof you belong on campus, even when your white friends don't get carded.

The dining hall will serve fried chicken on MLK Day and you will wonder why. You’ll be stunned by the off handedly racist comments people around you make with relative ease and comfort. People you know—black people—will tell you you’re acting white. You'll feel strange that nearly all the service workers in the dining halls and people who keep the university clean are black.

As far as I'm concerned an Ivy League education is worth the experience. But don’t go there thinking it's a magical place without problems. You were black going in, you’ll be black the whole time there, and you’ll still be a black kid when you graduate.