Why Do Academic Talks Suck?

Presentations need to have some pizzazz. 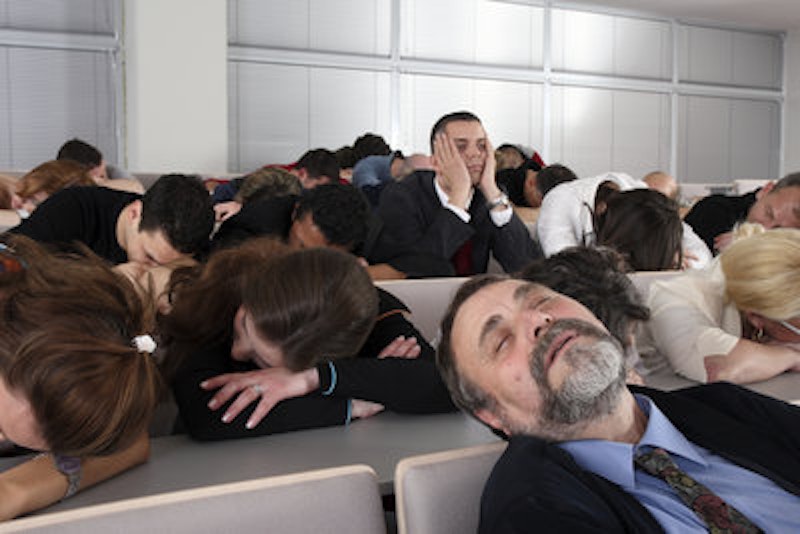 If I have to sit through one more academic talk I'm going to go up to the front of the room and take off all my clothes just to make things more riveting for everybody. Maybe I'll pull a banana out of my ass, too. Let's see. I’ve been to so many hotel conference rooms where a panel with a sexy title changes into the driest room on earth and you find yourself sitting there dreaming about the earliest opportunity you can save yourself.

Or you're that person who falls asleep.

It’s not always that the research is dull. It's usually that the presenter has no clue how to communicate ideas or engage with people. You know the drill: the PowerPoint presentation is terrible, with orange text on a hot pink background and flying animations. The presenter reads us bullet points we can already see with our own eyes. And the talk is read in a monotone voice.

Why should anybody care about your research if you can't make us interested or tell us about it in plain English?

By the time you make it to graduate school you're probably a reasonably intelligent person who can read, write, think and procrastinate, so intelligence is not the issue. The problem is that young academics aren't taught how to give talks and presentations because it's assumed you're smart so obviously you can communicate. But that's so dead wrong. Giving talks is part of the bread and butter of an academic. You’ll give talks that could land you or cost you a job—or your reputation. If you’re good you’ll be invited to lecture at universities all around the country. A good talk can lead to other exciting media and cultural opportunities. But the reality is that most graduate students, and even more senior scholars, don't understand how to communicate their ideas.

First, a few tips. Everybody gets nervous when they’re forced to speak in front of a crowd. It's like my violin teacher used to tell me whenever I had stage fright—“If you're not nervous then you probably don't care.” So take that nervous energy and work with it. All you really need to do is tell the room why the thing you’re talking about turns you on so much. Do that and make them feel its relevance.

But there’s more. Presentations need to have some pizzazz, a bit of magic. Your lecture is a performance, a one-act play. That's what I wish more academics understood. You’re starring in a one-man show of your own ideas. Blow that puppy out of the park! Nobody remembers boring talks. Nobody. Not even dull talks by really famous academics. I once saw an influential queer theorist speak in London and I was mentally gone within three minutes.

Academics have been trained to believe that if our ideas don't come across as verbose or complicated, then somehow the stuff isn't rigorous. It’s this thing where we think obfuscating something is the only way to sound like an intelligent human being. But any asshole can take a simple idea and make it sound super complex. It's called bullshitting. There’s a real art in making something look easy. And just one more note: black slides with white text, please!