When Students and Professors Do It

One woman says everybody ought to relax already. 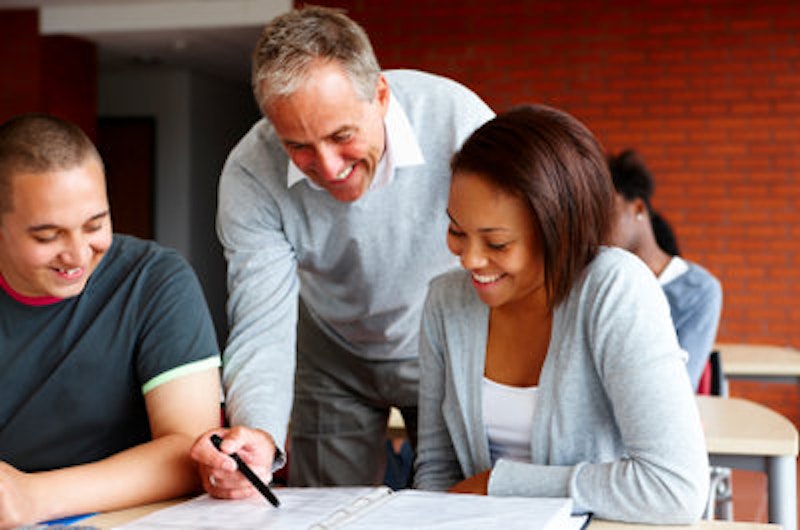 Laura Kipnis is fed up with the panic over professors dating students. She's a professor and knows plenty of marriages that started out with teacher-student macking. During the 1970s, she was a college kid and frolicked with her elders: “We partied together, drank and got high together, slept together. The teachers may have been older and more accomplished, but you didn’t feel they could take advantage of you because of it. How would they?”

I don't say she's wrong, because obviously there are people of her sort. Long legs, erect egos. Give them a chance to get out there and take their bumps; they'll live through it and like the memories. But she's playing dumb with this “How would they?” stuff. It's obvious how the professor could buffalo a student, or have a shot at doing so. Just by knowing more and being somebody who has accomplished a lot, and quite possibly someone who's admired by most people around them. Kipnis quotes her college's new policy and its warnings about “differences in institutional power” and the “inherent risk of coercion.” But the rationale is really that a professor is something. A kid may think it's a big deal to sit next to a professor. And maybe it is, maybe the professor genuinely deserves to be seen as a big deal. Meanwhile, his hand is near her knee. Is this a good situation? Yet the rulebook talks about “institutional power” and “inherent risk.”

Kipnis figures that underneath this muffled discourse lies melodrama: the elder is always predator, the student is Tess Trueheart. As Kipnis sees it, belief in this melodrama is taking a toll. “Students’ sense of vulnerability is skyrocketing,” she says. How did we get here? She gestures toward Title IX and federal punishment of colleges where kids file harassment and assault charges. Feeling her oats, the daredevil feminist gestures toward “institutional feminism” and the fact that “menopausal women now occupy more positions of administrative power.” In addition, she figures maybe everybody is making everybody else nervous: “These are anxious times for officialdom, and students, too, are increasingly afflicted with the condition—after all, anxiety is contagious.”

But here are her marquee explanations: “What no one’s much saying about the efflorescence of these new policies is the degree to which they expand the power of the institutions themselves.” And: “If you wanted to produce a pacified, cowering citizenry, this would be the method. And in that sense, we’re all the victims.” That one is the essay's finish. To connect the dots, I guess what emerges is this: we're all going through a process of mutual cringe. All parties are now quick to call their lawyers, so they scare each other into becoming more rule-bound and protected. The result is that the rules spread through more parts of our lives. Now the college wants to tell people whom to date.

Big picture aside, Kipnis is fed up with people creeping about and acting delicate. “The feminism I identified with as a student stressed independence and resilience,” she writes. The divide here has been talked about since the early 90s: feminists who think society, and especially colleges, ought to do something about male rampaging, and feminists who think we ought to proceed on the assumption that girls and women are powerful, self-reliant, springy in the joints and ready to learn. The compromise that has emerged appears to be this: women do lean on the rules more, but they remind themselves of their boldness by making greater amounts of noise. For somebody who doesn't like the rules, and is on the wrong side of the noise, this combo is debilitating. Kipnis: “The climate of sanctimony about student vulnerability has grown too thick to penetrate; no one dares question it lest you’re labeled antifeminist. Or worse, a sex criminal.”

All right. Back to students and teachers. They sometimes bump genitals. Problems result, and the school has to handle the problems. Otherwise someone (most likely the student) will call a lawyer. In the old days the lawyer went uncalled; not anymore. Kipnis feels that's too bad; when young she encountered no problems she couldn't handle. Of course, people like that often deserve great respect. But I don't think they're the standard. Other people, often some admirable ones, aren't anywhere that sturdy.

My guess is that Kipnis feels most college harassment charges are bullshit, whereas I suspect they have a good percentage of the genuine, enough to make problems in court. Now the colleges say, “This is why you can't have good things.” No more sex for students and professors. Decades of setting up harassment rules, and all they did was dump problems in the colleges' laps. Kipnis sees this as a triumph for anti-freedom. It isn't so good, I guess, but it gets the main job done.

And here's the main job: with all the worry about harassment, we need something to stop favoritism. Student-professor affairs have an effect on the students, the great majority of students, who don't sleep with teachers. Because, when it comes to grades, I suspect that the sleepers have a leg up. If they don't, the non-sleepers deserve proof that they don't. Otherwise, the non-sleepers can't assume that anybody is getting a fair grade. Best if no teacher sleeps with any student in his or her department; that's whether or not the teacher is tenured, whether or not the student is an undergrad.

Apparently, all we can do is blunder into this arrangement while trying to avoid harassment cases. So be it. Any society is blind in some interesting ways; here's one of ours. All this talk about sex and none about fairness.