Sex on Campus and in Dungeons 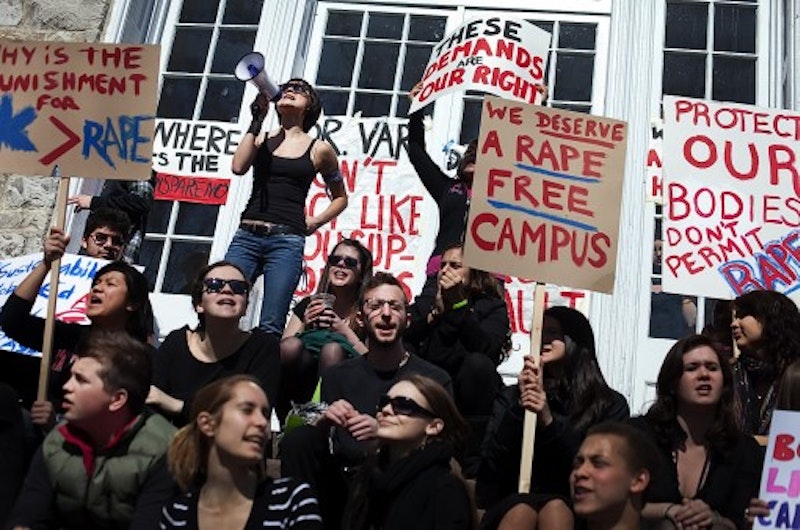 Brown University students are worried enough about reprisals for un-PC speech that several have started a reverse “safe space” for underground meetings of a club in which people are allowed to discuss taboo ideas, reports National Review. You’d think all of college should be like that, though I wouldn’t presume to dictate policy to a private institution.

I’m sure one taboo-yet-hot topic they’ll touch upon in such talks these days is what constitutes rape. The law should punish rape, which is clearly assault, as anyone committed to the idea that an individual controls her own body and property must agree. But precisely because a bright, shiny line on that front is a good idea—and not because I dismiss the significance of the topic—I am wary of the casual, even reckless way that some feminists are lately trying to expand the definition of rape until it becomes so broad that it risks becoming meaningless.

Gloria Steinem, interviewed by Elle (h/t Kelly Dwyer), thinks it’s wonderful sexual assault laws may be reformed in the direction of saying sexual contact must be “welcome” instead of merely consensual, and she adds the rather paradoxical-sounding thought that consent can be compelled, by such simple means as men doing more talking than women, while a woman may not think the resulting sex was a fully rewarding experience.

It really doesn’t seem like a good idea to move toward a world in which the law decides not merely whether sex was consensual but whether it was good and emotionally rewarding. On a similar note, some feminists are moving in the direction of saying consent is not enough and “enthusiastic consent” is required. The law is never going to render an objective judgment on your emotional state, which is why it tends to stick to mundane-sounding things like force, penetration, threats, pipe bombs, stolen money, unconsciousness (an important one in binge-drinking environments), blocking doorways, etc.

Better this than cops and judges thinking they can read everyone’s minds and judge their emotional well-being. Maybe someday when we’re all telepathic, but not yet, which is probably just as well.

But it’s unhelpful, I think, that some feminists are so insistent about the simple clarity of those lines that they will now become enraged at the offering of old-fashioned supplemental advice such as “Maybe to decrease the odds of rapes occurring, we should encourage virginal twenty-ish women not to live in sadomasochist sex dungeons full of drunken orgies”—as one of Deen’s alleged victims apparently literally did, saying she was at one point in the usual antics suddenly held down against her will by Deen and a woman in the industry who later tweeted, seemingly hypocritically, about how brave Deen’s accusers are.

No matter how many times you say that you aren’t declaring it open season on everyone in the sex dungeon, though, some feminists will accuse you of “blaming the victim” if you so much as dare suggest that a place like that sounds like a high-risk environment. Your mom would probably think so. Of course, the same people who all but call you a rapist for judging the dungeon are perfectly happy to warn you away from the local frat house. It’s all quite arbitrary, always dependent on the left’s free-associative whims and cultural allegiances.

If a frat house ever opens a sex dungeon frequented by lesbians, I imagine the feminists will have a complete mental meltdown trying to decide to narrow or expand their fluctuating definitions of “consent.”

There was a Supreme Court case a few years ago in which a man running a sex dungeon for long-term occupants argued that he shouldn’t have been arrested for imprisoning women, since they wanted to be imprisoned. He may be right (I won’t examine the decisive details here). I’ll only observe that it seems as if two leftist impulses are on a collision course: (1) don’t criticize the sex dungeon so long as it’s voluntary, they say, but (2) decry “rape culture” everywhere even in cases of seemingly explicit consent.

When in doubt, I think the feminists’ real hope is not so much that the participants get to call the shots but that the feminists themselves do, from afar, as the mood strikes them.

I’m reminded of a feminist lawyer I met—who would probably be considered a harmless moderate by most people who met her—who conceded that her ideal legal regime would simply be one in which women always have the arbitrary power of arrest over men at all times, as a sort of sweeping compensation (to women most of whom are long-dead, mind you) for all past patriarchal crimes (by men most of whom are also long-dead). Grand, sloppy historical score-settling on mass scale, in short. Great fun if you expect to be on the side meting out punishment, I guess (at least if you’re a sadist).

I’d counter that while culture and etiquette will always be gray areas, law is very dangerous when it lacks clarity.

Despite the gravity of these issues, they are dealt with in extremely humorous fashion in the new novel June by “Rev. Jen” Miller, a New York humorist, performance artist, and troll doll museum curator who used to be a professional sexual submissive. She clearly drew heavily upon that experience for the novel (if it’s literally true, there may even be a New York bishop out there who hired dominatrices at a local dungeon). In this world, she makes clear, there are assailants, mere creeps, and harmless weirdoes, and it’s worth sorting them according to common sense instead of ever-shifting political decrees. Sometimes it’s a matter of survival. If you want a funny, accessible first-person view of how navigating that strange world works for those employed in it, pick up the book.

As it happens, you can also meet (but not spank without permission) Jen next week at a benefit at the bar Cake Shop in Manhattan (nine p.m. on the 16th) aimed at raising money for her chihuahua Rev. Jen Jr.’s medical bills. I would have qualms about the chihuahua’s body being used without its permission, never mind its owner’s. I just think that instead of inventing new political paradigms to decide who can screw when, we’re better off with the same sort of common-sense notions of consent-granting being applied to sex that we apply to, say, letting someone tattoo you. Call me simple-minded, but try not to completely freak out. There have to be ways to discuss this civilly.

Regardless of whether Rev. Jen deserves your chihuahua-supporting money, though, she at least deserves your money for being an artist who is not Matthew Barney, judging by the dismaying, astonishing Gawker description of his latest six-hour film. No sex dungeon of which I’ve ever heard subjects you to gold foil-wrapped turds and close-up videos of streaming green diarrhea, as Bjork’s husband Barney does.

But again, as long as people consented to see it, paid their money, and didn’t flee from their seats, I’d say we can warn people away from the film by issuing friendly advice but obviously can’t arrest Matthew Barney. Not quite yet.