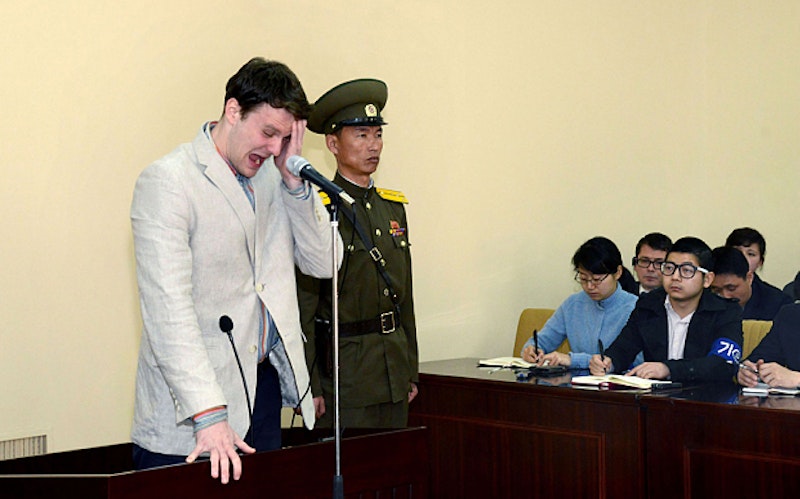 University of Virginia student Otto Frederick Warmbier traveled to North Korea over his winter break and ended up getting arrested there on January 2 for theft. The North Korean government recently announced that Warmbier has been sentenced to 15 years hard labor for crimes against the state, which in this case was attempting to steal a banner with a political slogan from a Pyongyang hotel.

Former UVA student Alex Zelikow, an ex-reporter for Japan's public broadcaster NHK, was recently arrested in Japan for possession of a video showing him having sex with a 17-year-old high-school girl. Tokyo police are claiming it was made with a hidden camera, and are charging the American with a violation of child pornography laws.

Both of these guys are in serious trouble. Neither of them understood an essential rule of traveling or living abroad, which is you must behave impeccably. While you may get away with a dumb frat house prank or dubious sexual behavior in the U.S. if you have a good lawyer, you're taking a huge chance if you choose this path in another country. Chances are, Warmbier picked the world's worst country to pull his little "prank" in, as North Korea is always looking for an American to detain as a bargaining chip, and their prisons are brutal places. And while you may think Zelikow is in a much better position, arrested in the advanced, sophisticated nation of Japan, that’s not necessarily the case.

In the U.S., Zelikow would’ve most likely been bailed out quickly on such a charge. Unfortunately for him, bail is the exception rather than the rule in Japan, where an arrestee normally remains behind bars until indictment or release. Zelikow will receive no presumption of innocence in Japan. On the contrary, he'll be presumed guilty until proven innocent, which almost never happens. Japan's conviction rate is over 99 percent, due to a system rigged to insure the arrestee is deprived of the rights Americans take for granted. It’s highly likely that Tokyo police will now be able to hold Zelikow for 23 days, by Japanese law. During this time, they’ll interrogate him aggressively without his lawyer being present. They'll mess with his sleep patterns and make him uncomfortable, including getting right in his face and screaming their questions at him. They're looking to break him and get him to sign a confession.

Otto Warmbier is just 21, so he gets a little slack in my eyes. No slack from 55-year-old Nightly Show host Larry Wilmore, however, who, in a sickening display of callous cruelty masquerading as moral righteousness, exploited Warmbier's arrest to vent on his hatred for frat boys, while presumably knowing full well the sentence this kid faced. "North Korea isn’t a playground for college pranks, Kim Jong-un isn’t a fictional character from a Seth Rogen movie, and Pyongyang isn’t some game you play with Coors Light and Solo cups,” said Wilmore. He continued: “It’s just tough for me to have much sympathy for this guy and his crocodile tears.”

Really? An avowed liberal can't find any sympathy for a student facing a steep sentence in a shithole North Korean prison for stealing a banner, just because he's a frat guy? Five will get you 10 that Larry would be crying just like Warmbier did in court if he were in his shoes, but he mocks his tears in the comfort of his TV studio. Wait, aren't liberals the ones so filled with compassion?

Zelikow is 30 though, and should’ve developed better judgment by now. I'm not going to defend a grown man who secretly tapes his sex session with a 17-year-old high school student, although it's possible I would when the sentence gets passed, depending how steep it is. I was once dragged off a Moscow-to-Greece train at two a.m. because I had foolishly allowed my one-week Russian tourist visa to expire. In the interrogation room, I was scared, but learned a good lesson at a reasonable price before they allowed me to re-board the train. I thought I could play games, but the Russians weren't playing, and neither are the North Koreans or Japanese now.