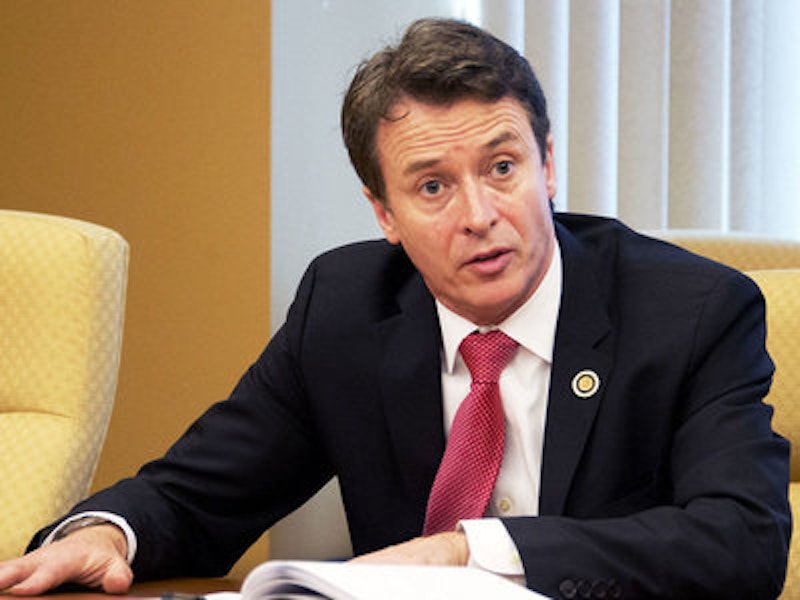 Two student journalists and a faculty adviser at Mount St. Mary’s University have learned their first lesson on the value of freedom of the press. The adviser was fired and the tyro journalists, dismayed by the fuss over doing what they’re taught to do, are being celebrated across the profession as future ferrets if they stick with their career choice. The carnage also claimed a philosophy professor and demotion of the campus provost. As if that weren’t enough, the newly-installed president’s neck is on the chopping block.

And now, the headlines are reversed: the faculty is asking the president to resign and the sacked professors are invited to return to their classrooms, according to reports. Anyone who has no stomach for the presidential campaign should avoid academic politics altogether or risk shredding their diploma.

The Mountain Echo, the student newspaper at Mount St. Mary’s University, is not usually associated with blockbuster coverage let alone exposing the heavy-handed governance of the university’s president, Simon Newman, who, in another era, would summarily expel the student-reporters. Trust me on this one. I was the Mountain Echo’s editor many decades ago, running the paper under the censorial eye of a faculty moderator in the era of rotary dial phones and upright Underwood typewriters. But back then, journalism was not yet a course at the Mount. It was a soft, two-credit elective extra-curricular activity that did not apply toward the 124 classroom credits required for graduation at the end of four years.

The Mount, as it’s known affectionately to thousands of graduates, like its student newspaper, isn’t accustomed to making waves or headlines. The University is, if anything, celebrated for its extreme orthodoxy (Baltimore Archbishop William Lori is a Mount alum.) The nation’s second oldest Catholic college (after Georgetown University) is tucked into a Catoctin Mountainside along Route 15 in antique Emmitsburg, MD, midway between Gettysburg and Frederick. On the opposite side of the mountain is Camp David and inside the belly of the mountain is the underground Pentagon which, campus legend has it, a Mount math professor helped to design.

But recently the Mount did what it normally couldn’t in a way that a university shouldn’t. It made big damaging headlines—the front page of The Baltimore Sun, The Washington Post and The New York Times. The Drudge Report poached the Times’ story to give the explosive academic drama even wider currency. So, exactly what happened at the sedate small university of 2200 which, when it does make headlines, usually address the non-academic subject of its hard-charging basketball teams?

Two student reporters, Rebecca Schisler and Ryan Golden, spent several weeks of pick-and-shovel reporting to discover that Newman, the president, had conceived a brash new kind of Donald Trumpian approach for improving the university’s student retention rate and boosting the Mount’s national standing in the annual U.S. News & World Report college rankings. And like any solid journalists, they double-sourced their findings, a minimum requirement in most newsrooms.

The Mountain Echo’s reportage, as reproduced by many news outlets, had Newman trying advance the idea of culling the student body of struggling freshman and refunding their money only a few weeks into their entry semester. Simply put, Newman’s strategy was: cook the books by getting rid of the deadwood. Here’s the actual, decidedly un-academic language—as reported by the Mountain Echo—that Newman used to make his pitch to a disbelieving professor: “This is hard for you because you think of the students as cuddly bunnies, but you can’t,” Newman is reported as saying. “You just have to drown the bunnies.” Then he added, “Put a Glock to their heads.” (A Glock is a .9mm semi-automatic pistol.) Parents across the Mount’s enrollment demographic must have had flashbacks to the 1987 Michael Douglas movie, Fatal Attraction, wherein the psychotic Glenn Close is boiling the family bunny on the kitchen stove. Maybe the NRA should award Newman an honorary membership.

Founded in 1808, the Mount historically was run by clergymen until the campus turmoil of the 1970s when it was decided that a lay president could relate more effectively to the demands of the students. Almost simultaneously, the Mount’s sister school, St. Joseph’s College, a mile around the Route 15 bend, closed and the all-male Mount became coed. Laymen presidents have run the institution since. Along the way, the Mount adopted a marketing upgrade from college to university and greatly expanded its academic offerings.

It’s important to note that Newman, president for less than a year, is a graduate of Cambridge University and holds an MBA from Stanford. Newman’s background is in finance. He was managing director of JP Capital Partners, a private equity firm, and CEO of Cornerstone Management Group, both in Los Angeles, according to reports. So it’s easy to discern, right up front, that the dictates of the boardroom do not play well in the classroom—especially when burgeoning Woodward and Bernsteins are prowling the campus. Cherry-picking students is not the same as dismantling a corporation and selling off its parts.

Newman, who has no background in education, has admitted to The Washington Post that his language is often profane and shocking. He was quoted as using phrases such as “Catholic jihadists” to characterize a campus clique and of telling an alumni group that “Twenty-five percent of our students are dumb and lazy and I’d like to get rid of them.” Newman has, or had, grandiose plans to double enrollment and modernize the curriculum at the traditional liberal arts university which includes a separate seminary at the far side of the campus.

So far, the wreckage has claimed Thane Naberhaus, a tenured professor of philosophy, who was fired for what was called disloyalty to university policies, and Edward Egan, director of the pre-law program and faculty adviser to the Mountain Echo. David Rehm, a philosophy professor, was demoted from provost but remains on the faculty. (Rehm is the son of celebrated syndicated talk show host and author Diane Rehm. Several years ago, Diane Rehm was invited to speak at the Mount as part of a lecture series. But seminarians studying for the priesthood at the university protested because of her pro-choice views on abortion and the invitation was withdrawn.) Both professors say they want time to consider returning to their jobs.

The story has also created a furor in academic circles as well as among the Mount’s alumni. The American Association of University Professors, as reported, has called for reinstatement of the professors. And a separate petition for reinstatement, circulating on the Internet, has been signed by thousands of professors. The university’s board has backed Newman while a rapidly swelling list of alumni has called for his removal. The faculty voted 84-3 for Newman’s removal.

As for the student journalists? “We were really appalled by it,” Golden was quoted as saying in The New York Times. “He’s [Egan, the adviser] really a good mentor for a lot of students at this school. He’s absolutely encouraged us to pursue journalistic integrity, absolutely encouraged us to be ethical, to be fair, to be thorough, to be objective and to do the best work that we could.” That statement should be framed and posted on every newsroom wall.