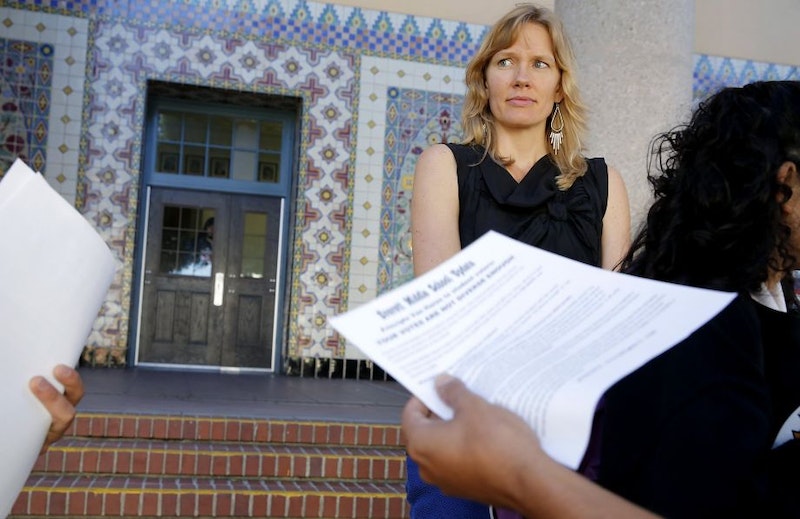 San Francisco's Everett Middle School held a student council election on October 9, but when the results were tallied, the school principal, Lena Van Haren, withheld them. The winners did not reflect the proper amount of diversity, she said, trying to explain why she was invalidating the results of a fair and free election. Students usually get their first opportunity to participate in the democratic process while in middle school, so they must’ve found the principal's actions confusing. They were expecting an American-style election, in which the voters determine the outcome, but they but ended up getting something resembling Cuba.

Van Haren had an idea of what the election results should look like, but her students disappointed her—they didn't share her vision. That her first instinct was to tamper with the election should come as no shock to anyone who’s paid attention to the behavior of the left-wing proponents of diversity. Basic rights often take a back seat to zealots on the left when they violate a pet cause.

The principal's quotes in the wake of the election provide insight into her views on education and the core principles of democracy. Here are a few, along with a translation of what they really mean:

Quote: "It's not okay for a school that is really, really diverse to have the student representatives majority white."

Translation: "It's not okay because I say it's not okay. The students haven't yet learned that they should vote for a candidate based on their skin color or ethnicity. I’m here to help them understand this."

Quote: "The easy thing would have been to announce the results and move on. I intentionally did not choose the easy way because this is so important."

Translation: "I am a brave educator because I use my judgment to decide whether the results of a fair election are valid. I leave it to the weak and morally suspect to accept election results at face value."

Quote: “We paused to have a conversation. I never, ever said we wouldn’t share the results or they weren’t good enough."

Translation: "These kids voted for the wrong people, unaware that diversity is the crucial aspect of an election, but then the parents and students called me out, so I released the results."

Quote: "This is middle school. It’s not a presidential election. It was not about hurting democracy or putting diversity over democracy.”

Translation: "As an educator, it’s not my job to instill in students such cornerstones of American democracy as the sanctity of elections. Someone else will have to teach them these things."

Quote: “This is complex. I truly believe it behooves us to be thoughtful about our next steps here so that we can have a diverse student council that is truly representative of all voices at Everett.”

Translation: "Even though the election was conducted in homerooms to insure all the students voted, their votes were not correct, and must be voided. For some reason, Everett students are not as obsessed with race as I am."

Van Haren tipped her hand with these quotes, and it’s no surprise that many parents and students were up in arms, even in progressive San Francisco. She claimed she wanted to wait to release the election results until there was a plan—created with student input—to increase diversity among student leaders, perhaps by adding positions. Wrong. You release the results first and then take those measures, if they are, in fact, even necessary.

Seventh-grader Sebastian Kaplan, who waited over a week to see if he’d won, offered more clarity on the issue than his principal, telling KRON 4, "The whole school voted for those people, so it is not like people rigged the game. But in a way, now it is kinda being rigged."

The Everett school controversy illustrates how the social justice movement on the left feels about tampering with long-accepted principles of a free society in order to further their own agenda. This movement also treats the concept of free speech as cavalierly as Van Haren treated free elections at her school. If they had their way, your speech options would be far from what the Founding Fathers had in mind.

Van Haren, after finally releasing the election results, finally admitted she didn't handle the situation well. She went on to declare that it could still be a "teachable moment." I hope (but doubt) she means for herself, because it's too late for her students to take away many positives now. The rights some of us, as Americans, have long taken for granted are not held in high regard by everyone. All these people you hear about who have "good intentions."