Privileged student demands a sense of comfort from her college. 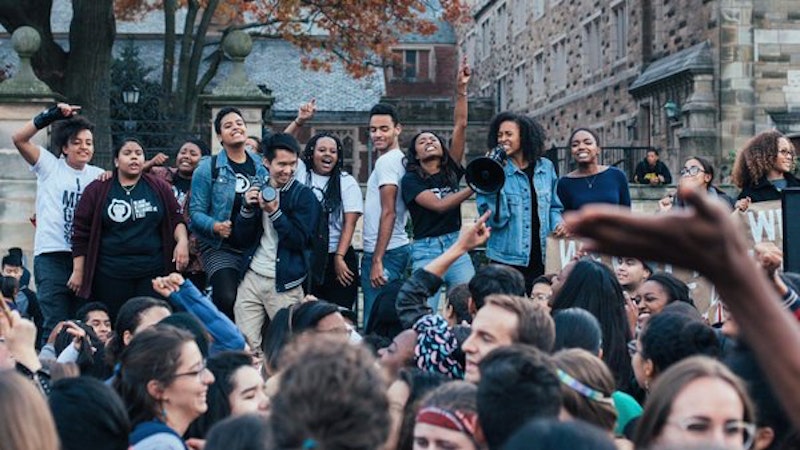 If you want an example of today's coddled youth, watch the video of the Yale student berating Silliman College master Nicholas Christakis. The video, which had 737,000 views by November 10, is a PR disaster for the modern movement fixated on micro-aggressions and safe spaces for students. As for the female student it featured—now referred to as Shrieking Girl—it will be a tough lesson on what happens when your childish, abusive temper tantrum goes viral. I wouldn’t want to be in her shoes now.

Christakis, a professor and physician, was named to Time's list of the 100 most influential people in the world in 2009. His wife, Erika, is associate master at Silliman College, and it was her email pushing back at the school administration's attempt to set a politically correct tone for this year's Halloween outfits that sparked all the outrage on the Yale campus.

Christakis defended his wife, and some students were so enraged they called for their firings. Attempting to defuse the situation, Mr. Christakis met with a group of minority students on a campus lawn, where the video was filmed. He tried to explain that other people have rights too, but Shrieking Girl bellowed, "Be quiet!" She goes on to lecture him that's it's his job to provide a sense of comfort and home to his students. Christakis politely responds that he doesn't agree with her assertion, and she screams, "Then why the fuck did you take the job then? Who the fuck hired you?"

She continues screaming at him, finishing with, "You're disgusting!" and then stalked away without letting the professor even make a point. How do you arrive at the opinion that a school administrator is supposed to make a "home" for students where they can always feel safe? Having come to Yale, they are no longer in their homes. Leaving that comfort and safety has its plusses and minuses. One of the minuses is that you'll be exposed to things you may not like, which is going to happen anyway after graduation. That’s what education is for: preparation for the future.

I assume the video’s angry student hasn’t read Yale's Freedom of Expression statement. "Among the College’s most cherished principles is its commitment to freedom of expression," it states right in the first paragraph, and then goes on the express the need to "think the unthinkable, discuss the unmentionable, and challenge the unchallengeable.” It explains what students can expect at the university, as in "Yale’s commitment to freedom of expression means that when you agree to matriculate, you join a community where the provocative, the disturbing, and the unorthodox must be tolerated."

Watching this video you hope the student was just having a very bad day, but it’s hard to escape the suspicion that her bizarre overreaction was manifestation (granted an extreme one) of the unreal sense of entitlement some young people have. One wonders if Erika Christakis’ concern over the initial email sent out by Yale administrators sprang from the silliness she saw in the costume guidelines. For example, students should avoid dressing up as someone who died recently, such as Amy Winehouse. Why? I'm a Winehouse fan, but this isn’t offensive. Sombreros are discouraged too because "costumes are not cultures."

Shrieking Girl is scrambling to erase her social media presence now. It's odd that she asked Christakis "Who the fuck hired you?" when she was on the search committee for his hiring. She comes from the wealthy town of Fairfield, CT, and now attends one of the world's elite universities, but still feels oppressed. Students demanding safe spaces will always feel oppressed in some way, especially if those in charge indulge their whims.