Keep Your Unimmunized Kids Out of My Kid’s Public School

No parent’s child should be put at risk because of another parent’s choice. 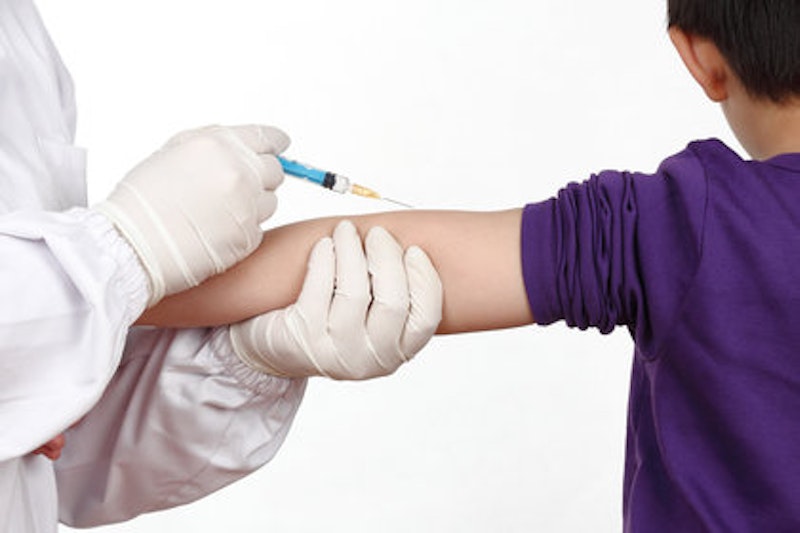 When my daughter was a newborn, a family member was coming to visit. This couple had chosen never to immunize their child (then two years old). I wondered what this could potentially mean for mine. I spoke with the pediatrician, an older gentleman who said, “Anyone who wouldn’t immunize their child against polio has never seen a child die of polio.” After paralyzing and killing tens of thousands of children, polio vaccines began being administered in 1955, and the disease was eradicated in 1979, not before he’d experienced some of those deaths. He also informed me that the two-year-old relative could pick up whooping cough in a McDonald’s and, before being diagnosed, pass it to my newborn, who could die from it.

That was all I needed to know. I didn’t want the kid around my baby until she’d been immunized. Period. It caused family arguments: why was I “making an issue” out of it; things were awkward for family gatherings. I gave the same answer then as the opinion I have now with recent news reports of the measles outbreak. I don’t care how you raise your kid. I don’t judge or criticize or waste time or energy forming an opinion about you right up until the point where your decisions affect my kid.

I agree with Hillary Clinton’s tweeted dig at the fumbled comments on the topic by GOP presidential hopefuls Chris Christie and Rand Paul: "The science is clear: The earth is round, the sky is blue, and #vaccineswork. Let's protect all our kids."

Retired pediatric neurosurgeon and novelty GOP candidate Ben Carson was less wishy-washy with his comments than Christie and Paul: "Although I strongly believe in individual rights and the rights of parents to raise their children as they see fit, I also recognize that public health and public safety are extremely important in our society,” Carson told The Hill, adding, “Certain communicable diseases have been largely eradicated by immunization policies in this country and we should not allow those diseases to return by foregoing safe immunization programs, for philosophical, religious or other reasons when we have the means to eradicate them.”

No mother, least of all one with a child suffering from cancer, should have to worry about her child dying because of the decision of another parent. It’s that simple. The solution is simple as well. While no state or government should legislate immunizations and force parents to make the choice if they don’t want to, public schools are the place where the line should be drawn. Of course children have rights to education in our country, but the right is also a privilege and shouldn’t put other children in danger.

Private schools and daycares that don’t receive federal funds can do what they want, but public schools have been lax with the immunization requirements given the trend in parents’ concerns about potential harm. Parents today can check a box that says their kid hasn’t been immunized because of “personal beliefs.” Guess what? I don’t care what your personal beliefs are as long as you don’t bring them to my backyard, home and kids. Kids who are in schools with other kids should be immunized, and though the government can’t give out shots, they do provide federal funding for education, so they can make policy when public health and safety are involved. While Congress can’t pass a law requiring immunizations, they can pass a law (there are no Federal immunization laws now; the states each have differing requirements) requiring that children entering public school must be immunized.

If you want to put your kids at risk by not immunizing them against the world’s most communicable diseases, most of which have been eradicated because of immunizations, be my guest. But don’t put my kid at risk.