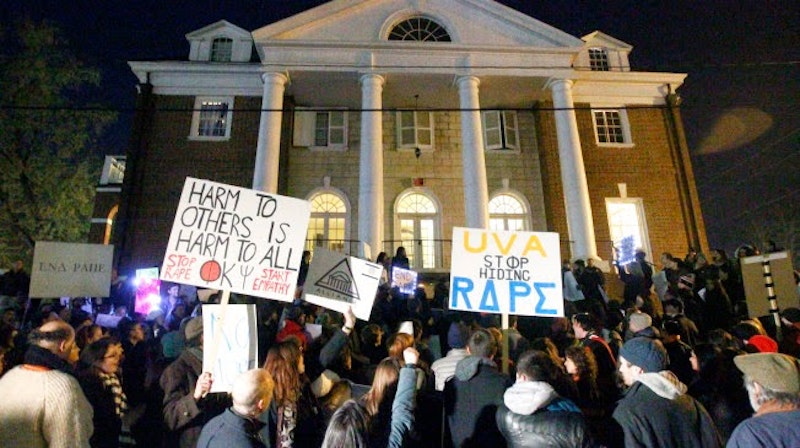 Another journalistic institution has fouled up in the mess regarding an alleged gang rape at the University of Virginia. The Washington Post is the latest culprit. That's the same newspaper that shredded much of the rape story after Rolling Stone published an account of the business. Post reporters did a fine job of talking to the sources that Rolling Stone should have talked to. But it also revealed that the Rolling Stone article used the real first name of the girl who said she was attacked.

By now nobody expects much of Sabrina Rubin Erdely, author of the RS article. Yes, she might use a possible rape victim's real first name, and she might then tell the Post she had done so. But the Post didn't have to tell us what she had said. Like just about every media outlet in the civilized world, the Post is dead set against giving the public the real name of a person who says they have been sexually attacked. Just ask Caitlin Dewey, a Post blogger on Internet issues. “We are not linking to these posts, as it is Washington Post policy not to name victims or alleged victims of rape.”

Wait, what posts? Well, not every media outlet belongs in the civilized world. One fellow has developed a vendetta against the girl at the center of the UVA story. He has a website; thanks to Erdely and the Post, he also has the girl's first name. Thanks to the Internet and publicly available records, he has her last name too, plus her picture and her old high school and the names of her brothers. And he's posted all these things online. (No, I’m not going to link either.)

There may be something that keeps some nut from getting a gun, tracking the girl down and killing her. I don't know what. Maybe she'll get police protection and the police won't screw up as badly as Rolling Stone and the Post. She can hope. This case started out serious and is rapidly becoming grim, not to say dire. There is now a real chance of blood, and it traces back directly to the foolishness of the people entrusted with bringing Jackie's story to the public.

Various Post reporters have been writing up their thoughts on how the UVA case shows the value of fair-minded journalism and the rigorous pursuit of fact. These reporters include Paul Farhi, the man who confirmed that the girl's pseudonym was no pseudonym. The paper's coverage of UVA does appear solid when judged by the standards of simple truth-finding, and those standards count enormously. But nobody seems to have thought about the girl and what could happen to her.

Rolling Stone and Erdely wanted their corker of a story, and they ran with it even after the girl asked them not to. Farhi and the Post wanted... well, not very much at all. What Erdely had said about the girl's name was noted only as an aside. Taking it out would’ve made no difference to anything except the girl's accessibility to harassers and potential assassins. Nobody at the Post took the four or five seconds necessary to realize that identifying her first name as such would hand her whole name over to anybody who wanted it. And none of them seem to think that their paper's part in blowing her cover deserves a mention. Not Caitlin Dewey when she wrote her column on the man with the nasty website. Not Terrence McCoy when he profiled the man. Not Paul Farhi either. Let's hope events don't cause them to take a second look.