A message for assault victims and magazine readers. 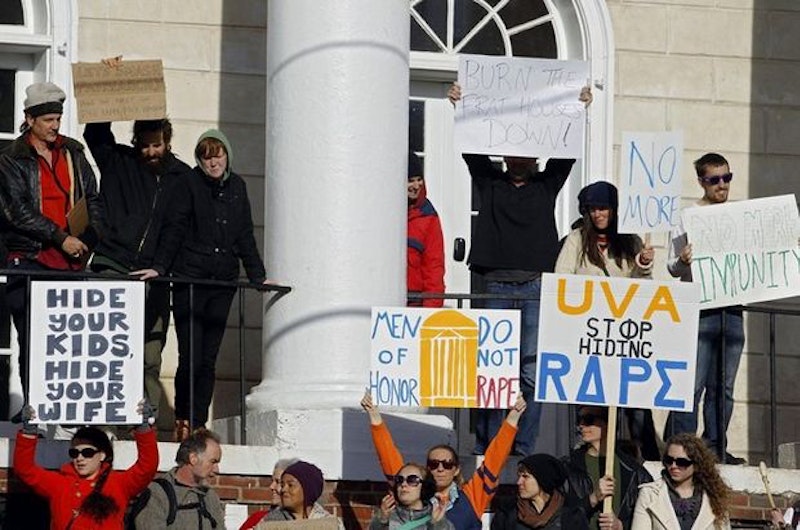 Rolling Stone's story about an alleged gang rape at the University of Virginia has become a heaving mess. That's mainly because The Washington Post has done the things that the magazine did not, such as interview the alleged attackers and people close to the girl who reported being raped. After a series of non-corroborating details emerged, Rolling Stone issued a statement on Friday saying it had lost confidence in the girl (“our trust in her was misplaced”). Over the weekend, the magazine replaced that sentiment with a passage saying the magazine and not the girl was at fault. No mention of the previous version's rather chilly treatment of Jackie (the pseudonym the article gives the young woman).

The backpedaling doesn't mean there was no attack. The Post reports that Jackie's friends, the same people who now doubt the details of her story, still believe she was traumatized in some way. But if an attack happened, it was not the attack described by the magazine. And what a spectacular business that was: a shattered glass table, a pitch-black room, a boy snarling, “Grab its motherfucking leg.” It seems that the article's reporter, Sabrina Rubin Erdely, was determined to keep the incident as Exhibit A for her piece on campus rape. Erdely has been telling us that her story didn't name the alleged perps because the emotionally ravaged Jackie had asked her not to. In fact, Erdely wouldn't even say if she knows the names herself, again for the same reason. “I can't answer that,” she told the Post. “This was a topic that made Jackie extremely uncomfortable.” The newspaper adds a twist. Contacted by its reporter, Jackie said she had asked Erdely to take the gang rape story out of the article because publication would be too upsetting. Erdely's alleged response was, in effect, no dice.

Another point. The Rolling Stone article named the fraternity where the attack was supposed to have happened, and it included Jackie's claim that the rapists referred to the attack as a regular initiation rite of the house. (“Don't you want to be a brother?” “We all had to do it, so you do, too.”) By doing this, the article made every member of the frat an accused rapist. You or I may be quite certain that rapes do happen at frat houses. We may feel strongly that rich frat boys tend to be arrogant clowns and should be kept out of sight. It could be that whatever happened to Jackie did involve members of the fraternity named in the article, and that some of the boys are rapists or rape abettors. But maybe it didn't and maybe they aren't. Right now there's a roster of easily identifiable people who have all been tagged as rapists because a magazine reporter wanted to give her story a kickass opening.