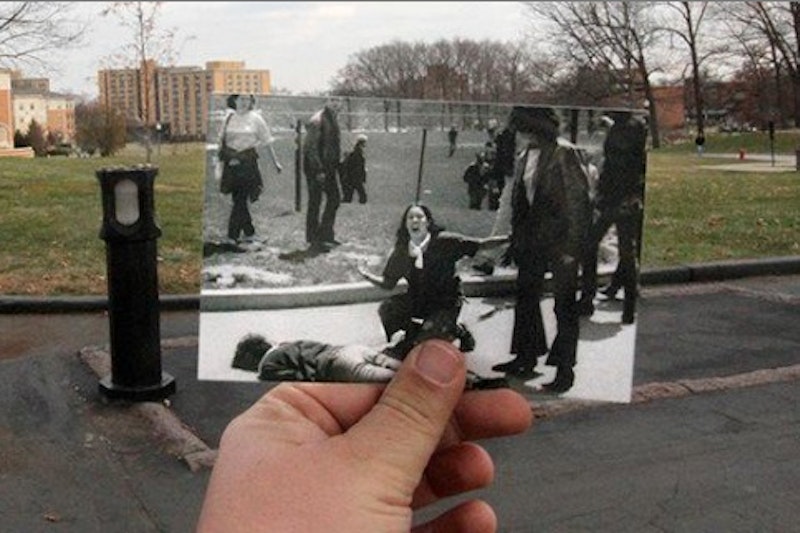 The pretense that liberal protestors are the nice, civil ones gets harder to maintain with each incident like this obese, monstrous feminist trying, like a giant shrieking baby, to shout down speeches by conservatives she dislikes. Her triggered state led to her being nicknamed “Triggly Puff” by an awed Internet. Before you say it’s tragic the way the culture marginalizes her, as if it’s only her appearance to which the world is reacting with horror, note that she lectures on these topics and may have access to better audiovisual equipment than I do. Resistance to Triggly Puff is resistance to power and bullying.

There are (metaphorically speaking) bigger bullies on campus than her, though, and last year’s most notorious may have been Mizzou’s villainous (and soon viral) Prof. Click. She called for “muscle” to oust an unwanted reporter on campus. The real evidence that this leftist was a whiner all along, though—and thus in good company on the left—is that the moment she was fired by Mizzou, she changed her tune from complaining about the place’s oppression of blacks to complaining that the institution targeted her for firing because she is white and thus, presumably, easy to axe without a controversy or an EEOC lawsuit. And just like that Click becomes Anti-Click. Whatever’s tactically useful at the moment shall be asserted. Such is leftist thinking.

At the psychosis-factory that was my undergrad home, Brown University, students recently protested against the singing of a Hindu song by a white woman (despite there being white people in India and within Hinduism)—all part of the left’s apparent ongoing effort to compete with Aryan Nations and other white supremacist groups in the field of “preventing race-mixing and culture-blending.” Awful. Embarrassing. Limiting.

The student who could use a real “trigger warning,” though, is not the hypersensitive ninny mentioned above but rather anyone brave enough to stand up against (not initiate) real violence. Tomorrow is the 46th anniversary of the Kent State shootings, when soldiers of the U.S. government killed four students, two of whom were not even involved in the anti-war protests the National Guardsmen were attempting to break up, and one of whom was in fact enrolled in ROTC. As Time magazine put it, “triggers were not pulled accidentally at Kent State.” Those who want to fight oppression should stay focused on the real enemy—government—instead of childishly imitating it by pretending to be etiquette soldiers and language cops.