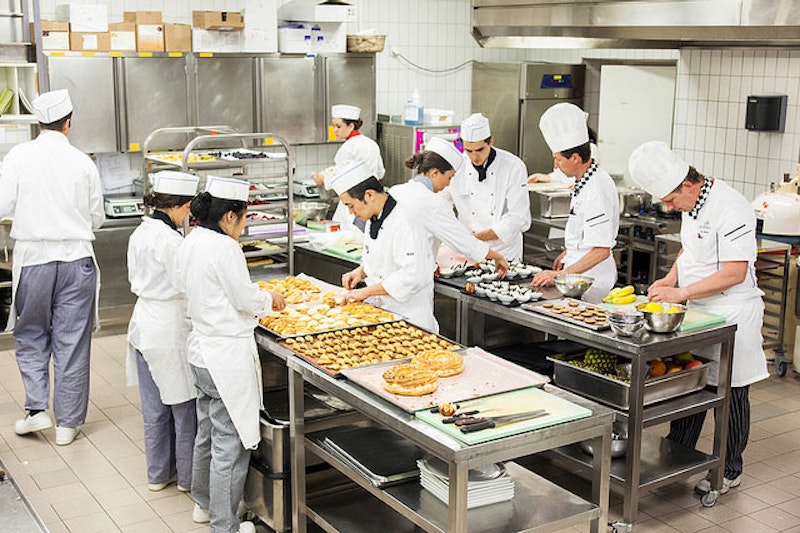 You just watched another season of Top Chef. You're sick of your dull desk job, love food and cooking, so you check out some culinary schools in the area. They're expensive. According to a study done by Eater, the average tuition at 10 of most popular American culinary programs is 300 percent higher than standard four-year public universities. You're determined to make this your new career, so you decide to enroll at a place where you'll graduate $40,000 in debt. You've just made the worst mistake of your life.

You're going to graduate and move to a job as a line cook paying around $10 per hour. Once I decided I was going to be a chef, so I took jobs at the only places that would hire me—T.G.I. Friday's and Uno Pizzeria. Then I moved to Maui and got a job at Wolfgang Puck's Spago, in the Four Seasons, as a dishwasher. After about two months of hard work, the chef made me a line cook. This is the exact same job you will get when you come out of culinary school.

The truth is that culinary schools are an outright scam. These schools will accept just about anyone, as diploma factories tend to do, but they don't prepare you for the reality of long hours in a hot kitchen filled with testosterone-crazed societal misfits.

You might pick up some nice techniques in your culinary school—although the classical cooking so often taught there doesn't reflect modern culinary trends—but one thing you won't get is what you need most, the ability to cook under pressure in the brutal environment of the kitchen. You'll learn if you have that when you get that first line cook job, and if you don't have it, your career options will quickly disappear. I saw one recent culinary school graduate completely break down on the line one night at Spago. He was messing up every other order on a busy night, and the tickets were backing up. The chef finally went off on him, and he replied, "My mind doesn't work that way."

The numbers are catching up with culinary academies now. In December, Le Cordon Bleu announced it would close all its schools. The federal government is cutting off financial aid to schools putting students in debt to take low-paying jobs. Schools like Le Cordon Bleu are charging law school prices to prepare gullible, or unserious, students for blue-collar jobs. Many of these places are full of rich kids who want to be a chef because it sounds fun.

Another culinary school grad who came into our kitchen—we called her J.J.—arrived with no knife skills. She'd cut herself every week. J.J. took a part-time job at a cheese shop and cut herself there too, and badly. They bandaged her hand up such that her thumb protruded from her hand at a 90° angle. Joss, an excellent line cook who'd worked his way up from dishwasher, would mention a movie and taunt her by asking, "Thumbs up?" J.J. hated that, and she also hated it when he'd mock her when she got demoted to dishwasher, telling her she'd paid $40,000 to get that job, while he was a cook.

Joss was brutal but he was right. That's exactly what she'd paid for, and it was certain from the beginning she'd have someone like Joss in any kitchen she ended up in. She couldn't use a knife, which is like a carpenter not being able to use a hammer, and couldn't cook under pressure, despite her expensive culinary certificate.

These kids think they'll skip to the head of the pack with their degree, because they've been told that, but they won't. Culinary schools know how to play into fantasies but they don't even give them the basic skills necessary for a low-level kitchen job. The $40,000 debt figure I cite is just one of many. I've heard as high as $75,000. Try to imagine paying that back with blue-collar wages.