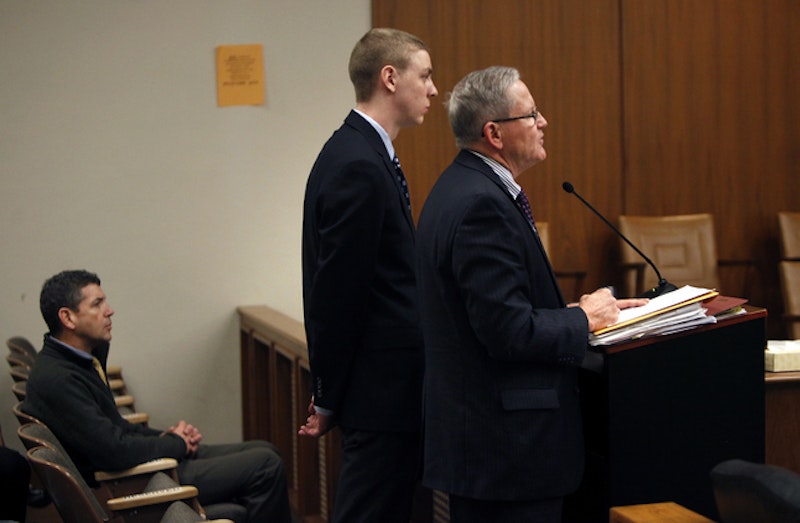 Brock Turner is a poor excuse for a human being and a criminal. The "Stanford swimmer," as the media’s dubbed him, sexually assaulted an unconscious woman on the university campus in January, and received just a six-month sentence and three years probation. His father is an appalling individual too, it seems. In a statement to the judge, he said that his son shouldn’t go to jail because he'd already paid "a steep price... for 20 minutes of action." No, it wasn't "action," as the victim explicitly spelled out in a descriptive, heartbreaking letter she wrote to Turner.

The sentence clearly is too short. I don’t casually use the term "white privilege," but that's what this looks like. Clean-cut white preppy hires an expensive lawyer and works the legal system. I can’t imagine a black guy getting such treatment. On the other hand, locking someone up is not the only way to punish a person. Turner’s now nationally infamous as a rapist, he's withdrawn from Stanford, and has to register as a sex offender for the rest of his life. In effect, he received a life sentence of being stigmatized, which is no minor matter.

There's been a lot of understandable rage expressed on social media about Turner's light sentence. There's much talk of "rape culture" and "white privilege." Some say that white males can get away with anything on college campuses—that receiving a light punishment is the norm.

In fact, the Brock Turner case is more of an anomaly. Yes, this white guy caught a break in getting a particular judge, but many aren’t so lucky. Owing to the alarmist way the government now interprets the Title IX law, due in large part to panic induced by fake statistics like "one in five college women are sexually assaulted," school administrators are now required to give sexual assault accusers the choice of not going to police. In such a case, schools adjudicate a potential felony on their own, a task they're unequipped to handle. The result is that their kangaroo courts, which have no forensics evidence to rely on, nor due process of the law offered to the accused, often render guilty verdicts against innocent students.

The advocates for such a system are claiming "compassion," arguing that significantly lower evidentiary standards for a guilty verdict by a campus tribunal offer more "justice" than the standard legal procedure. In this shadow legal system that the Obama administration has created, only a "preponderance of evidence" is required for a guilty ruling. Schools are threatened with legal action if they allow the accused to cross-examine the accuser, who is allowed to appeal a finding of not guilty. It's the legal system of authoritarianism.

That schools charged with policing their students' sex lives have failed miserably is hardly a shock. They're dealing with "he said, she said" situations where what she said carries much more weight. They're also dealing with cases where the woman feels regret over a sexual encounter where perhaps she had gotten drunk with a fellow student and decides, months later, that she was assaulted.

The solution to this inequitable process of "justice" is probably going to be lawsuit after lawsuit by students falsely accused and expelled. It affects earning potential, meaning that when they lose the schools could potentially be paying out big bucks. Money’s king, so at that point colleges will begin pushing back with lawsuits of their own against the government.

The student lawsuits are coming now. Last October, after a male student filed a lawsuit against UC-San Diego after being suspended as soon as a female student accused him of sexual assault (falsely, he says), a court ruled that the school's tribunal had been unfair, as the accused was prevented from introducing text messages with his accuser into evidence, and wasn’t allowed to challenge the investigator.

After this watershed legal ruling, similar lawsuits have been pouring in against justice-denying colleges. Why couldn’t Obama's lawyers envision such a scenario? They thought they'd enact a private justice system for the privileged and that it was going to operate comfortably within the U.S. legal system? The GOP has not been very effective in blunting yet another Obama assault on the Constitution, perhaps fearing another "War on Women" headline. That's their own fault, to a great degree, but they're getting railroaded.

The current campus sexual assault adjudication procedure would work perfectly if all claims of sexual assault were true. Unfortunately, this isn’t true. This system actually encourages false sexual assault allegations. It's an un-American process that denies essential American rights to the accused. Under it, it’d be advisable for college men to date only "townies" to avoid the fate of the campus kangaroo courts. Obama was a constitutional scholar, but he often has little regard for the actual Constitution. Campus kangaroo courts have no place in a country claiming to value justice. The backlash is on its way.