Why I Left the Beatles 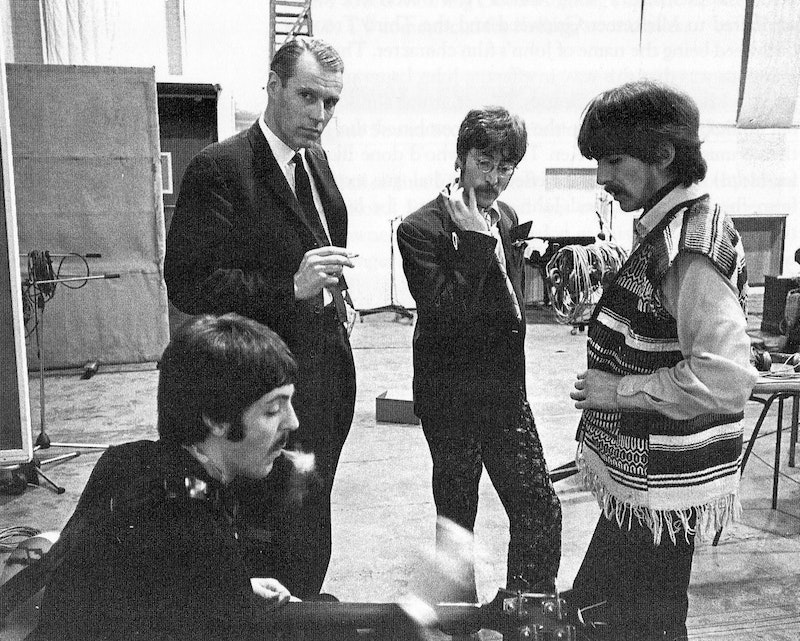 “‘Beatles do this,’” I mimic bitterly. “‘Beatles do that. Beatle Colin play on half beat.’ How about Beatle Yoko imitate a tree stump?”

John stirs, sits upright. “Col,” he says, “I swear to God, watch that fookin‘ mouth or—”

“You’re on heroin, nitwit. You want to hit me? I’d have to pick you up and carry you into position. Okay? Then maybe you could try something. If the smell from your armpit didn’t kill you. Yeah,” I say, warming to my theme, “I want to see you try. I just don’t want to smell you."

John can’t quite get to his feet. “You’re a pig, May,” he says. “You’re an animal. You aren’t fit to be in the same room as Yoko. She’s a sensitive artist. She’s turning the world on. She’s introducing a whole new way of seeing. She—”

“Your girlfriend is shrubbery. You notice that? Real strong resemblance. Also, and here’s a point I want to stress, you don’t have a beard. Your ‘beard’ is just skin disease by other means. Ringo has a beard.”

“Thanks, mate,” says Ringo from behind his drum kit. As always, he wants to be liked.

“Ringo has a beard,” I forge on. “You’ve got inflamed mattress stuffing. You’ve got a three-foot itch. You’ve got Tarzan’s butt hair growing from your nose.”

John still can’t get to his feet. His face is white from heroin and his boiling rage. Yoko, that dark-haired stub, has wedged herself beneath his arm and is trying to lever him up. I note that her face is twisted, mouth and nostrils squeezed shut. Lennon’s armpit is no place to be.

“Here, here, here.” A hand brushes my elbow and I whirl. It’s Paul, of course, the diplomat. “No need for fussin‘,” he says, and with his accent it sounds like “fur foosin.” I really can’t stand that. “The music’s what it’s about,” he says. “It’s all just a sing-song, when you coom down to it.”

His brown eyes are opened wide; they project guileless sunbeams. “You, me, Ringo, John,” he says. “Even old George Martin, there in the control booth. We’re all just tryin‘ to give the folks a bit oove the la-la-la. A bit oove the dee-dee-dee. Y’know. Coom on, Colin, what do you say, give that guitar a strum. We’ll lay down a track that makes their eyes dance. We’ll—”

“You know,” I say, “when you talk? You sound like an elf farting through a slide whistle. A crooked elf that nobody trusts. And also, Apple sucks. I really hate Apple.”

“Gentlemen,” a voice crackles. George Martin has turned on the intercom. “Gentlemen, need I remind you that presently we’re at take 237. Perhaps it’s time to summon our energies and address the matter at hand.”

“Coom now,” Paul says to me. “Everybody digs Apple. They know it’s a beautiful trip.” Over his shoulder: “Ringo, you dig Apple.”

“It’s a gas,” Paul says. “It’s loov by means of currency. It’s communism with a smile. It’s a rainbow but with office space and a drinks budget.” Only he says “boo-jit.”

“It’s taking my money!” I say. “I want my money and you’re giving it to macrobiotic puppet theaters that throw the I Ching!”

But now John and Yoko are upon me. “You’ve had this coming, Colin,” John says. His fist is cocked. Within a matter of minutes, it may be able to reach my chin. Yoko, face clenched, continues to support him.

Another honking laugh. It’s Paul. “Goo‘ one,” he says.

I straighten up. “Four years at Sarah Lawrence,” I tell the room. “What did she major in—Gnomic Stupidity? Avant-Garde Pissiness? Opaque Manifes—”

There’s a muttered “Cor” and the sound of a body crumpling to the ground. John. She’s dropped him.

The intercom: “Colin, watch out!” I’ve been careless. Tackled at the knees, I drop like a sack. Yoko Ono’s currant-like eyes glare into mine. Hair like dark Brillo hides the light. Then her fists descend. Her teeth bite deep. Her thumbs gouge.

And that’s why I left the Beatles.