The Early Days of DIY 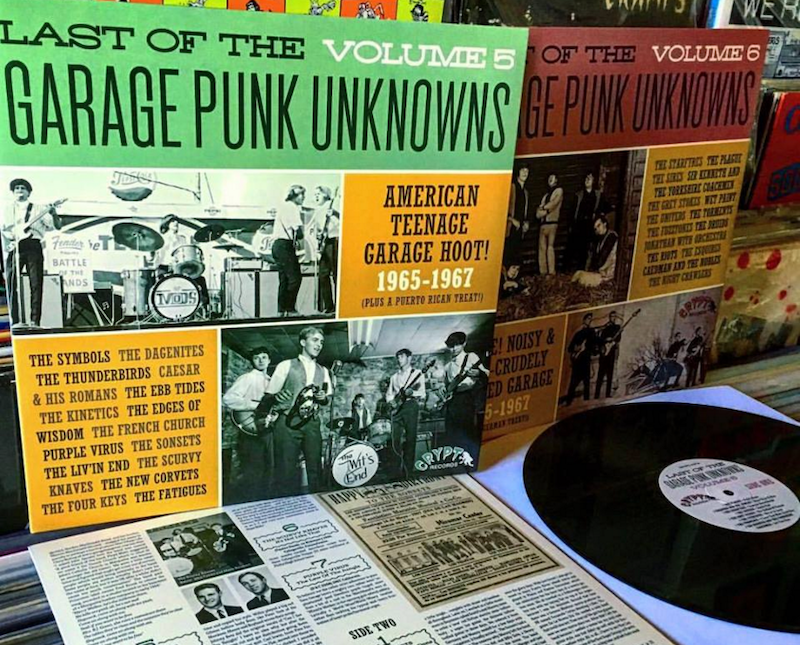 Surface noise, compression, tape hiss, distortion, and other low fidelity elements are common on early sound recordings, but these defects became rare in the '60s when massive multi-channel mixers and multi-track tape machines became de rigueur at professional studios. As the pop world's standard issue high fidelity emerged there just weren't enough big record labels to issue high quality recordings for every aspiring artist out there. Soon enough enthusiastic music fans and small time producers began making records for the non-entities, amateurs, and square pegs who'd been ignored. These recordings were usually created on shoestring budgets by people with little to no background in audio engineering. Thus low fidelity became synonymous with the DIY ethos and non-conforming artists of all shapes and sizes.

In 2015 Crypt Records began reissuing mega-rare early DIY pop-rock releases on the Last of the Garage Punk Unknowns compilations. Volumes 6, 7, and 8 of Last of the GPU feature many vintage recordings which predicted the lo-fi tropes that have become important elements in today's music.

Last of the Garage Punk Unknowns 6 is an insane adventure into the dankest, crustiest reaches of lo-fi infamy: a hypnotic pattern of noise damage illuminates the riff-driven punk psychosis of Wet Paint and Caedman and the Nobles. Their two tracks seem to have been captured by producers who set up the microphones right next to great piles of sizzling bacon (though in reality that sizzle probably came as a result of a cheap styrene pressing or unprofessional handling of analogue master recordings).

Heavy fuzz distortion has long been a punk hallmark, but this distinctive effect is usually reserved for guitars. Thanks to some blessed miracle/mistake "Set Me Free" by Sir Kenneth & the Yorkshire Coachmen features a crushing blast of fuzzed tambourine, an unholy clatter that would be more at home on a Death Grips album or a European IDM track. This jittery chaos stands in stark contrast to the song's lumbering dirge-punk structure. Speaking of fuzz, high energy tracks by The Plague and Tennessee's appropriately named Fuzztones burn with intensity drenched in a level of distortion so thick that their chord changes and melodies are constantly on the verge of dissappearance.

The tragic, maudlin side of early DIY music is the focus of Last of the GPU 7 and 8, and the lo-fi contingent makes awesome cameos on both records. The most notable of these is "Tryin' to Come Back", the lone release by a mysterious West Vriginia crew called The Plastic Menagerie. "Tryin'..." is infused with the strange melancholy often heard in work by today's finest bedroom pop singer-songwriters. Its awkward emotional rawness is only magnified by the distortion, which sounds like it was recorded with one overdriven microphone placed directly above a cymbal bell. Softly strummed guitars, funereal organ, weepy vocals, and even the sound of a full drum kit barely bleed through that cymbal's white noise onslaught.

Though few other tracks from the collections match The Plastic Menagerie's noise level, plenty of other songs match their low key minimalism —"She's On My Mind" by The Last Image, "Dark Side" by Chicago band The Other Side, "Orphan" by Valhalla, NY's Mystics, and other cuts from 7 and 8 would fit perfectly in a mix with artists like Girlpool, Frankie Cosmos, and 100%.

Numerous other connections between DIY's past and present can be found on Last of the GPU 7 and 8: folk punk anthems by Nomads and Swiss band The White Angels both present a futuristic folk context in which slashing chords and layers of distortion symbolize complex sentiments of introspection and nostalgia thus predicting the poetic diy indie/folk rock of Guided By Voices and singer-songwriters like Phil Elverum (Mt. Eerie, The Microphones), Courtney Barnett, and Jeff Mangum (Neutral Milk Hotel).

Low fidelity's cultural significance is a distinct bi-product of the late 20th century's DIY scene. More recently, this milieu has been instrumental in defining the role of damaged sound as an effect that adds texture and mood to recordings, particularly in those created by today's more adventurous electronic musicians and producers. Last of the Garage Punk Unknowns shines a glorious spotlight on the humble origins of contemporary pop's obsession with the lo-fi approach as both a dynamic production element and a DIY artist's badge of honor.