Don’t Lay Down and Die 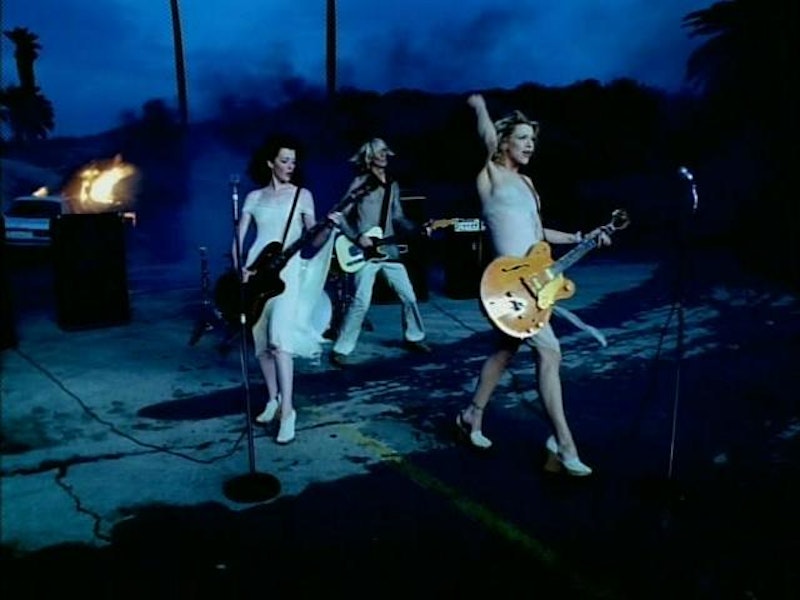 There’s a lot that I’d like to see in this world. Relative domestic political normalcy, world peace, a winning lottery ticket, and a new Bret Easton Ellis novel. Failing that, could we get a documentary on the video for Hole’s “Malibu,” or even just an oral history? It’s a big ask, yes, but I’ve got so many questions. Answers probably aren’t forthcoming; the particulars are likely lost of history. So we’re stuck with this gorgeous, almost panderingly photogenic music video—this delectable car crash—streaming online forever, and we’re left to speculate.

First, a few words about “Malibu” the song. Recently I declared it “Hole’s last great single” somewhere on Facebook. Upon reflection, I was incorrect; this is Hole’s best song ever, to include anything any iteration of Hole may happen to actualize at any future time. Hole will never be better than they were for those three minutes and 50 seconds. Go ahead, I dare you: listen to “Malibu” just once, now.  You cannot. You will need to hear it multiple times, in a way that you will not need to revisit anything Hole has done.

Any darkness limning “Malibu” lurks at the bright margins of its crystalline, sun-kissed melody, phoenix-rising-from-the-ashes lite. “Malibu” sounds eternals, triumphant, hopeful, context independent. Sure, “Malibu” is not beholden to the 1990s, even if—trigger warning—“Come on, be alive again/don’t lay down and die,” which scans as clichéd common sense in 2017, automatically carries a different meaning for anyone sentient in 1994 who made it out of that year alive.

Back to the video. Michael Mann’s Heat famously features at least 80 different locations; by my count, “Malibu” makes use of a good 10 or 12. In some attic or basement or warehouse in L.A. sits a small mountain of reels containing the guts of the short film this video initially wanted to be. But since video’s Imperial Era was all but over 1998, director Paul Hunter and his cast made do with rioting smash-cut non-sequiturs deployed with a kicky panache.

Credit to Hunter; the “Malibu” video makes being a member of Hole seem almost as fun as playing bass for The Archies.

A few natural focal points were available to the camera: Melissa Auf Der Auer’s warm smile and shoulders, Eric Erlandson's punk-rock glowering in active combat with his laconicism, Courtney Love’s weird performative hand gestures, translucent frocks, and piercing blue eyes that seem to trail viewers around the room. (That barely-seen drummer? That isn’t dismissed Hole drummer Patty Schemel, or the session drummer producer Michael Beinhorn drafted to play on Celebrity Skin.) The band is magnetic, performing at the center of an abandoned Los Angeles intersection at night for an audience that didn’t know it was supposed to show up; periodically, crashed, flaming cars materialize around them, a metaphor for Love’s public persona.

Elsewhere subplot strands flap and flutter, hints at what might have been a larger project: Auf Der Auer draped over a large sea rock, Erlandson’s surfing routine, Hole communing with Chicano car culture, some bizarre Baywatch scenario where Love leads a cadre of lifeguards cradling baby dolls towards the ocean. I mean, this is a video where Love plays the guitar atop a pickup truck in front of a mural of L.A. at night, where said mural is later fed to flames, where she sways around in a trailer park. This is a video where palm trees burn and first responders force their way into an abandoned car. “Malibu” is a baffling, impressionistic (and probably insanely expensive) video; depending on the nature of what had to be cut, it might have been an amazing film.