A devoted fan on the defensive. 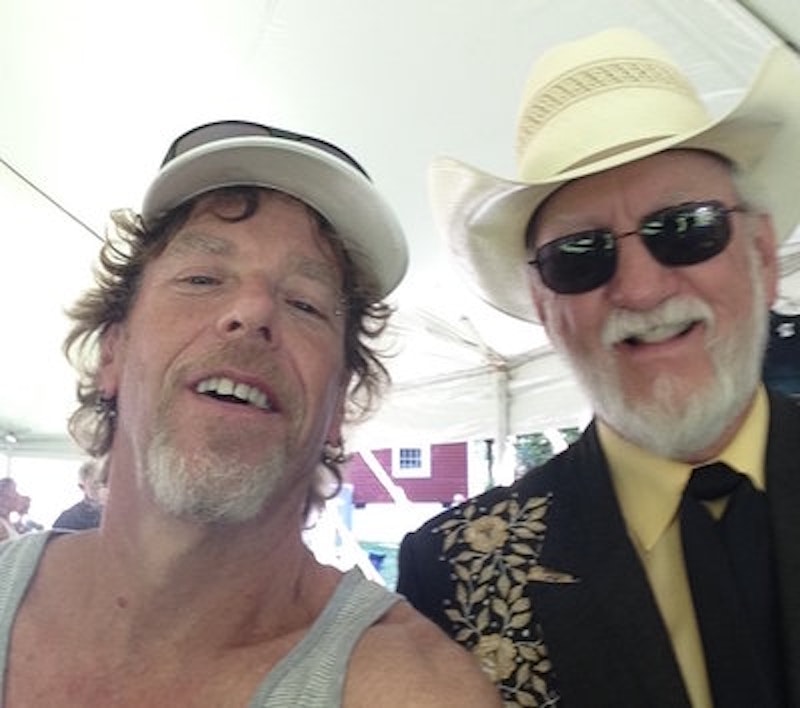 The most beautiful popular music made today is bluegrass gospel. This may strike you as an odd claim on several grounds. Perhaps you don't think about bluegrass as a contemporary form. And perhaps you think “gospel” is a term for African-American religious music, whereas bluegrass is definitely made by white people (who are of course naturally musical). Maybe you wouldn't listen to that corny old-time hick stuff under any circumstances. Whether or not that is bigotry, it's a bad aesthetic mistake.

Gospel has been part of bluegrass music since Bill Monroe and the Bluegrass Boys invented the form in that late 1940s. In Monroe's shows and festivals, he usually performed a section of religious music—“hymn time”—in which the music slowed down and the emphasis shifted from the instruments (mandolin, banjo, fiddle, guitar, and upright bass) to quartet vocal harmonies. As the genre developed, almost every bluegrass act included gospel on every album and show, and many artists specialized in the repertoire, which includes traditional hymns, African-American gospel songs, and original material.

Bluegrass music in general is a rich and wholesome American tradition, not widely-enough appreciated, and even as pop and country shift gears, bluegrass ticks on as a vital and traditional form, with a devoted if relatively small audience. It’s a scene of virtuosity, and if you compared Earl Scruggs to Segovia, or Scotty Stoneman to Joshua Bell, you'd be in the right ballpark. Indeed, I've got a challenge for Bell: let's hear you play "Orange Blossom Special" at the same pace and with the same complexity, propulsion and joy as Stoneman.

Bluegrass also has some of the best singers working in any form: like Jamie Dailey, Russell Moore, Alison Krauss (who came from bluegrass), Junior Sisk, and Dale Ann Bradley. They've made the “high lonesome” Appalachian sound into something at once perfectly-performed and emotionally intense, both traditional and contemporary. Those harmonies will kill you. And redeem you.

Bluegrass has never stopped developing, and from a propulsive, somewhat rough, partly improvised form originating in Appalachia, it has become something perfectly crafted and ravishing, even as it maintains its continuity with the founding figures and material. It’s less rough-hewn and rural than it once was, but it’s even lovelier. Artists such as Junior Sisk and Rambler's Choice, IIIrd Tyme Out, Audie Blaylock and Redline, and Cody Shuler and Pine Mountain Railroad make beautiful traditional American music that’s also fresh.

That’s a defense of the genre. I’m a big bluegrass fan, and often find myself defensive. I've dragged skeptics to bluegrass festivals, strapped them in near the speaker on long car rides, and enthused extremely, often to little or negative effect. But I’m going to urge you to listen to a few songs, for this is the sound that will greet you as you ascend to the kingdom of God, who is a big fan of Doyle Lawson and Quicksilver.

I do think there is something distinctively compelling about art that is made from sincere religious devotion, whether it’s a Buddhist temple, a painting by Duccio, or a gospel song by Sam Cooke or Shirley Caesar. Genuinely spiritual art is devoted not to the artist's ego, but to something outside the self. There’s less preening, less narcissism; it’s seeking after connection, forgiveness, or some larger reality to which the artist is yearning to connect. It’s a way of dealing with pain, and above all it’s a comfort in the face of death.

I was born and raised an atheist: both my parents were in-your-face religious skeptics. In my way, I've always been seeking something. Listening to this music—a lot, for a long time—and being profoundly moved by it, taught me to want to believe. And now I suppose I do, because of the music. That effect isn’t achieved because the stuff is missionary propaganda, but because I experience it as an intense and sincere and beautiful personal and collective expression of devotion to something real, though I myself am still not sure exactly what that is.

Playlist: Some beautiful bluegrass gospel of the last couple of decades.

IIIrd Tyme Out: "Snow Angel," "Drifting Too Far From the Shore."

Dry Branch Fire Squad: "Were You There?"

Audie Blaylock and Redline: "Pray the Clouds Away," "Goodbye"

Alison Krauss and the Cox Family, "I Know Who Holds Tomorrow."

Hot Rize: "Working on a Building."

Doyle Lawson and Quicksilver: "He Made the Tree," "Hiding From the Storm Outside," "Beyond the Sunset," "Where No One Stands Alone."

Blueridge: "I'm Going Up When He Comes Down."

Cody Shuler and Pine Mountain Railroad: "Let's Meet By the River," "How Beautiful Heaven Must Be."

Patty Loveless: "Working on a Building."

Grascals: "Did You Forget God Today?"

Irene Kelly: "Before You Call Me Home."