A new sci-fi subgenre and style mixes darkness with optimism. 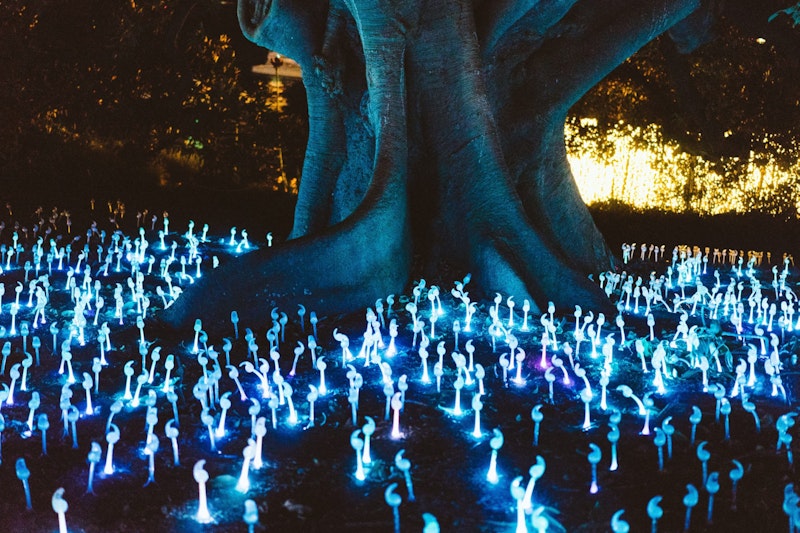 I first became aware of solarpunk through Twitter mentions by economist-blogger Noah Smith, who’s incisively examined the combo of nature and urbanism that characterizes the solarpunk aesthetic. In literature and art, solarpunk has an optimistic vibe, emphasizing sustainable, humane futures; in contrast to cyberpunk’s dystopianism and steampunk’s nostalgia. The suffix “-punk” is affixed to sci-fi subgenres like “-gate” to political scandals, but carries an implication of the protagonist as rebel, which is in some tension with solarpunk’s upbeat tendencies.

Lunarpunk is a recent offshoot of solarpunk, one that similarly depicts improved societies emerging from environmental and sociopolitical crises, but with a different philosophical spin and artistic look. Lunarpunk puts an emphasis on individualism over the communitarian ethos common in solarpunk; it highlights loners who think and act in a recovering world, while still blaming capitalism for much of what went wrong. Like solarpunk, lunarpunk imagines environmentally-friendly technologies; but lunarpunk also seeks the spiritual and mystical, showing future science converging with the supernatural or occult. Unlike the earth colors and daylight of solarpunk imagery, lunarpunk offers nocturnal scenes and strange glows.

Solarpunk is intriguing to me, but has a certain sameness to its visuals, such that I’ve contrasted the field less-than-favorably to the works of Frank Lloyd Wright. Lunarpunk’s images convey a greater sense of mystery, an atmospherics evoked by a collection of bottles I saw in a cave used by World War I soldiers under Arras, France. Disney’s theme-park rendition of the Avatar planet Pandora seems lunarpunk, even if the term’s not used there. Night skies, dark forests and the growing inflow of astronomical imagery all offer inspirations for lunarpunk. If people return to the moon anytime soon, that too will provide material for this aesthetic.

Bioluminescent: A Lunarpunk Anthology (Android Press, Jan. 24) is a collection of stories and poems offering a sense of this subgenre; likely, it’ll help define it, as authors were invited to participate with the expectation that their contributions could shape the emerging field. Lunarpunk’s borders are fuzzy, and its murky location near the boundary of sci-fi and fantasy will be a subject of ongoing discussion. Light generated by living creatures is a theme, hence the book’s name, though that theme’s more evident in some pieces than others; moonlight, starlight, firelight, and sunlight at dawn and dusk, are notable elements as well.

In “I Live Under the Moon,” a poem by Madison Hunter Walker, the narrator looks back on a time of conflict and chaos, exalting the moon as a symbol of everything that humanity eventually realized it couldn’t conquer. Moreover, the moon’s a frequent presence in this person’s life, as people have become nocturnal: “We now breathe in a new eon of man, nature, and science, where humanity burrows underground and rises when the sun slumbers.” In “Moon Bubbles,” a poem by Pedro Iniguez, the satellite has become a place of sanctuary, where “domed cities bouncing with light and the chatter of a hundred languages” are “nestled deep inside hollow craters; profound in depth as they are in solace.” Terrestrial refugees are thankful to live in these bubbles, as war and suffering run rampant on Earth. In “Opening Night at the Museum of Resurrection,” by Charlotte Reynolds, the “oligarchs of the moon” have gathered to witness the blooming of the “first true moonflower,” which they try to present as a spiritual event though they’re focused on price and ownership.

In “The Light,” by J.D. Harlock, Zahra has been mourning for years after her love, Ayami, departed to captain a space mission aimed at reigniting the stars. Now a message is received, suggesting the mission may be nearly complete. It becomes possible for Zahra to look up at the pitch-black night sky and once again feel hope. “The Stranger’s Voice,” by Diane Morrison, follows Maeve, who has an unusual ability to give voice to people’s gods; whether the deities are real or products of a collective unconscious is a question that gets a new wrinkle when Maeve undertakes, for the first time, to channel the gods of an alien species. A robot that serves as translator meanwhile shows unexpected signs of sentience and personality.

“The Memory Shop,” a story by Justine Norton-Kertson, the collection’s editor, centers on Sylvie, who works at a shop where one can buy fragments of other people’s memories. A new civilization has arisen in the century and a half since the worldwide uprising and collapse of fossil fuel empires that began when “the YorubIgbo International Liberation Front ousted Shell from Nigeria in 2025.” But there’s healing still to be done. Sylvie, who’s an empath and speaks in non-binary language such as “S/he,” begins to understand how recollection tech and song spell, at a certain quantum frequency—a mix of magic and science—can “heal not only personal trauma, but generational trauma” lingering from “patriarchal, colonial violence and capitalist climate disasters.”

We live in a strange moment. In recent years, political turmoil has been intense, reminiscent of the late-1960s and early-1970s but with nothing like the cultural florescence of the earlier time. Much spirituality has been distorted by paranoid right-wing fevers like QAnon and the Seven Mountain Mandate. By contrast, a literary and artistic movement offering inclusive visions of spirituality, coupled with an affinity for science and technology, is a healthy development. One needn’t embrace lunarpunk’s anti-capitalist political assumptions to value its optimism and experimentation; its healthy embrace of the dark and mysterious in seeking a better world.