The Fields of World War I

Walking through history in France. 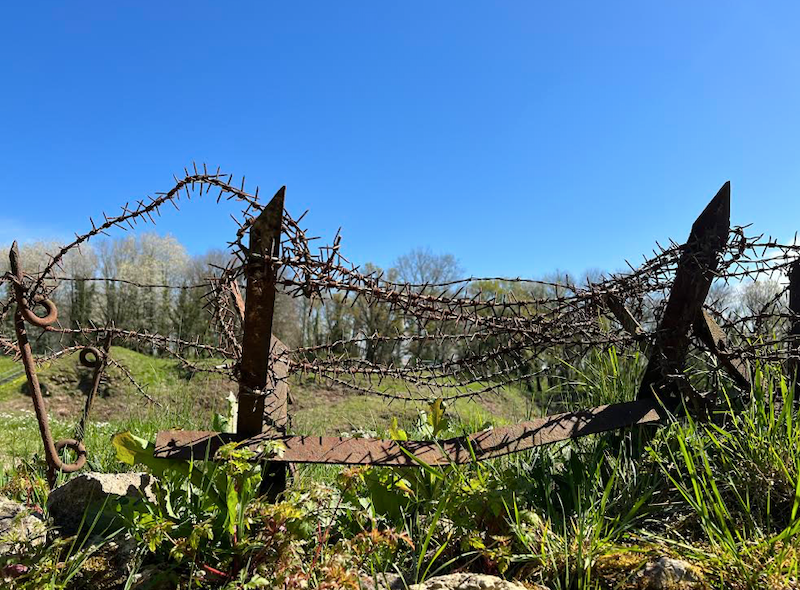 There are intense things to see on the World War I battlefields of northeastern France. The Butte de Vauquois, west of Verdun, is one of the war’s best-preserved battle sites. There was a pre-war village on this hilltop, but it was annihilated. The elevation’s been reshaped by shelling. The French and German trenches are a short walk apart, amid walls, tunnels and barbed wire (the German defenses have a better-engineered look). The enemies fought for years over this small territory. In September 1918, near the war’s end, the Americans broke through.

Human remains are no longer in evidence at Vauquois but can be seen on a vast scale at the Douaumont Ossuary, a brief drive to the east. This is a memorial to the dead of the 1916 Battle of Verdun, both French and German, and overlooks an enormous French military cemetery. Some 130,000 dead are inside the building. If you look from outside through certain windows set low to the ground, you encounter a sea of bones, including skulls facing you at close range.

This was our family vacation in mid-April. Our 12-year-old son, a history buff, had expressed an interest in seeing World War I sites on an expected trip to France to visit my sister and niece, who live in Paris. I’d asked David Frum for suggestions, as he’d traveled the front with his own son several years ago, and on David’s advice added Verdun to our initial thought of the Somme. We arranged a four-day tour for our family of five, led by our excellent guide Sylvestre Bresson, whose firm Terres de Mémoire (“Fields of Remembrance”) specializes in sites of both World Wars. This tour was the centerpiece of a trip that also included time in Paris, as well as day trips to Versailles and the walled, medieval town of Provins.

Our first stops were in the Somme, a couple of hours north and slightly east of Paris. The Somme’s one of France’s hundred or so “departments,” or administrative areas, with a river of the same name. In 1916, after the Germans attacked further south toward Verdun, the Allies undertook an offensive in the Somme, with forces from Britain and its then-colonies playing a leading role. The Battle of the Somme was inconclusive, whereas the Battle of Verdun eventually was a French victory. Both battles lasted months and brought extraordinary carnage.

We stopped first at the Devonshire Regiment Cemetery, where 160 men were buried in the trench from which they attacked. This is British territory. After the war, British authorities chose to leave their dead in place, rather than transport them throughout the far-flung Empire, and France granted sovereignty over burial sites to Britain and its former Dominions; on this trip we entered areas belonging to the U.K., Australia, Canada and South Africa. (The U.S. has a different arrangement. The American superintendent at the Somme American Cemetery in Bony told us the site is managed by the U.S. government but remains French territory.)

Just a few minutes from the Devonshire site is a German war cemetery in the village of Fricourt. The German cemeteries have a different feel: starker, less commemorative. Rather than just grass, they tend to have trees growing amid the graves, a style I prefer. Sylvestre pointed to two large stone blocks and told us that they were intended, during the German occupation in World War II, to become the pedestals of statues of German soldiers. Hitler, injured in the Somme in World War I, visited this cemetery, along with his better-known trip to Paris in the aftermath of France’s defeat in 1940.

An elderly French man followed us into the cemetery. It turned out he was a just-retired farmer who lived next door and had a passion for wartime history; he was developing an exhibit with the local library. He invited us to his farm, but our schedule was too tight.

From there it’s a short drive to the Lochnagar crater, a vast pit created by a British mine under German lines at the start of the Somme offensive. The nearby town of Albert includes the excellent Somme 1916 Museum, housed in a centuries-old tunnel. North of Albert is the Beaumont-Hamel Newfoundland Memorial, a battlefield with a statue of a caribou, symbol of the Royal Newfoundland Regiment. Here one finds a fenced-off “red zone,” set aside as too damaged or dangerous. A distant tree cluster marks the site of a wartime explosion.

On Easter morning, the tour’s second day, we visited Delville Wood, a South African memorial. We walked amid woods, fields and wildflowers, the trenches now just gentle slopes. This is a beautiful place of recovery and hope. In 1916, South African forces serving with the British came under withering artillery fire that killed most of them and destroyed the forest. The “last tree,” a single hornbeam that survived the battle though hit with bullets and shrapnel, is still alive, and around it, nature has grown back.

The nearby town of Pozières includes an Australian memorial, monuments to tanks and animals, and a café called Le Tommy, which has an impressive collection of machine guns and other equipment retrieved from local battlefields. Not far away is the Thiepval Memorial to the Missing of the Somme, currently under renovation but with a museum that’s open.

Some 40 minutes north is the small city of Arras. Here one can visit the Wellington Quarry, an underground complex that housed British and Dominion forces. This is a unique museum in which one goes 60 feet underground. The site was a medieval chalk quarry that had fallen into disuse, but New Zealanders, including Māori, created new tunnels to approach the German positions; in World War II, it was a bomb shelter. One sees various artifacts and graffiti. Images projected on the walls tell part of the story; one showed an Easter service held for the soldiers.

On the third day, we went to the Hindenburg Line. This was a German defensive position that was breached by the Allies in late-September 1918. It ran along a canal and tunnel from 1810, which are still in use and were reminiscent of America’s near-contemporary Erie Canal. We walked over the Riqueval Bridge, seeing an empty hillside that once swarmed with soldiers.

From there it was onto the Somme American Cemetery. This is a peaceful locale, but the superintendent pointed out that the architect engraved some details evocative of war and violence, to convey that this isn’t a place one should aspire to be. We visited the Maissemy German cemetery, which is vast; I spent some time inside a mausoleum. After our visit to the Butte de Vauquois, we went to the Montfaucon American Monument and walked up to a nearby ruined church that includes remnants of German bunkers.

Our last day included the Bois des Caures, a wooded area where a French colonel named Émile Driant, who was also a writer and politician, died early in the Battle of Verdun leading a heroic defense against an overwhelming German force; his superiors had ignored his warnings that the area was vulnerable. The Germans buried him with honors and sent a respectful letter to his wife. Near the Douaumont Ossuary, we saw the Trench of the Bayonets, where a myth arose that a French regiment had been buried alive, based on bayonets sticking out of the ground. Nearby, we went inside the Douaumont Fort, which fell quickly and was recaptured at great cost.

It was sobering to consider that even this intensive tour covered only a small fraction of World War I’s battlefields and cemeteries.