Look to the Stars

An astronomical guidebook highlights an age of discovery. 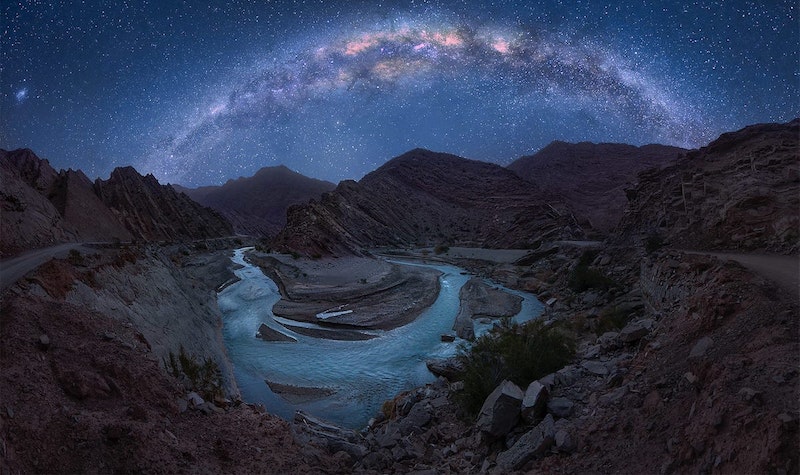 About 40 years ago, I got my clearest look at the Milky Way. In my teens, I’d often visit a family in Puerto Rico with whom my father did business in the bean industry; one branch of that family had a 46-foot fishing boat they’d take for excursions to the Virgin Islands or other Caribbean spots. One night I looked up from the boat and saw the great band of light across the sky. I could see why, as Carl Sagan recounted, the !Kung people of the Kalihari had called it the “backbone of night,” which artist Jon Lomberg dramatized for Sagan’s Cosmos series.

A splendid book arrived recently and brought that long-ago sighting to mind. National Geographic Stargazer’s Atlas is an information-rich volume about celestial phenomena and how to view them, illustrated with photos, star-charts and artwork. Its opening pages include a photo spread of the Milky Way as seen from Easter Island, the galactic lights in contrast to a dark row of stone moai silhouetted against the horizon. Paintings show scenes that cameras and telescopes can’t, such as the asteroid impact thought to have killed the dinosaurs, or a view from the surface of Proxima b, a planet orbiting red dwarf Proxima Centauri, closest star to our sun, with twin stars Alpha Centauri A and B visible in the distance.

The book’s by Andrew Fazekas, who’s reported regularly on the night sky for National Geographic, along with physicist James Trefil and science writers Maya Wei-Haas, Rachel Brown and Michael Greshko.

The discovery of exoplanets, worlds around other stars, is “one of the most profound scientific developments of the last 30 years,” the book states. More than 4500 have been identified. Most differ vastly from Earth, such as Alpha Tauri B, which is at least 6.5 times Jupiter’s mass and orbits red giant Aldebaran, in the constellation Taurus. The authors point out, though, that Proxima b, some 1.3 times Earth’s mass, “excites researchers because of its closeness to our solar system and possible tolerance of life. If habitable conditions can be found in the star system next door, how common could they be throughout the universe?”

People have compiled astronomical data for millennia. The book has a chapter on archaeoastronomy, the study of how ancient cultures interpreted the sky and built structures oriented to it. Another chapter’s on astrotourism, a travel field focused on reaching dark-sky sites or particular events such as solar eclipses. After I’d begun perusing the Stargazer’s Atlas, I visited the Met Museum’s House of Tudor exhibit and saw a rare 1540 book, Astronomicum Caesarium, which was gifted to Henry VIII; that book held to an Earth-centered model of the solar system, as Copernicus published his heliocentric theory three years later.

No doubt, some aspects of the Stargazer’s Atlas will become obsolete as well, amid discoveries from telescopes and space probes. The authors point out that the past decade has “seen a revolution in our understanding of the Milky Way.” The European Space Agency’s Gaia space telescope since 2013 has pinpointed the locations of 1.7 billion stars within our galaxy, measuring motions of 1.3 billion of them and distances from Earth of 100 million. “When complete,” the authors write, “this data set will essentially let astronomers create a 3D movie of the Milky Way in motion, which will help scientists decipher the deep history of the galaxy.” One discovery so far is that many stars in our galaxy didn’t originate here, but resulted from a merger with a smaller galaxy, called Gaia-Enceladus, billions of years ago.

A couple of decades ago, I spent some time with some colleagues from Space.com standing on a Manhattan sidewalk with a telescope, inviting passersby to take a look. Despite the sub-optimal, well-lit location, we impressed people with what they could see of Jupiter and Saturn. A few years later, a documentary film called A Sidewalk Astronomer came out, highlighting a former monk who’d enabled such participatory stargazing in travels around the world.

Looking at the stars, planets and other celestial phenomena is a healthy practice, overall. It infuses wonder and perspective. Humans may or may not start living in space in significantly larger numbers in the coming decades, but knowing vastly more about the universe, and seeing parts of it never seen before, are benefits that current and upcoming generations can expect.