Bloodletting is for mopey adolescents of all ages. 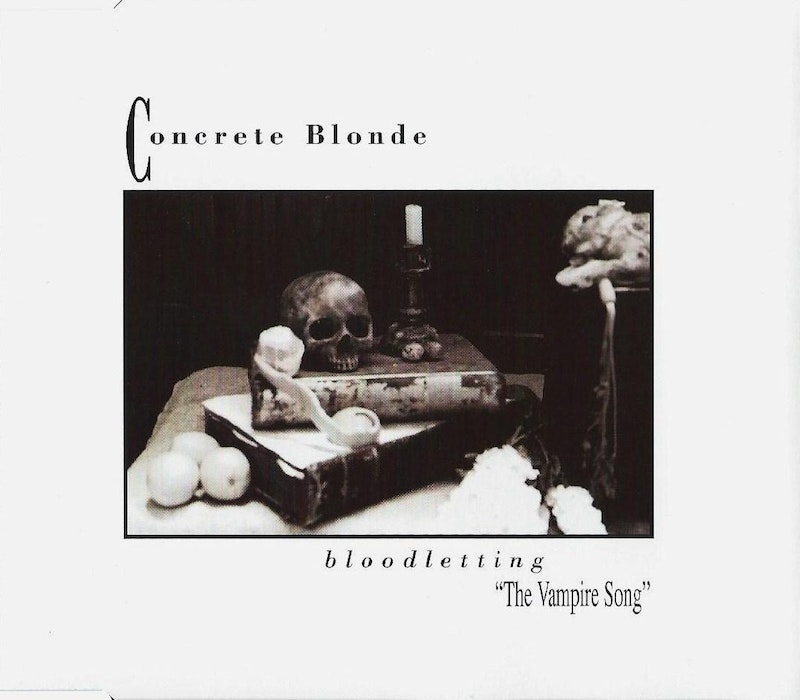 Goth as a genre is mostly supposed to be for broody teens with black eyeshadow, hunched posture, and outsized emotional turmoil. It’s a Dracula cloak you’re supposed to grow out of, not into. I was no goth in my youth, but the music has since gotten its fangs into me—mostly via my wife, a broody moper from way back. In particular, she’s introduced me to Concrete Blonde’s 1990 classic Bloodletting.

As the title of their signature album indicates, there’s nothing subtle about Concrete Blonde. Johnette Napolitano has a stentorian, operatic soprano expressly designed to raise the ghouls from their crypts and shatter the car windows of traitorous (and no doubt mopey) exes. And on track after track, she shatters those exes and raises those ghouls. Napolitano had suffered a miserable break-up in the run-up to the album, and the songwriting is about as subtle as having your heart broken with a pick-axe. “Love is the leech, sucking you up/Love is a vampire, drunk on your blood/Love is the beast that will suck out your heart,” she bellows on “The Beast” as Paul Thompson’s drums stomp remorselessly ahead like the evil Terminator and James Mankey’s guitar growls like—like a beast.

There’s some variation in pace and tone. “The Sky Is a Poisonous Garden” ramps up to rockabilly speed and swathes its doom and gloom in jittery cool, tossing in an impressively distorted classic rock guitar solo. “I Don’t Need a Hero” is a slow burn, with Napolitano willfully restraining herself so her voice takes on a smokey tinge. When she declares “I don’t need a hero,” she sounds like she’s trying to convince herself and not really succeeding. It’s “I Will Survive” for those who don’t really expect to.

The album’s big hit is “Joey,” and it’s no wonder. It’s an anthemic tribute to a confused, messy relationship soaked in nostalgia, addiction, and heartbreak. Napolitano is all seduction as she whispers, “Joey, honey, I got some money”—and then unleashes the power of her battle station as she wails “And when you said I scared you/Well I guess you scared me too.” It’s a song which feels all the feelings with such bombastic determination that your mascara is left in a sad little puddle on the floor.

Great as “Joey” is, though, “Tomorrow, Wendy” is better. It was originally written by Andy Prieboy as a tribute to one of his childhood friends—a woman who became a sex worker to support an addiction and ended up contracting AIDS. The song lyrics are her conversation with herself before her suicide.

Napolitano provided a vocal assist on the original, extremely affecting, version. But there’s really no substitute for having her sing the whole thing. It’s probably Napolitano’s greatest moment on record; her vocals are a tide of rage, despair and regret. “Don’t count on any second coming/God got his ass kicked the first time he came down here slumming,” sounds arch in Prieboy’s original. Napolitano, though, puts it across like a bitter triumph—a victory for godlessness and grief in a world that wants you to turn your eyes away from both.

Goth isn’t a subtle genre in general, and “Tomorrow, Wendy,” in particular, is a big ball of hyperbolic pain. We tend to see that as a hallmark of adolescence, when every setback seems like the end of the world and every failure seems like the last. Then you grow up and realize that sometimes life really is just that hard. Napolitano was in her early-30s when Bloodletting was released; I’m over 50. I don’t know how old Wendy was when she died. But Concrete Blonde’s best album is ageless. You never grow out of moping, which is just another name for sorrow.